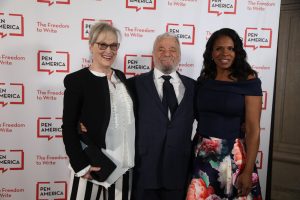 (New York, NY) — PEN America and its Members across the country today mourned the passing of musical mastermind Stephen Sondheim, who died at age 91. The visionary behind Company, Follies, Sweeney Todd, and countless other masterworks of the American stage, Sondheim was the winner of Tony Awards, a Pulitzer Prize, an Academy Award, and the Presidential Medal of Honor.

In 2017, Academy Award-winning actress Meryl Streep, who starred in the 2014 film adaptation of Sondheim’s Into the Woods, presented him with the 2017 PEN/Allen Foundation Literary Service Award at the PEN America Literary Gala.

“There are not enough superlatives to do justice to Sondheim’s talent and his life’s work,” Streep said of Sondheim at the 2017 PEN America Literary Gala. “He has already won nearly every award that exists in every category you can imagine, many times over. But it’s hard not to see special meaning in Stephen receiving this award, this year. Because his imagination has provided a soundtrack for a half century of American life, challenging and elevating our uniquely American art form, the American musical.”

“When I first heard that I was to receive this award, I was not only honored, but startled. I write songs for musicals, for God’s sake—musicals, the runt of the arts. Not poems, not novels, not essays, not works of history: songs,” Sondheim said. “I can’t say that A Little Night Music or Follies has helped to oppose repression or champion humanity. But then I thought: There are other repressions besides political ones. There’s the repression of imagination fostered by parents who don’t understand or teachers who aren’t interested.

“That’s why I and some other writers at the Dramatists Guild started the Young Playwrights Festival over 30 years ago—a competition open to writers 18 years and younger from every state in the country, and their winning plays get professional productions Off-Broadway. And that’s where PEN [America] comes in: an organization that defends freedom of thought and expression. Young people here need that freedom just as much as oppressed writers in other countries, only in a different way. So maybe this award isn’t quite as startling as I thought, if I can share it with my cohorts over the years at Young Playwrights. I’m also glad you like my songs.”

Tributes to the late composer and songwriter poured in from around the world. Said PEN America Trustee Lynn Nottage on Twitter:

Sadness. A true genius exits. I’m in theater ‘cuz #StephenSondheimRIP opened a door. In 1982, I was 1 of 4 teen composers selected for the Young Playwrights Festival he founded. He changed my life. I hold onto the support he unexpectedly showed me throughout my career.