(NEW YORK)– PEN America has found that the Collier County School District in Florida has attached a warning to the description label on over 100 books listed on the district’s online library catalog and physical labels were affixed to hard copies of the same books. The books receiving these warnings disproportionately include stories featuring LGBTQ+ characters and plot lines and titles about communities of color.

Jonathan Friedman, director of free expression and education programs at PEN America, said in response: “This alarming development is just the latest in an onslaught of attacks against students’ freedom to read in Florida. Even if access to these books is not technically restricted, the labeling of these books risks attaching a stigma to the topics they cover and the books themselves. Under the guise of ‘parental rights,’ interest groups have been empowered by opportunistic elected officials and are now hijacking public schools. Every child deserves the right to learn from a diverse set of voices and perspectives, and to freely access the books they wish to read.”

Children’s books such as Everywhere Babies by Susan Meyers and Julian is a Mermaid by Jessica Love were among titles labeled with a warning. In addition, authors targeted include Maya Angelou, Toni Morrison, George Johnson, Ibram Kendi, Ellen Hopkins, Ashley Hope Pérez, Jodi Picoult, Jason Reynolds, Arundhati Roy, and John Updike–among many others.

PEN America found that a warning to parents was inserted alongside a total of at least 110 titles in the school’s online catalog, saying, “this book has been identified by some community members as unsuitable for students.” 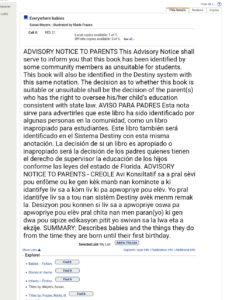 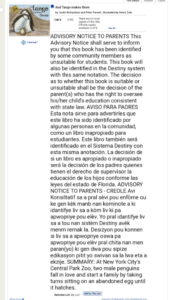 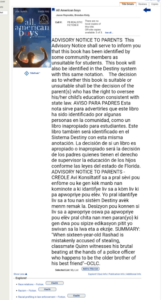 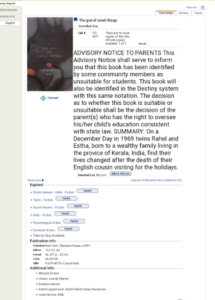 Among the books that have this warning in the catalog:

Ace of Spades by Faridah Àbíké-Íyímídé

Clap When You Land by Elizabeth Acevedo

The Haters by Jesse Andrews

Me and Earl and the Dying Girl by Jesse Andrews

I Know Why The Caged Bird Sings by Maya Angelou

What Girls Are Made Of by Elana K. Arnold

Thirteen Reasons Why by Jay Asher

The Black Flamingo by Dean Atta

Cinderella Is Dead by Kalynn Bayron

Black Girl Unlimited: The Remarkable Story of a Teenage Wizard by Echo Brown

A Phoenix First Must Burn by Patrice Caldwell

Once & Future by A. R. Capetta and Cory McCarthy

Something Happened in Our Town by Marianne Celano, Marietta Collins, and Ann Hazzard

The Miseducation of Cameron Post by Emily M. Danforth

This Book Is Gay by Juno Dawson

The Vincent Boys by Abbi Glines

Seeing Gender: An Illustrated Guide to Identity and Expression by Iris Gottlieb

Looking for Alaska by John Green

Water for Elephants by Sara Gruen

Dead Until Dark by Charlaine Harris

Sex: A Book for Teens: An Uncensored Guide to Your Body, Sex, and Safety by Nikol Hasler

Ask Me How I Got Here by Christine Heppermann

The You I’ve Never Known by Ellen Hopkins

Being Jazz: My Life as a (Transgender) Teen by Jazz Jennings

I am Jazz by Jazz Jennings and Jessica Herthel

The Breakaways by Cathy G. Johnson

How to Be an Antiracist by Ibram X. Kendi

Beyond Magenta: Transgender Teens Speak Out by Susan Kuklin

Another Day by David Levithan

Every Day by David Levithan

Fly on the Wall: How One Girl Saw Everything by e. lockhart

Julián Is a Mermaid by Jessica Love

When Aidan Became A Brother by Kyle Lukoff

A Court of Mist and Fury by Sarah J. Maas

Unravel Me (Shatter Me Book 2) by Tahereh Mafi

The Truth About Alice: A Novel by Jennifer Mathieu

Kiki: Doin’ It by Ayshia Monroe

The Bluest Eye by Toni Morrison

The Infinite Moment of Us by Lauren Myracle

All the Bright Places by Jennifer Niven

Out of Darkness by Ashley Hope Pérez

The Stars and the Blackness Between Them by Junauda Petrus

Stamped: Racism, Antiracism, and You by Jason Reynolds and Ibram X. Kendi

All American Boys by Jason Reynolds and Brendan Kiely

And Tango Makes Three by Justin Richardson and Peter Parnell

Being Transgender by Robert Rodi and Laura Ross

The God of Small Things by Arundhati Roy

If I Was Your Girl by Meredith Russo

They Both Die at the End by Adam Silvera

More Happy Than Not by Adam Silvera

The 57 Bus: A True Story of Two Teenagers and the Crime That Changed Their Lives by Dashka

Odd One Out by Nic Stone

It’s Not Like It’s a Secret by Misa Sugiura

This One Summer by Mariko Tamaki and Jillian Tamaki

The Hate U Give by Angie Thomas

It Feels Good to Be Yourself: A Book About Gender Identity by Theresa Thorn

Rabbit Is Rich by John Updike

The Glass Castle by Jeannette Walls

The Art of Being Normal by Lisa Williamson

Doing It!: Let’s Talk About Sex by Hannah Witton