Trump abuses his power and violates the First Amendment, again

The Post reports: “President Trump raised a familiar complaint — ‘unfair’ coverage by CNN — in a pair of Monday-morning tweets. But this time he took the unusual step of calling on supporters to boycott the cable news network’s corporate parent, AT&T, to drive his point home.” He argued: 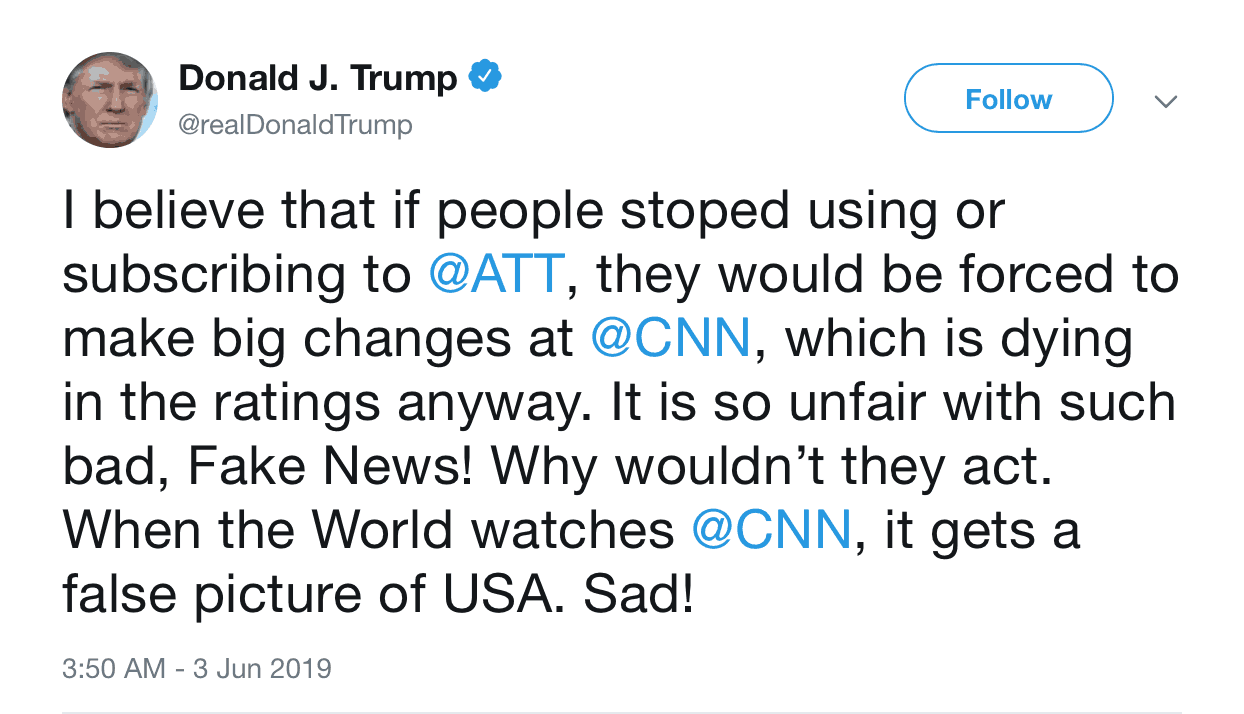 This is not the first time, of course, Trump has used the power of his office to punish those seeking to exercise their First Amendment rights. It’s not even the first time he has violated CNN’s First Amendment rights. The Post recounts, “Trump was vocal in his opposition to AT&T’s $85 billion acquisition of Time Warner. .  .The Justice Department sued to try to block the deal on the grounds it violated antitrust laws, but a federal appeals court upheld the merger in late February, giving the entertainment giant WarnerMedia extensive power over a wide array of television, film and video game properties.” News reports suggested that Trump “had asked the director of the National Economic Council to persuade the Justice Department to block the combination. Gary Cohn, who held the job at the time, reportedly refused.” (Here too the White House has refused to provide documents demanded for congressional oversight. Perhaps it is time to call Cohn as a witness.)

A lawsuit, PEN America v. Donald J. Trump, alleges that the president has been engaged in an unconstitutional campaign to silence dissent by using the regulatory powers of the federal government to punish media he doesn’t like. A large part of this campaign has included the president’s attacks on AT&T, including bringing an antitrust action against it, in retaliation for coverage he doesn’t like on CNN. His revocation of reporter Jim Acosta’s press pass, his threats to “pull the license” of NBC and his threats to increase shipping costs for Amazon, whose founder and chief executive is Jeff Bezos, owner of The Washington Post, are but a few of the actions Trump has taken.

Ian Bassin, executive director for Protect Democracy, which is counsel for PEN America, tells me, “The president’s attacks on our free press are straight out of the authoritarian playbook. This is how Vladimir Putin operates and how Viktor Orban forced critical media in Hungary to yield to his consolidation of power.”

He adds, “It’s fundamentally un-American and is surely making our Founders roll over in their graves.”

You don’t have to be a lawyer to see that Trump’s threats of economic retaliation, encouraged from the White House by use of Trump’s bully pulpit, make the PEN America case that much stronger. The new tweeting underscores that Trump will use what levers of power and whatever venue he is afforded to muffle dissent and thereby chill the speech of other critics.

This conduct — brazen disregard and violation of the First Amendment — is the kind of conduct that, while not illegal per se, does violate Trump’s constitutionally mandated role. The Constitution obligates Trump to “take Care that the Laws be faithfully executed.” He took an oath to “preserve, protect, and defend the Constitution of the United States.” In an ideal world in which Republicans took their constitutional obligations seriously and did not put fealty to Trump above loyalty to the country, they would join in condemning such conduct and include this in the long list of offenses that more than justify his impeachment. Unfortunately, Republicans these days care no more about the First Amendment right of critics than they do about obstruction of justice.