Facilitated by literary advocacy group PEN America, the chat brings together entertainment experts to discuss the history of on-screen depictions of Muslims in love.

A recent wave of critically acclaimed screen projects from Muslim-American men—Hasan Minhaj’s “Homecoming King,” Aziz Ansari’s second season of “Master of None” and Kumail Nanjiani’s “The Big Sick” among them—have been criticized by people within the diaspora for erasing Muslim women, privileging Whiteness and rehashing stereotypes. Arts advocacy group PEN America is moderating a Twitter chat at 1 p.m. EST today (August 8) that weighs these debates alongside the controversial “Aladdin casting and recent violence against Muslim communities to explore the importance of these stories in representing Muslim Americans as they are: nuanced, capable and deserving of love. 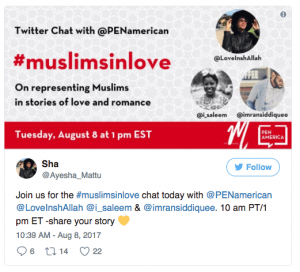 The #MuslimsInLove chat will include experts and invite user questions about how Hollywood represents Muslims, ranging from demonization as terrorists to the present-day progress and a future that better addresses the complexity of Muslim Americans.

“Representing Muslim women and men in stories of love and romance matters—particularly at a time when Muslims are frequently targets of hate crimes (like Saturday’s bombing of a mosque in Minnesota) and rarely depicted as multi-dimensional people,” reads the Facebook event description.

According to its website, PEN America supports a variety of campaigns designed to fight discrimination in the literary world. It presents the #MuslimsInLove chat through its web series “The M Word,” which features Muslim-American writers discussing their work and racist perceptions of it.

Join the chat by tweeting your own love stories with the #MuslimsInLove hashtag. And prepare for the chat by watching Siddiquee’s 2014 TEDx talk, “How Hollywood Can Tell Better Love Stories.”