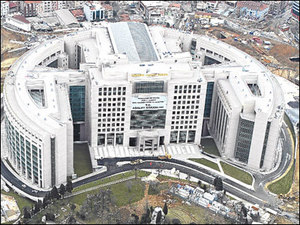 Yesterday at the Çağlayan Courts of Justice, Europe’s largest courthouse, situated in İstanbul, I sat and watched as a judge set aside expert opinion that would have ended the trials against the publishers of the Turkish editions of William Burroughs’ The Soft Machine and Chuck Palahniuk’s Snuff. Instead they, and the books’ translators, face three more years of uncertainty after the judge pronounced that the trial would be postponed until 2015. Meanwhile he warned that if either of the publishing houses or the translators were foolish enough to publish further “obscene” works, these cases would be added to the charge sheet.

We had come to the court in high spirits. Although the Sel Publishing House which had published Burroughs, has had around seven similar obscenity cases brought against them in recent years—among them books by European authors including Apollinaire—all the cases had ended with acquittal. The law, as it stood then, exempted books seen as “literature” from obscenity charges. The pattern, until today, had been that the judge would send the offensive book to experts, usually professors of literature, and if they stated that the work was of literary merit, the charges would be dropped. Once again, the experts agreed that The Soft Machine and Snuff are “literature,” so, as we waited outside the court room, our expectation was that the hearing would be a formal acknowledgement of their opinion and we would leave for a celebratory cup of coffee.

But no, instead the judge told the court that new laws had been passed under a legislative reform package, and that, as a result, he was unable to pass judgement. Instead he was required to postpone the case for three years. Apparently the reforms demand that any media offenses that are currently in process should be postponed so that they can be reconsidered under the new laws, which will undergo further reforms in the coming three years.

That is bad enough, but the judge’s next warning to Irfan Sancı, the owner of Sel Publishing House, and Namık Süha Sertabiboğlu, the book’s translator, was more ominous. If either of them publish or translate a similar work in the next three years, they can expect to have those works added to the charges against them.

As the judge broke the news, there were gasps of shock and anger. The defense lawyers argued, Irfan Sancı argued. Suha Sertabiboğlu sat in silence. The hearing lasted 20 minutes before the judge closed the dossier and called in the next case. We stayed put as Hasan Basri Çıplak, the head of Ayrinti Publishing House, Palahniuk’s publisher, entered the room. He had obviously been warned of the bad news and he arrived in bullish form, instantly launching into an argument with the judge. He too was told that his case was postponed for three years and warned not to publish more similar work. Çıplak’s response was to hand the judge a gift—copies of two more books that he had published since Snuff: The Wild Boys by Burroughs and Pygmy by Palahniuk.

Burroughs’ readership in Turkey and elsewhere is a small, specialist group, one that knows what it is in for when they buy the book. It is not an easy read but it is not pornography, as the Turkish experts agreed. Sel told me that in fact some people have bought Burroughs not because they want to read him necessarily, but in solidarity with the publishers. Palahniuk’s books are popular. Despite the court case—or maybe because of them—Snuff is in its 14th edition and Pygmy—no doubt in line for prosecution too—has gone to its second print run.

But for how long will the Turkish reader have the freedom to read what their friends in Europe can buy? I have met brave, feisty writers, publishers and translators here in Turkey who will take on this challenge and not be intimidated, but how many others will decide that this is not a risk that they want or are able to take?

This article was originally posted on the PEN International website.