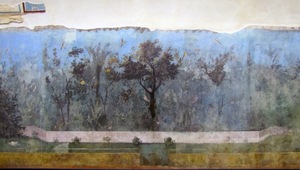 This week in the Guernica/PEN Flash Series, we feature a piece by Karissa Chen. Subscribe to the series and get new flash delivered to your inbox twice a month—no spam or news, just stories.

Laila holds the wedge out to me, a honeycomb of jewels. Winking in the summer light. Capsules like love, like blood, like angry tears. Here, Grandpa, she says. Her chubby fingers slick with juice. Her chin dribbling.

I shake my head no. I say, You eat it, xin gan bao bei. My heart, my liver, my little treasure. She crouches in the grass, picking out individual seeds with her small finger, like she is scratching scabs. She rolls each one between her thumb and index. Eyes it, holds it to her lashes, tries to see through them. Red-tinged world.

Xin gan, bao bei, treasure, heart, liver. The night before I left our village, my mother had held me close to her breast. I was thirteen, the top of my head just beginning to pass her chin. She smelled like flour and oranges. Elsewhere, boys only a little older than me were dying, bleeding, calling for their mothers, dead. I didn’t know anymore who was doing the killing—the Japanese, the Communists, the KMT, my neighbors, my uncle, my father. My mother pressed me closer. Away from here, you will be safe.

Laila digs into the ground with a stick, a tangle of grass and dirt. She spits pomegranate seeds into the hole. They’re white, stripped bare. Like tiny grains of rice. I’m planting a tree, she says. Then we can eat all the shi liu we want.

My body recoils, curling into itself. But I say, Clever, bao bei.

Shi liu, pomegranate. That last morning, my mother pressed a large one into my hands, the lone fruit birthed by the tree in our courtyard. A snack for the road, a war-time treat, red like luck, like happiness, like New Year wishes. I’d never held such a precious thing before. Think of this as a school trip, my mother said. The cart was filled with other children. An overcast sky. My mother stood by the road, hands wrung into her shirt. No matter what, come home, my mother said. When you’re fourteen, fifteen, sixteen, sixty. I will wait for you.

Laila is counting the seeds she’s collected in the hole. First in English, then in Chinese. Whispers like prayers, like blessings. What are you doing? I ask, and Laila says, I’m counting sixteen seeds. If I plant sixteen pomegranate seeds, they’ll all grow.

Shi liu, pomegranate. Shi liu, sixteen. By sixteen, I am alone, motherless in Taiwan, with no way back to the mainland. Liu shi, sixty, and I am old, I am in America, far from home, I am watching my granddaughter pluck sixteen rubies to grow.

I remember: My friend’s mother had given him a hardboiled egg for the journey. Squeezed next to me in the cart, he rolled it along his thigh, back and forth. My mother smiled from the road, her hands pressing her elbows. She looked like the thin white birch that lined our village. I cupped the pomegranate in my palms, brought it to my nose. Inhaled its earth. I wondered if there would be more fruit by the time I returned.

Laila pushes dirt into the hole, pats it into a little mound. She sprinkles pith on top, a cracked red piece of rind.

That leather, that red-brown skin, that powder beneath my nails. I was hungry, I was thirsty, I couldn’t wait. The cart began to move. The fruit split open to white membrane, crimson abundance, its juice wetting my fingers. I bent down to lick my hands, to slurp the sweetness.

Laila stands and brushes dirt off one hand, her other hand still holding pomegranate, her shorts stained red and brown. A few lonely pods remain, standing out like ruby teeth.

Shi liu like blood. Shi liu like home. Shi liu, trove of pain and blame. The cart was gaining momentum. My friend nudged me, said, Your mother is waving, but I was biting, savoring the burst of red honey on my tongue.

When I looked up, we were rounding the bend. My mother was gone.

Laila runs up to me, holding out the last of the fruit. Grandpa, she says. Eat, eat, I urge her. She shakes her head, looking back at the mound. For good luck, Laila says. They won’t grow unless you eat too. I stare at her, at her lips stained red. Grandpa, she pleads, her wrist shaking gently in my face, I want them to grow. Laila, her name sounding like coming, like arrived, like I am here. My mother’s eyes, my mother’s mouth. Grandpa, she says once more, and waits. Three seeds gleaming in her palm.