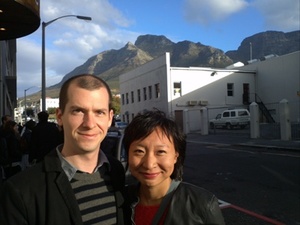 A former journalist, Cathy Park Hong traveled to South Africa on behalf of PEN American Center as part of a programmatic exchange with South African PEN that is supported by the Ford Foundation and the Jerome L. Greene Foundation.

My husband and I arrived in Cape Town a few days before the Open Book Festival. We came on a sleepy Sunday, when everything in the city was shuttered. We managed to find the Open Book Festival headquarters and bookstore, Book Lounge, which was like visiting a grand, warm-wooded home owned by bibliophiles. Here we met Frankie Murrey, who is one of the chief organizers of Open Book. Over the next few days, my admiration for Frankie grew exponentially: she was everywhere at once and she handled everything with humor and panache. I wish she had a doppelganger in New York so I could hang out with her.

Since the festival was still a few days away, we drove out to Simon’s Town and stayed in a charming solar-powered cottage. Simon’s Town is minutes from Cape Point, which is a spectacular nature reserve at the tip of South Africa. We drove to the reserve and hiked to the top of Cape of Good Hope, which is a towering sandstone cliff that drops dramatically down to the crashing Atlantic. Also at the park, we came across all kinds of animals like penguins (actually called African “jackass” penguins), antelope, and ostriches. We also came across baboons that we stayed away from since they will steal your food and your iPhones. Not only are they aggressive, they are also tech-savvy (if you have one of those Androids, they’ll just sniff at you and leave you alone).

We returned to Cape Town on Wednesday. Cape Town is a beautiful city tucked between the famously soaring Table Mountain and the beach. It has a laidback San Francisco vibe and it’s full of wine bars and international restaurants. It’s an amazing city and I wish I could have been there for a month since I felt that I barely skimmed Cape Town’s surface during my week there.

It was fascinating to hear how South Africa was transitioning and how people were both exhilarated and frustrated by the progress since ‘94. I read my poetry at the Springfield Convent high school with Toni Stuart, who’s a passionate and sensitive South African poet, performer, and journalist. I loved reading with Toni at the high school: the students were enthusiastic and full of questions. On our drive to school, Frankie and Toni told me how integration in Cape Town has been slow. Table Mountain acts as a natural boundary between the townships and Cape Town and unlike Johannesburg, the city has yet to establish a viable black middle class.

Transition and freedom of expression appeared to be the main theme during the Open Book Festival (or at least from the talks that I attended). I read at a panel with PEN Freedom to Write Fellow Deji Olukotun and Vice President of South African PEN Margie Orford. What dominated the conversation was South Africa’s post-democracy failure to lift up the literacy rate. In another panel, Antjie Krog gave a brilliant speech about the importance of literature in politics and how the arts were an essential factor in the South African democracy movement. Since then, however, government has left the arts movement in a lurch. She said: “Literature inflects the anguish of reality in a way that theoretical discussions of the same issues cannot achieve, making possible a kind of understanding not accessible by other means.”

It was eye-opening talking to other writers in Cape Town. PEN’s own Deji gave me so much compassionate insight into his own experiences as a grad student in Cape Town. He also gave a fantastic riveting performance reading his short story with Lionel Shriver, Rustum Kozain, Lola Soneyin, and Anjali Joseph. Margie Orford was also brilliant and inspiring in her advocacy for literacy and her challenges against censorship in the digital era. Overall, I had such a vigorous and mind-blowing cultural exchange in the Open Books Festival. On Friday eve, I read from my collections Engine Empire and Dance Dance Revolution. The effervescent Helen Moffet moderated the event and brought so much infectious energy to her questions. Afterwards, I was so moved by the audience members who came up to me and discussed their own sparked ideas of weaving Zulu and English into their poetry. South Africa, with its eleven official languages and scores of unofficial languages, would be a dynamic cradle of multilingual poetry. I went out for drinks with Deji and a few of his SA grad school friends who talked about the towering international influences of Coetzee and Gordimer and how, despite this, post-apartheid SA literature was still in its infancy. I want to return to Cape Town and continue this exchange: from what I gleaned, SA is at such a critical and exciting juncture for literature’s growth.