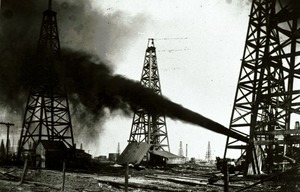 self-portrait with a pair of open scissors

The fracturing of portraiture—
where her face should be: a bladder,
then the long oxidized tract.
In the lower left-hand corner,
the obligatory frisson of landscape:
reliefs of green-tufted asterisks,
a forest of two. Note how the artist
renders the figure simultaneously
septic & aloof. How portraiture captures
both the individual & the age.

& on the third night the gulf was seething like a fire,
& the boats were leaking heavily, & they knew

it was another end. & the way they were put to sea,
forced to leave everything, & the government

cared nothing because it could. & then She saw them,
the Lady of a Thousand Eyes—burn! burn! & simply

the water was made as glass. & She is the way
when there is no way. She weeps each time you’re birthed.

Sweeney on Her Wedding Night

We are the bone that came from him
Thus: husband: master: liege: et law:
The walls like fish in shades of blue

Literally the thing has been gutted, a ragged gash
carved under its tail to midway up its chest, eyes
like stagnant water, horns intricate as a woodwind.
Where did the viscera go? Where do the viscera ever go?
I am in a car driving to the northernmost point
on this spit. Porte de Mort. Death’s Northern Door.
Literally where my grandmother lives. Her 89-year-old cousin
has just fallen out a window but is all right, the bruises

like stained glass. Enthusiasm. To be in God.
My grandmother says it is proof, and I nod my head
because I too would like to live in such a world
where an eighty-nine year old crawls out a window
and falls seven feet to the ground, in turn the miracle
of her body stained a deep blue, vitreous. In one room
of the unfinished mansion where we will celebrate the day,
the ninety-year-old matriarch sleeps in her four-poster bed

under the canopy of a wedding dress, its hundred eyelets
a fallacy. After dinner someone will hand around an indulgence
of the Black Madonna of Częstochowa, the lady’s dark cheek
marred as if she has been scratched. Who at this table
fled the police? Who left that place in flames, the rubble
of infinite hearths? The deer’s eyes like perfect cataracts,
the evidence cooling. When I think of my room in the earth,
I can’t breathe. A friend of a friend recently hit a small bear

with his car. At the end of my favorite novel a bear
is dancing on a makeshift stage, the bear a grotesquerie
like the rest of us. No one stopped to help,
said my friend. Traffic barely slowed. I do not judge this,
or even the surreptitious footage of the workers
somewhere on the killing floor, stomping
the breast-heavy creatures with their rubber boots.
How we raise them not to fly, what should waft

gnostically through the air, the hollowness of evolving.
My heart is doing that thing again, saying climb the stairs
on your knees. I tell a friend a man halfway across the world
has been killed, torn apart by motorbikes, each limb
tied in a different direction. Could a universe be born this way?
One minute you are scraping the silvery bark off a birch
when it comes to you forever and there you lie
in the bed of a blood-smeared truck at a stoplight

on Highway 41 because this is the season of messages.
The man was a teacher. He taught girls.
When they came for him he told his children
not to cry. Then the men took out half his bowel,
the viscera steaming as they do, and they tied him
ingeniously in such a way that they tore him apart.
In that other place three million of us died. When I left,
I left them all behind. In the unfinished mansion

someone will ask me what I’m thankful for.
What to say? That one of the most beautiful things
I have ever seen was a paper nest secreted by wasps,
and that in the summer I would sleep under it,
the runnelled mass turning like a planet in the moonlight?
I will admit I was in favor of war and now look what’s happened.
At the end of the road the man driving the truck will eat
the deer. If I had to watch someone be torn apart by motorbikes

I would still be me, which is the horror of it all.