Join Nina McConigley for a discussion of Murugan’s One Part Woman via Facebook Live on January 31, 2018, as part of Read the Resistance: a PEN America book club. 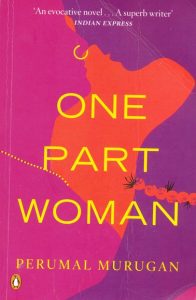 Every year, PEN America asks PEN members, supporters, and staff—writers and editors of all backgrounds and genres—to celebrate the freedom to read by reflecting on the banned books that matter most to them. This is our way of taking part in the American Library Association’s annual Banned Books Week, which brings together the entire book community in shared support of the freedom to seek and to express ideas, even those some consider unorthodox or unpopular.

In January of this year, Perumal Murugan, a Tamil writer living in India, committed literary suicide. He declared on Facebook, “Perumal Murugan the writer is dead. As he is no god, he is not going to resurrect himself. He also has no faith in rebirth. An ordinary teacher, he will live as P. Murugan. Leave him alone.” Murugan has not only stopped writing any new work, he has withdrawn all his books he had written previously from sales, asked publishers not to sell or print his books, called on readers to burn his books, said he would no longer attend any book events, and lastly, requested to be left alone by religious, political, and caste groups. Why? Because the protests for his novel Madhorubhagan or One Part Woman by Hindu and caste-based groups had reached such a fervor, he decided literary death was his only option to live a normal life without harassment and fear.

A year after I finished my MFA, I moved to India to work for a small independent publishing house in Chennai called Tara Books. I knew little of Tara’s catalog, and while I considered myself well-read, most all of the fiction I had read from India was written in English—I had read very few translated works. The first day of work, I was told to just spend the day looking through Tara’s books, and it was there that I first encountered Murugan. I picked a slim volume of his fiction, and sat down outside with a stray dog and cup of tea, and began to read.

The trend in India of writers being harassed and stigmatized for their work is troubling.

Murugan is primarily a teacher, but as a writer has written six novels, four short-story collections, and four collections of poetry—all in Tamil, a Dravidian language mainly spoken by people in Tamil Nadu and Sri Lanka. One of the publishers at Tara, V. Geetha, who is a prominent Tamil scholar and translator, has translated two of Murugan’s books—Seasons of the Palm and Current Show for Tara. That night I took Current Show home with me and read the rest of the book in one night. The book is written in a style that mimics that rapid frame cuts of a movie—there are small short paragraphs on every page. The dialogue is in concise brisk sentences. As a reader, you are drawn into the world of Sathi, a soda-seller in a dilapidated theater. Sathi smokes pot, hangs out with his friends, and lives on the fringes of society. The world on the screen he watches mimicking nothing in his real life.

Murugan is adept at writing about people who are on the margins, who are disenfranchised, and he has written widely about caste. Madhorubhagan, or One Part Woman, was written in 2010, but not translated into English till 2013, which led to the recent trouble. The book follows a childless couple desperate for a baby. As a last attempt, they consider going to a chariot festival at the Hindu temple of Ardhanareeswara, the half-female god, where for one night, it is said that consensual sex between any man and woman is allowed. The book examines caste and societal expectations, while going into the more interior landscape of a couple’s marriage.

Soon after the English edition came out, various caste groups complained that Madhorubhagan insulted a Hindu deity, the temple, and women in general. They called for the book to be not only banned, but destroyed. Many who challenged the text objected to his portrayal of the Kongu Vellala Gounder community, a community that Murugan himself is a part of. The right-wing Hindu nationalist group Rashtriya Swayamsevak Sangh (RSS, or National Volunteers’ Organization) burnt the book and protested vocally against Murugan. Others blamed the Hindu nationalist BJP party led by Prime Minister Narendra Modi for Murugan’s treatment since the book’s release. A bandh or strike was called in Namakkal, where Murugan lives, and under pressure, Murugan tried to meet with protesters, but soon after withdrew from literary life, taking his books with him.

He decided literary death was his only option to live a normal life without harassment and fear.

When Arundhati Roy published The God of Small Things in 1997, she faced obscenity charges in her home state of Kerala. In January 2012, Salman Rushdie did not attend the Jaipur Literature Festival after violent threats. A Dalit writer, Durai Guna, was made to leave his home, while writer Ma Mu Kannan watched as arsonists burnt his library and studio down days after his second novel, Kaana-inaavin Kanini, was released, as villagers objected to the contents. Another Tamil writer, Puliyur Murugesan, was beaten earlier this year after publishing his story collection, Balachandran Endroru Peyar Enakkundu (I Have Another Name, Balachandran) as one story dealt with a transgender protagonist. The trend in India of writers being harassed and stigmatized for their work is troubling. It is imperative that writers from both inside and outside India support these voices, read and buy their books, and make it known that harassment and scare tactics cannot silence writers.

Murugan has kept a low profile since the beginning of the year. He and his wife are both Tamil professors at the Government Arts College in Namakkal. He was living with around-the-clock security as protesters came to his home. But nothing has been heard from him in months.

I was in Chennai in January attending The Hindu Lit for Life Festival, which is one of the biggest literary events in South India, right after Murugan had made his announcement. Right away, the festival responded with a special panel entitled: Free Speech in Peril: The Issues at Stake. It was packed—and the festival adopted a resolution condemning Murugan’s silencing and stressed freedom of expression as a fundamental right, with the Tamil literary community opposing censorship and intimidation in all forms.

But, soon after the festival, I visited my old office at Tara Books. The dog was gone, but over a cup of tea, I asked my bosses if they thought Murugan would write again, as they had been in touch with him. They shook their heads and told me he was too scared. It is not known if there will ever be a resurrection, but I can only hope there is. In the 4th century BC, India ink was created from carbon pigments, and the practice of writing with ink and a sharp-pointed needle was born in South India. To see a pen run dry is not just devastating, it silences the ritual and tradition of the story.