PEN World Voices Festival: A Night of Prayer and Meditation 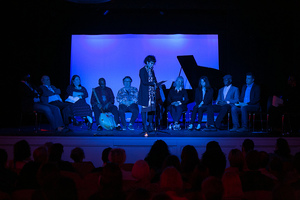 The performers were arranged in a semi-circle, and the audience sat in darkness in the cozy room. Muhly and violinist Yuki Numata intermittently played out into the space. I had entered the event thinking about an AWP panel I’d attended on the Catholic writer Thomas Merton about a month before. “Merton’s capacity to live in place allowed his spirit to roam the world,” Gregory Wolfe had said. An apt sentiment: this event was about being present. The desired effect—of evoking a religious service—was, by my accounting, achieved. As I sat, I felt my pulse slow. The setting, and the task at hand—giving ourselves over to the writers’ words—were as important as the content. We were meant to be there. To be still, which might help our minds be free. Isn’t that exactly where art and spirituality meet?

At the AWP event, Wolfe had described “the beingness of being,” which is “the kind of thing the chanting of songs enables oneself to do.” At “Prayer and Meditation,” I was particularly affected by the meditation Wang led. It was one of Pauline Oliveros’s “Sonic Meditations,” called “Teach Yourself to Fly.” We observed our breathing, which we gradually allowed to become audible; then we introduced our voices, humming with increasing intensity. I was sitting in the balcony, where those around me mostly seemed content to listen to the participants below. But after a few minutes, a fellow began humming softly to my left, and I joined in. It was as moving as any meditation I’ve done; the humming was calming—as though I was singing myself a lullaby—and lent an unusual sense of companionship with the seekers around me. It was just as Wolfe said: we made music together, so we were there, together. Present.

At the close of the event, Edwidge Danticat read “Prayer Before Dying”: what she imagined her mother silently prayed in the moments before she died. Before she read, Danticat shared that, growing up in Haiti and then Brooklyn, her family had prayed twice daily. “Yet it was very hard for me to write a prayer for this evening,” she said. “I think this is in part because I was taught that our prayers are meant to be private.”

The piece Danticat read was an act of mourning and empathy. “Please let me now accept all of this. As I have already accepted this world and all that is and has been,” she read, as her mother.

Please let my children remember me. Both the good and bad of me. Let them not forget one thing about me that could help them be better women and men…Please make my daughter stop crying. Please let it be a sunny day when they bury me. Please let my children find the five hundred dollars I left in the tin can in the freezer—I really should have told them about that when I still could. Please don’t let them throw out my good blender. All it needs is a new blade…Please let them say nice things about me at my funeral. Things I’ve never heard them say before, things I would never imagine them even thinking about me…

We laughed. Danticat cried. We cried, or at least I did. We were with Danticat, and with her mother, through these imaginings. We were with our own mothers, too, and with everyone we’d lost and mourned. Everyone we had yet to mourn. By sitting still and listening deeply, we were able to at once be present and let our minds—our spirits—roam free.