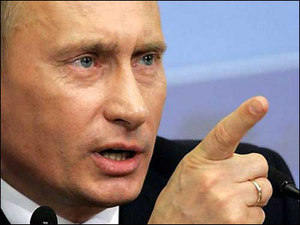 Next week President Obama will travel to St. Petersburg for the annual G-20 summit, and PEN American Center is asking him to use the opportunity to press Russian president Vladimir Putin on the increasingly restrictive climate for freedom of expression in Russia.

In a letter released this week, PEN highlights two especially troubling new laws: a revision to the criminal code that criminalizes “public acts expressing manifest disrespect for society and carried out with the goal of insulting the feelings of religious believers,” which passed despite international condemnation of the arrest and trial of members of the punk performance band Pussy Riot; and the alarming, recently-enacted law which bans “propaganda of nontraditional sexual relations to minors.”

The consequences of this law have been immediate and alarming for many of Russia’s citizens: since the Duma began debating this bill in January, physical attacks and verbal aggression against the LGBT community have been on the rise. But the law also threatens essential freedoms society-wide, especially the fundamental right to freedom of expression. The European Court of Human Rights has stated that such measures to “protect” children from information about homosexuality do not meet the test of necessity in a democratic society and constitute discrimination. Fines imposed on individuals and organizations that discuss homosexuality rise exponentially once mass media and telecommunications, including the Internet, are involved, a plain attempt to discourage public discourse and punish those who attempt to share their opinions. A clear violation of Russia’s freedom of expression obligations under the European Convention on Human Rights and the International Covenant on Civil and Political Rights, the law undermines the rights of all Russia’s citizens and threatens the rights and the work of any American journalist, scholar, or tourist who is working in or visiting the country.

The full text of PEN’s letter is available here.

The G20 gathering occurs against a backdrop of deteriorating U.S.–Russia relations; a planned one-on-one “mini-summit” between Obama and Putin that would have preceded the G20 meeting was scrapped following Russia’s decision to grant temporary asylum to NSA whistleblower Edward Snowden, and wrangling over Syria has only deepened the divisions. So how influential can the United States be in challenging the creeping free expression restrictions in the Russian Federation?

PEN International’s Cathal Sheehan explores that and other questions with four Russian writers on the front lines of the struggle for freedom of expression in a fascinating HuffPo interview this week. In that interview, titled “Edward Snowden, Pussy Riot, and Gays in Putin’s Russia,” Oksana Chelysheva assesses the capacity for outside influences this way:

It is vitally important now to strengthen media connections between Russia and the outside world, and to persuade the chief editors of the media leading outlets to give more attention to Russia: more attention is needed for the growing number of political prisoners. And no matter how unresponsive the Russian authorities might look, or rather, pretend to look, statements on particular cases or individuals do remain an efficient tool that can influence the situation. It is essential to put more pressure on your politicians so that they raise urgent issues during their interaction with their Russian counterparts.

I strongly recommend the interview for anyone concerned about the direction Russia seems to be heading.