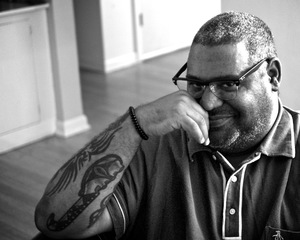 I was lucky enough to figure out that I wanted to be a writer when I was very young. I was ten when I published my first story and sixteen when my first novel was published. So it seems that much of my life, from my adolescence up to now, has been lived as a writer. It is understandably hard for me therefore to separate Chris Abani the person from the writer. Not in the sense of the public personae of the writer, that’s an easy separation to make, but in the private sense of it, in the sense that I sometimes struggle to differentiate between living my life and witnessing myself living my life.

Whose work would you steal without attribution or consequence?

There are so many! God, that is a hard one. I’m always in awe of good writing, even that done by my students. But I think Toni Morrison, Derek Walcott, and Gabriel Garcia Marquez would be three that come to mind immediately.

I would say, in my living room, on the couch, watching TV as I work. I like my creature comforts—certain coffee made a certain way, access to snacks and to the very spicy Nigerian food I make. I need to be listening to music or watching a movie or TV. It stimulates me and gives me something to work off, a need to go deep.

Yes I have been arrested but it’s a complicated narrative not suited for short answers. But I will also admit to shoplifting chocolate once when I was eight. I got caught. Shame.

Obsessions and influences—what are yours?

I have been pretty much obsessed with humans and spiritual quests since I was a child. That’s what the kind of involved Catholicism I lived, as a young person will instill in you. Over time that has evolved into a deep need to understand the entirety of human potential, and the deep urge that gives us language and what it is exactly that we mean for it to articulate about us. I would say that early comic books, Russian novels, movies and most of all, James Baldwin, were influences and in fact remain so.

Will you marry me?

Writers and storytellers as a whole are curators of our common humanity. This is difficult because we curate not just the good, but also the bad, the totality that makes us beautiful. That and surrendering your ego to the story so it finds its way in spite of your limitations.

It is actually contemporary writers that led to the falling out of fashion of the public intellectual. I have many theories about why this is, mainly that we became afraid of the burden of this responsibility. But we do serve a collective purpose; we are the ones who have been charged with the discourse of our common humanity, our shared fragility as beings of reason.

Well we are all observant beings. Much of how we learn is by observing others. Observations intent is usually mimesis or at its worst, understanding. Surveillance is always driven by a more sinister purpose. Therefore there is an abyss between them. Governments or even institutions can never observe because that kind of collective desire is always weighted with nefarious agenda.