On Writing Fearlessly: A PEN Ten Interview with Lilliam Rivera 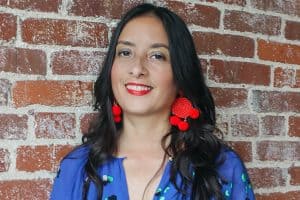 The PEN Ten is PEN America’s weekly interview series. This week, PEN America speaks with Lilliam Rivera, 2013 EV Fellow and author of Dealing in Dreams, published this month by Simon & Schuster. Learn more about this year’s EV cohort and their mentors here.

1. How does your identity shape your writing? Is there such a thing as “the writer’s identity”?
Everything I write comes through the lens of a Puerto Rican, Bronx-native, and Latinx woman. My experiences growing up in the Bronx in the housing projects in the late eighties shape the way I navigate spaces and the way I view the world. It doesn’t matter what I’m writing—contemporary Latinx characters or space aliens from Mars—fiction is my way of exploring these dynamics.

2. In an era of “alternative facts” and “fake news,” how does your writing navigate truth? And what is the relationship between truth and fiction?
This idea of “fake news” didn’t arrive with the current administration. If you follow the colonial history of Puerto Rico where my family originated from you can easily see how “fake news” has and continues to infiltrate the island and people of color. One of the first songs I remember being taught as a kid is a song in Spanish depicting how Christopher Columbus “discovered” Puerto Rico. Innocent lyrics fed to a young mind can be considered fake news. In my latest young adult novel Dealing in Dreams young girls are forced to survive through violence while citywide programs are instituted that look on the onset to be beneficial but are really a way of sedating the masses. Placing my fiction in a futuristic or horror setting is my way of making sense of real horrors.

3. Writers are often influenced by the words of others, building up from the foundations others have laid. Where is the line between inspiration and appropriation?
I think many emerging writers try to emulate their idols. When I first read Junot Díaz’s short story collection Drown I felt seen for the first time. Perhaps my first forays into writing fiction are nods to Díaz or Sandra Cisneros or Octavia Butler’s work until I was able to find my own voice.

4. “Resistance” is a long-employed term that has come to mean anything from resisting tyranny, to resisting societal norms, to resisting negative urges and bad habits, and so much more. It there anything you are resisting right now? Is your writing involved in that act of resistance?
I’m resisting ever having to utter the name of the current president or see his face on any screen. Besides that I’m just trying not to constantly live in anger or fear and to find joy in the littlest of things—in working with young people, in laughing out loud with my friends, and in writing fearlessly.

“Besides that I’m just trying not to constantly live in anger or fear and to find joy in the littlest of things—in working with young people, in laughing out loud with my friends, and in writing fearlessly.”

6. What’s the most daring thing you’ve ever put into words?
The most daring thing I’ve ever put to words have been an essay “On Coming to Terms with My Alcoholism” I wrote for Lenny Letter about being an alcoholic. Although at the time the article was published I had been sober for 15 years, it wasn’t anything I spoke out loud about and only select close friends knew. I was afraid when it went live but also felt a great sense of liberation, of a weight being lifted.

7. Have you ever written something you wish you could take back? What was your course of action?
I don’t want to live in regret so no; I can’t say that I have. What I write at that moment is a snapshot of my age, the times, my current fears, and what I’m trying to work through in my art. I may never be satisfied with what I write but it is what I could have written at that moment.

8. Post, stalk, or shun: What is your relationship to social media as a writer?
Post everything! I know a lot of writers like to shun Twitter or the use of Instagram but I’m not one of those people. I have been on Twitter since 2008 and I still find the platform empowering. I’ve met so many amazing authors and readers.

9. Can you tell us about a piece of writing that has influenced you?
When I was in high school, my English teacher gave me a copy of Anthony Burgess’s A Clockwork Orange. I was in awe of the use of slang and the portrayal of youth and violence. It was an example of what great fiction can do. I knew I would eventually want to write my own version of what it is like to be young and full of rage.

10. In what significant way(s) did being an Emerging Voices Fellow impact your career as a writer?
The fellowship solidified my literary career. I was able to finish a draft of my young adult novel that would eventually be published in 2017 as The Education of Margot Sanchez by Simon & Schuster. The fellowship was the first step in fulfilling my publishing dreams.

Lilliam Rivera is an award-winning writer and author of the young adult novels Dealing in Dreams (Simon & Schuster, 2019) and The Education of Margot Sanchez, available now in bookstores everywhere. Her work has appeared in Elle, Tin House, and The Magazine of Fantasy & Science Fiction, to name a few. Lilliam lives in Los Angeles.