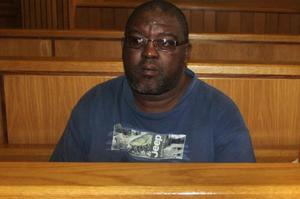 Outrage is mounting at the jailing for two years of Bheki Makhubu, editor of the independent news magazine The Nation, and human rights lawyer Thulani Maseko on the spurious charge of “scandalizing the judiciary.”

Maseko and Makhubu were detained in March and held without bail following a closed court session, in violation of the country’s own constitution. Their trial in the Mbabane High Court was marred by significant procedural irregularities.

Makhubu and Maseko were arrested over the publication of articles in the magazine that criticized the arrest and detention of government vehicle inspector, Bhantshana Gwebu. Gwebu was detained in January after he charged the driver of one of the Supreme Court judges with following an unauthorized route. In sentencing, High Court Justice Mpendulo Simelane argued that the articles amounted to interference with the administration of justice, as the Gwebu case was still before the courts.

PEN South Africa and other media and human rights organizations maintain that Makhubu and Maseko were legitimately practicing their right to free expression by commenting on the conduct of the judiciary and that their comments did not warrant the contempt of court charges brought against them. Many have also suggested Judge Simelane should have been recused because of his personal involvement in the Gwebu case.

In a separate case, Maseko and Makhubu were also convicted for contempt of court on July 17 for additional news articles in The Nation criticizing Chief Justice Ramodibedi. The Nation and its publisher, Independent Publishers, were each fined R50 000 (about US$5,000), and Makhudu was given a suspended three month prison sentence.

PEN South Africa notes that the two-year sentence handed down by the court in the later case has been interpreted by journalists in Swaziland as sending a message to those who seek to criticize the country’s judiciary. The National Director of the Swaziland Chapter of the Media Institute of Southern Africa, Vuyisile Hlatshwayo, says that the judgment “criminalizes freedom of expression in Swaziland,” which is “aptly demonstrated by the scathing tone and language of Judge Simelane.”

“In his judgment, he makes it loud and clear that the objective of the sentence is to silence like-minded journalists thinking of questioning the conduct of judicial officers,” Hlatshwayo said.

PEN South Africa argues that the sentences constitute a massive blow to freedom of expression in Swaziland and will have a chilling impact on the work of journalists in the country.

PEN South Africa supports the move by legal representatives of the two men to appeal the conviction and sentence, and demands that the men be released pending the appeal hearing. The appeal should be held quickly and should succeed if it is conducted in accordance with the Swaziland Constitution, which protects free speech.

PEN South Africa draws the attention of the Swaziland government to the outrage and condemnation expressed by journalists and human rights activists throughout the continent and further afield at the court’s treatment of Makhubu and Maseko. This reaction will influence governments in their attitude towards Swaziland, especially the United States, which is considering removing trade preferences it has granted Swaziland.