The PEN/Saul Bellow Award is given biennially to a living American author whose scale of achievement in fiction, over a sustained career, places him or her in the highest rank of American literature. With a prize of $25,000, the PEN/Saul Bellow is one of PEN America’s most prestigious literary awards and is selected by a panel of esteemed authors, including past winners. Past judges have included Philip Roth, George Saunders, and Zadie Smith. This year’s judges are Louise Erdrich, Adam Johnson, and Porochista Khakpour.

Established in 2009 in memory of Saul Bellow, the award commemorates his love of literature and his contribution to American fiction. The winner of the PEN/Malamud Award in 1989, Saul Bellow won many awards during his lifetime. Of Bellow, Martin Amis wrote, “His sentences seem to weigh more than anyone else’s. He is like a force of nature… He breaks all the rules…[T]he people in Bellow’s fiction are real people, yet the intensity of the gaze that he bathes them in, somehow through the particular, opens up into the universal.”

In keeping with his legacy, recipients of the award  demonstrate a profound impact on the landscape of American fiction. Past recipients of the PEN/Saul Bellow Award for Achievement in American Fiction include Toni Morrison, Louise Erdrich, E.L. Doctorow, Don DeLillo, Cormac McCarthy, and Philip Roth.

From the judge’s citations: “Unsentimental tenderness, sharply observant wit, and an unsparing examination of the self, mark the fiction of this year’s winner of the PEN/Saul Bellow Award for Achievement in American Fiction. The previous winners of this prize have brought to life facets of the American experience. White adds to this accumulated brilliance his early trilogy, an American Epic about coming of age as a gay man in the Midwest, and his later works, often situated in the expatriate’s Paris which has always maintained a rich presence in our national consciousness.”

“To the age of AIDS, the age of loss, the struggle against evangelical Christian hatred, the explosion of gender identities, Edmund White employs a deceptively light touch. He writes about pleasure with amused defiance, and brings questions of moral complexity to bear in relationships with the lost, the troubled, the mortally ill. At the same time, White is life’s great appreciator. His work emanates delight in sensuality, beauty, the intellect, and all that constitutes bliss in this world.”

“Edmund White personifies a cosmopolitan Americanism at home in the world, yet increasingly endangered at home. His great subject is the vexed magnificence of love. His great art is to make that subject belong to everyone. It gives the judges great pleasure to confer the PEN/Saul Bellow Award for Achievement in American Fiction for 2018 upon Edmund White.”

Edmund White is known best for A Boy’s Own Story, The Farewell Symphony, The Beautiful Room Is Empty, and, most recently, Our Young Man. 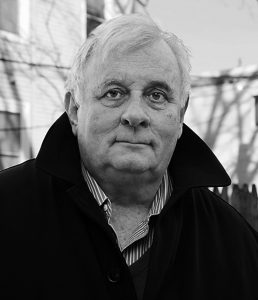