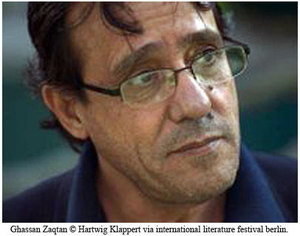 Yesterday, we got word through our Translation Committee that Palestinian poet Ghassan Zaqtan, whose collection Like a Straw Bird It Follows Me is being released by Yale University Press this month, is still waiting for a visa to travel to the U.S. for a planned two-week book tour. The tour was to kick off yesterday with an event featuring Zaqtan and Fady Joudah, his translator, at Claremont McKenna College in California, followed by readings at UCLA today and the San Francisco State University Poetry Center tomorrow.

Worried that the United States might been delaying visa processing for political reasons, PEN joined with the ACLU, our partners in challenging a number of post-9/11 instances of ideological exclusion, to send a letter to U.S. State Department Legal Advisor Harold Koh asking for urgent action on Zaqtan’s visa application. It is our hope that Zaqtan will receive a visa in time to participate in an April 9 event at the University of Houston and subsequent planned events at SUNY Albany, Columbia, Georgetown, Poets House in New York, and Yale University.

Our letter to the State Department follows.

We are writing with an urgent request for information about the status of poet Ghassan Zaqtan’s application for a visa to visit the U.S. to participate in a tour that has been organized in conjunction with the publication this month of his collection Like a Straw Bird It Follows Me by Yale University Press.

Mr. Zaqtan applied for a visa and appeared at the U.S. embassy in Jerusalem for his visa interview on March 7, 2012. We understand that he was told at that time that he would be receiving a visa, and he left his passport at the embassy with the assurance that it would be returned within two weeks, in plenty of time to fly out from Amman as scheduled on April 1. He has not, however, been issued a visa, nor has his passport been returned.

As you can see from the attached visa support letter submitted by Yale University Press, Mr. Zaqtan’s two week tour was to begin today, with an appearance at Claremont McKenna College, and to continue through April 16, 2012, with readings and events scheduled UCLA, University of Houston, Columbia, Georgetown, Yale, and several other venues. Mr. Zaqtan’s international travel has been underwritten by the Poetry Foundation, and costs of the events are being borne in full by the host institutions.

We are also attaching several event announcements from this planned tour, along with a description of his acclaimed new collection of poems. A widely-published and internationally respected poet and writer, Mr. Zaqtan was previously admitted to the United States in 2001, when he was a resident of the International Writing Program at the University of Iowa. He fully complied with the terms of his visa at that time

It is Mr. Zaqtan’s hope, and the hope of his hosts and of the ACLU and PEN American Center as well, that his application can be processed expeditiously, in time for him to participate in the remainder of this important celebration of his work.

We have been grateful for the support of the State Department in ensuring that international writers and scholars are welcome in the United States, and for its commitment, as outlined in a January 13, 2011 letter to our organizations, to give “significant and sympathetic weight” to those seeking to enter the U.S. to fulfill speaking engagements, attend conferences, “or for similar expressive or educational activities.” Because Mr. Zaqtan’s planned book tour, organized in honor of the U.S. publication of his latest collection of poetry, falls so squarely within this area of declared interest, we wanted to make sure you were aware of this troubling delay in visa processing.

As organizations that share this commitment to open cultural exchange and a belief that such exchanges both fulfill the First Amendment right of Americans to engage with their international counterparts and strengthen America’s international standing, we respectfully request that processing of Mr. Zaqtan’s visa application be completed as a matter of urgency, so that he can participate in the remainder of his scheduled tour.

Please feel free to contact Larry Siems at PEN American Center, at 212-334-1660 x 105 and [email protected] if you have any questions or information regarding this situation.

Thank you for your attention to this letter.