The PEN New England Awards are currently on hiatus.

“For as long as there’s been an America, New England has been home to writers. We are the land of John Updike and John Cheever, Sylvia Plath and Ann Sexton, Frederick Douglass and Henry David Thoreau. To say a book is the best by a New England writer is saying a great deal indeed.” —Jennifer Haigh 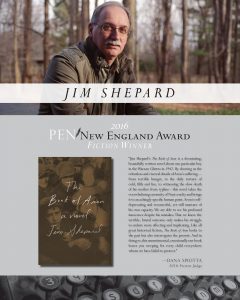 In selecting Jim Shepard’s novel The Book of Aron (Knopf), fiction judge Dana Spiotta wrote: “Like all great historical fiction, The Book of Aron looks to the past but also interrogates the present. And in doing so, this unsentimental, emotionally raw book leaves you weeping for every child everywhere whom we have failed to protect.”

Jim Shepard is the author of six previous novels, including Project X, and four story collections, including You Think That’s Bad. His third collection, Like You’d Understand, Anyway, was a finalist for the National Book Award and won The Story Prize. Project X won the 2005 Library of Congress / Massachusetts Book Award for Fiction, as well as the ALEX Award from the American Library Association. His short fiction has appeared in Harper’s, The Paris Review, The Atlantic Monthly, The New Yorker, and elsewhere, and four of his stories have been chosen for the Best American Short Stories. He teaches at Williams College and in the Warren Wilson MFA program, and lives in Williamstown, Massachusetts. 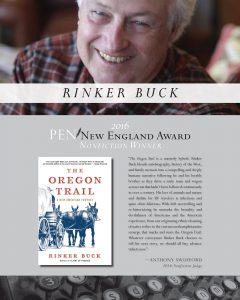 Rinker Buck began his career in journalism at the Berkshire Eagle and was a longtime staff writer for the Hartford Courant. He has written for Vanity Fair, New York, Life, and many other publications, and his stories have won the Eugene S. Pulliam National Journalism Writing Award and the Society of Professional Journalists Sigma Delta Chi Award. He is the author of the acclaimed memoirs Flight of Passage and First Job. He lives in northwest Connecticut. 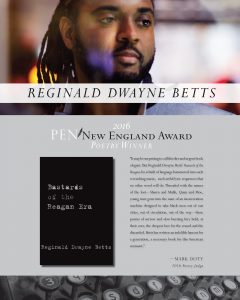 In selecting Reginald Dwayne Betts’s Bastards of the Reagan Era (Four Way Books), poetry judge Mark Doty said: “These poems of sorrow and slow-burning fury hold, at their core, the deepest love for the erased and the discarded. Betts has written an indelible lament for a generation, a necessary book for this American moment.”

Reginald Dwayne Betts’s first poetry collection Shahid Reads His Own Palm won the Beatrice Hawley Award. His memoir, A Question of Freedom: A Memoir of Learning, Survival, and Coming of Age in Prison, received the 2010 NAACP Image Award for nonfiction. Betts was a 2010 Soros Justice Fellow, 2011 Radcliffe Fellow, and 2012 Ruth Lilly and Dorothy Sargent Rosenberg Poetry Fellow. He is currently a Yale Law student.