PEN Eritrea: Defiance in the Face of Extreme Repression 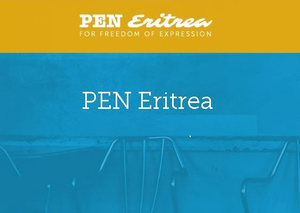 This month we feature PEN Eritrea. We spoke to Abraham Tesfalul Zere, executive director of PEN Eritrea in exile.

What is a project that PEN Eritrea has been working on in recent months?
PEN Eritrea is at its nascent stage and was launched in February 2015. So far, it is being run with the resources provided by widely scattered, exiled Eritrean writers and journalists who are trying to share the current Eritrean predicament. Hence, it is mainly engaging in promoting the cases of the journalists who have been kept in incommunicado detention for more than 14 years. Our center is trying to highlight their works and trying to document their contributions. In collaboration with The Guardian, our center has profiled six journalists who have been incarcerated for more than 14 years. A bigger section of our website is devoted to paying tributes to and sharing the works of those journalists. In collaboration with other PEN centers and mainly PEN International, we have been issuing resolutions. Due to a lack of information coming out of Eritrea, most of the journalists’ stories and plights have been reduced to mere names and numbers. Now we are trying to provide a bigger picture and share the plight of Eritrean journalists and artists who have been subjected to pervasive censorship, harassment, and mass arrests.

What are the key free expression challenges facing Eritrea?
“Challenges” is an understatement. Eritrea is a police state and the most censored country in the world, as The Committee to Protect Journalists reports. The collective surveillance, lack of independent media, and extreme censorship have turned the country into a grim state. In Eritrea, in addition to the known history of banning private newspapers and the unparalleled action of keeping editors detained incommunicado and in the harshest conditions in jail, state journalists face routine arrests and intimidation. The arts and journalism communities operate under severe conditions in an atmosphere of mounting fear. The educational Radio Bana, run by the Ministry of Education, was raided in February 2009 and about 50 of its staff members were taken into custody. Without any charges, most of the journalists and staff members were released after four years. Six more journalists and staff members were released after six years. None of them were charged or brought to a court for trial.

Eritreans living inside the country are subjected to constant official propaganda. All of the state media and other forms of expression reiterate the same narrative. The narrative delivered consists of either hate-filled speeches against other countries, mainly those in the West, or delusional accounts trying to portray the country in a state of progression.

Independent artists do not have means of sharing their works. Most artists are army conscripts and report to their respective divisions or have to have their art approved by the Cultural Affairs Office of the ruling party. Naturally, because of this structure, a work of art that goes through the stringent filters of monitoring agents is expected to be propaganda. Even the least talented artists can’t produce and share their works. The censorship unit of the Ministry of Information requires prior approval of all works to be published, recorded, and distributed. The tedious and lengthy process efficiently discourages talented artists, and leaves mediocre pseudo-artists who can stand the long waiting period of more than two years for a film and about the same time for a book to publish their works.

It is really a sad state. What makes it worse is to see some of the key actors who have been working to institutionalize terror and pervasive control, like Ali Abdu, flee the regime and ask for political asylum in countries like Australia. He is greatly believed to have masterminded the raid and ban of the educational Radio Bana, and he is responsible for introducing the worst censorship practices, still in place today, during his 10-year tenure as Minister of Information. However, the lack of Eritrean independent civil societies enables such people to live in peace, unencumbered after effectively demolishing institutions.

Would you share with us a sense of the literary traditions in Eritrea?
Eritrea has a rich literary tradition, both in poetry, and recently, in prose. As most writers write in local languages, the outreach of their literature has been limited. For example, after the first novel in Eritrea was translated into English, under the English title The Conscript, it received wider acclaim and readership. As the scholar Laura Chrisman puts it in her introduction to the book, it also redefined the canonical works of anti-colonial literature. The novel, written by Gebreyesus Hailu, is now being translated into English by Ghirmai Negash and was first written in 1927 and published in 1950.

Generally, there are very good works that still remain unexplored mainly because of the language barrier.

Can you update us on something new in the literary world of Eritrea today?
The inescapable censorship and control of the arts by the state has silenced talented writers and artists. Those who remain in the country have three options: be coerced into being accomplices of the regime; lay low in the country if they can stand the degrading atmosphere of mounting fear; or abscond either when sent to attend events outside of the country (the few lucky ones), or flee across the most tightly secured borders guarded by an army that follows a “shoot-to-kill” policy.

Interestingly, social media and the new virtual space are being used as a means of fighting back against repression through writing online and providing a platform for connecting exiled writers and artists. PEN Eritrea is an example of this outreach through the new space for communication online.

Who is a writer from Eritrea that we might not know about? Would you introduce us?
Among many other talented and yet unnoticed writers, I can mention Amanuel Asrat. He was the editor-in-chief of Zemen newspaper and has now been in custody for the last 14 years. He is credited with insitgating the resurgence of Eritrean poetry during the early 2000s. He is an award-winning poet and critic who helped found grassroots literary clubs across the country. Mainly due to our center’s advocacy on his behalf, he has now started to get the attention he deserves. His poem was translated into 14 languages to mark International Translation Day; he held one of the empty chairs at the 81st PEN Congress in Quebec, Canada; he was one of the cases highlighted during PEN International’s Day of the Imprisoned Writers, an international day that recognizes writers who have suffered persecution as a result of exercising their right to freedom of expression; and on January 14, 2016, he received (in absentia) the Oxfam Novib/PEN International Free Expression Award at the Writers Unlimited Winter Nights Festival at The Hague, along with Turkish journalist and filmmaker Can Dündar and Egyptian writer Omar Hazek.