PEN DIY: Bob Morris on How to Deal with Regret 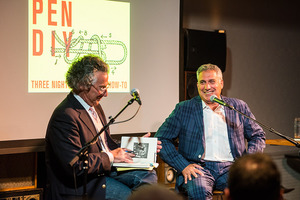 Bob Morris took to the stage at the Ace Hotel to launch his new memoir, Bobby Wonderful, an “introspective, yet humorous look at the final journeys of his critically ill parents” in our final DIY presentation of the season. His talk explored the shape and sensation of guilt, grief, and regret. Morris quoted Arthur Miller as he began his talk, who said “Die with the right regrets.”

In his poignant and funny five-step lecture, titled “How to Deal with Regret,” Morris walked the audience through the moment you do something regrettable to the moment you move on through writing about it.

Step One: Do Something Regrettable

Regret, Morris says, is an “existential wake-up call that points you in the right direction.”

From his own life, Morris shared regretting the time he hit his father on the arm with a tennis racket in front of an audience, the time he threw away his parents’ recliner without telling them because he thought it was tacky, and the time his father once offered to purchase him a space in the family graveyard plot, which he refused outright.

Whatever you do, Morris advises, “make sure the thing you do is something that will come back to haunt you.”

Once you’ve done your regrettable thing, rationalize the reason you did so. The recliner in Morris’s parents’ living room was getting so rickety it was dangerous, and had to be removed. He’d prefer to be in a cemetery that is easier for his city friends to get to, and not in the family plot.

You didn’t do anything wrong, if you really think about it.

Step Three: Have Second Thoughts, Then Ruminate and Obsess

Step three involves over-thinking your actions, considering what you did and why you did it, and wondering why you’ve acted so selfishly: “He offered me a grave with him and my mother so we can be together and I turn him down? Why can’t I say yes for once? […] They look so bereft without their recliner. I wonder if I can get the chair back?”

Step Four: Try to Resolve It

Ask for forgiveness, and do your best to compromise: “It’s a nice offer, a plot for me, it’s just not my scene. I hope you’ll understand. There’s a lot of traffic noise and I’m a light sleeper.”

Step Five: Fail to Move On and Resolve It or Write About It. Or Both.

It’s not that you’ll end up in a state where you regret nothing. Instead, you’ll arrive at a place where you regret things less. Morris still regrets many things about his relationship with his father, but he has found that he can look beyond that regret.

“And really,” Morris concluded, “how perfect can any of us be? Regrets are like breaths, necessary to know you’ve lived.”