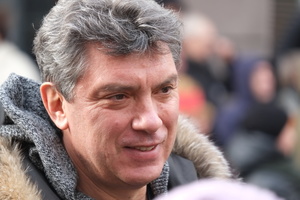 PEN American Center expressed shock and outrage at the premeditated murder of Russian opposition leader and former Deputy Prime Minister Boris Nemtsov on the eve of a march Nemtsov was organizing to protest the war in Ukraine.

Nemtsov, a politician and former government official, is the author of several books and numerous articles and reports about contemporary Russian politics, including his 1997 memoir, A Political Man, a frank and freewheeling account of his time as governor of Nizhny Novgorod. The killing of Nemtsov sends a blood-chilling message to the Russian people about the costs and dangers of political dissent, compounding a climate of fear and repression created by the murder of numerous journalists and a series of draconian laws that target free expression and civic organization.

“Nemtsov’s late-night assassination in the heart of Moscow is a shot heard round the world, reminding us of the mortal dangers facing those who exercise the right to speak and protest in today’s Russia. When a prominent political dissenter is killed in cold blood, the clear aim is to strike fear in the minds of all those who would dare express opposing views,” said Suzanne Nossel, executive director of PEN American Center.

Because of Nemtsov’s status as an outspoken critic of the Putin government, PEN American Center calls for an independent international inquiry into his murder.