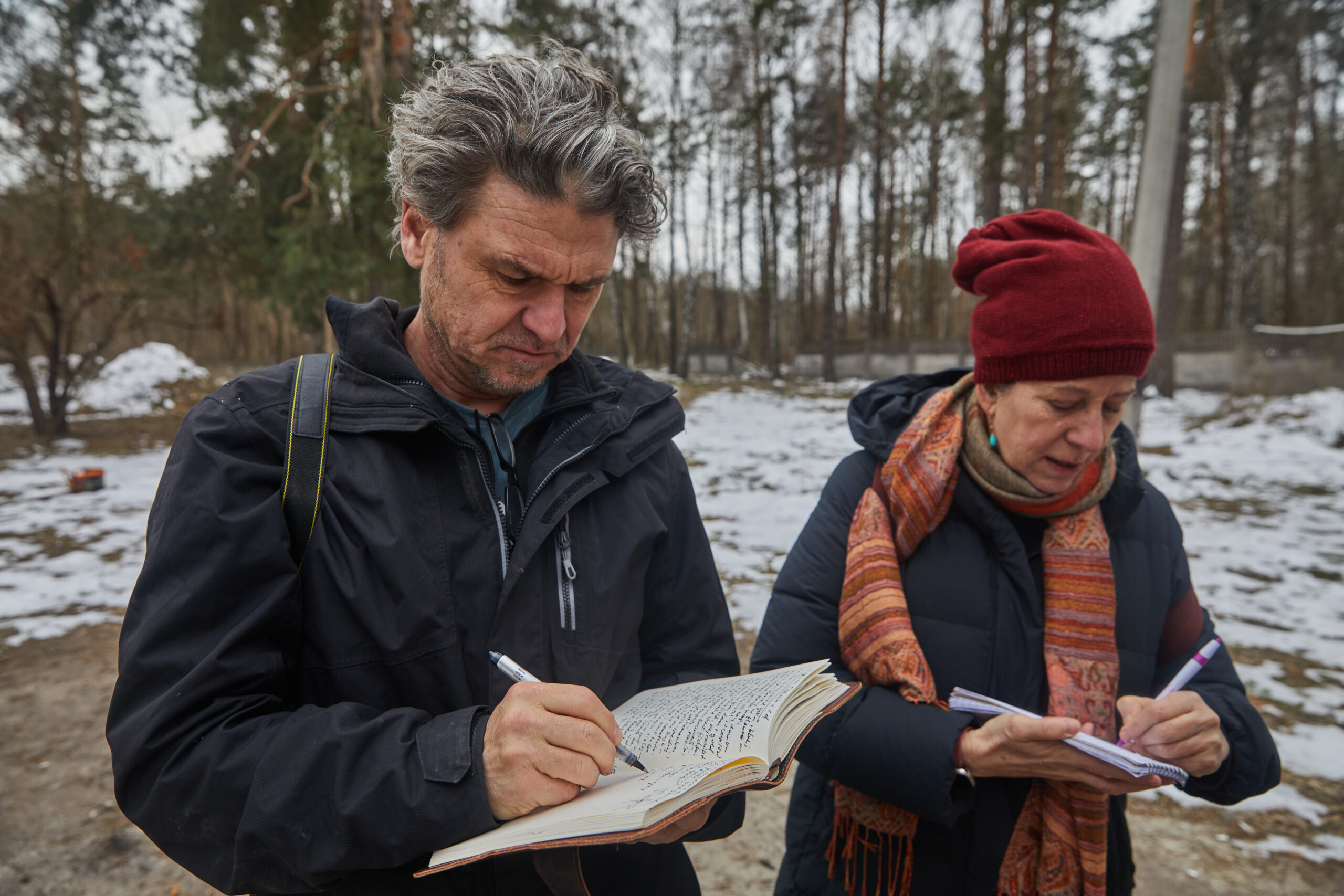 A delegation from PEN America traveled to Kyiv in early December to bear witness to the war’s impact as they released a new joint report with PEN Ukraine, Ukrainian Culture Under Attack: Erasure of Ukrainian Culture in Russia’s War Against Ukraine.

The visiting delegation included prominent American writers — Barbara Demick, Dave Eggers, and Peter Godwin – standing in solidarity with Ukrainian writers and artists. They witnessed devastation and deprivation all around them, but also the resilience of the Ukrainian artists and writers who will not allow their culture and heritage to be erased. 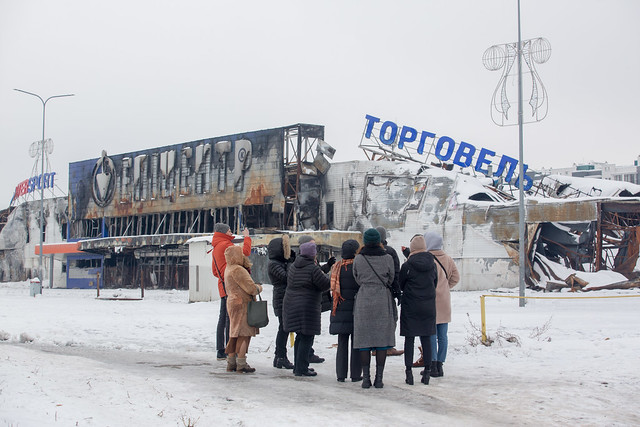 The delegation met with writers, journalists, and diplomats to advance PEN’s advocacy, and traveled with PEN Ukraine to points where libraries, museums, and other cultural sites had been destroyed. Here, they recount what moved them most. 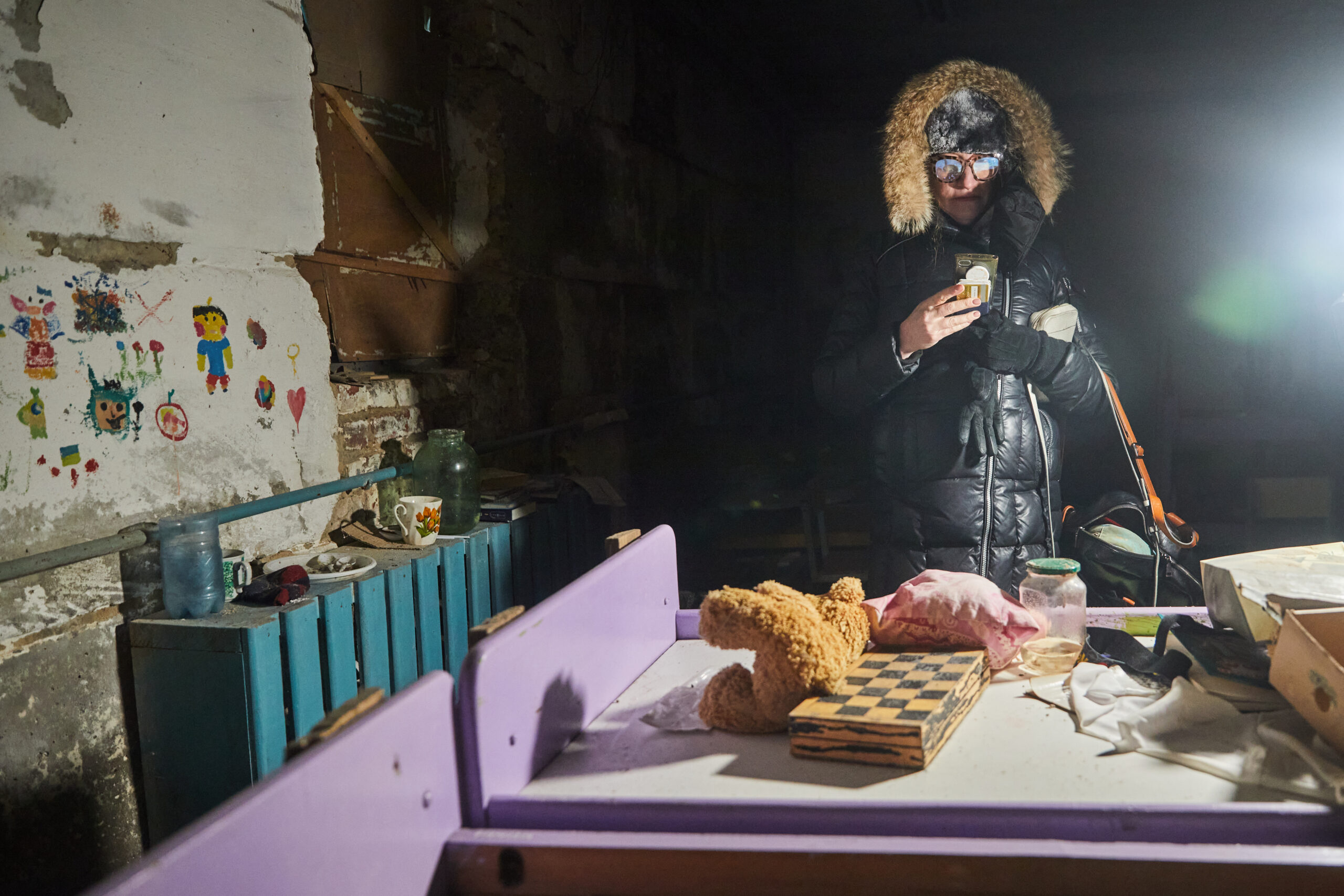 Suzanne Nossel documenting items left behind by some of the 50 children held captive as human shields, along with 250 adults in a cramped, windowless basement of a school in Yahidne. (Photo: Oleksiy Karpovych)

Traveling to Kyiv just as winter set in, amid blackouts and missile attacks aimed to plunge the country into frozen darkness, offered a stark, unforgettable window into the profound vulnerability of Ukraine’s people and culture, but also their incandescence.  We enjoyed cozy dinners with writers and cultural figures and witnessed the fierce determination of Kyiv’s creative community to continue to mount exhibitions and concerts, come what may.  We also visited sites of wanton destruction, torture, and depravity, still marked with the poignant, personal human relics of lives freshly destroyed: soiled children’s toys, ruined books, abandoned games and colorful pictures painted on cellar walls as people endured weeks held captive underground as human shields under the boots of Russian occupiers.  The juxtaposition of barbarity and vitality was a startling testament to the inextinguishable lifeblood of Ukraine’s national identity, determination, and pride.  It was an honor to stand in solidarity and to bear witness to the bravery of Ukraine’s writers and citizens as they endure and resist. 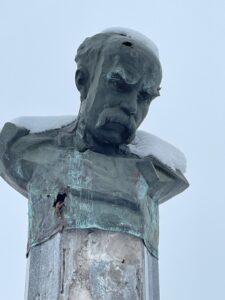 At the central square of Borodianka, the statute of national poet Taras Shevchenko, twice shot through the head. (Photo: Dru Menaker)

Coming to Ukraine forces a struggle to imagine what Ukrainians see now when they look into the forest from where Russian soldiers emerged to take their village captive, pass by the shell-gutted hulk of the Comfort Life apartments, or open their eyes in the cold, dark night waiting for the next second to bring the siren signaling an air raid. Life here was once just life; now the once unimaginable is life. And yet, at the bombed-out Bucha house of culture, a Ukraine-yellow rose that might have been presented to a pianist decorates a bullet hole. In a bomb shelter at Kyiv’s humanities university, writers consider how the Ukrainian story should be told.  At the central square of Borodianka, the statute of national poet Taras Shevchenko, twice shot through the head, stands as a new kind of monument. In a café, the pastry chef has formed chocolate pastry into the crisscross of a tank trap. At a Kyiv fashion designer’s boutique, the window proclaims “Bravery is Ukrainian Brand.’’ For a visitor, it is striking to witness the ways, amid the ongoing terror and destruction, that Ukrainians are sustaining their resilience with creativity, commemoration, and culture.

On behalf of PEN Ukraine and our team, I would like to thank PEN America for these eventful and busy days spent together in Ukraine. At times, when doing your job under the conditions of new daily challenges, you may feel exhausted and powerless to change anything. It is of greatest importance on such days to see that you are understood, and your endeavors make good sense. This is what gives you strength to go on working and fighting. I thank you for more than four years of partnership that helped PEN Ukraine to develop from a volunteering organization into an influential and strong institution. 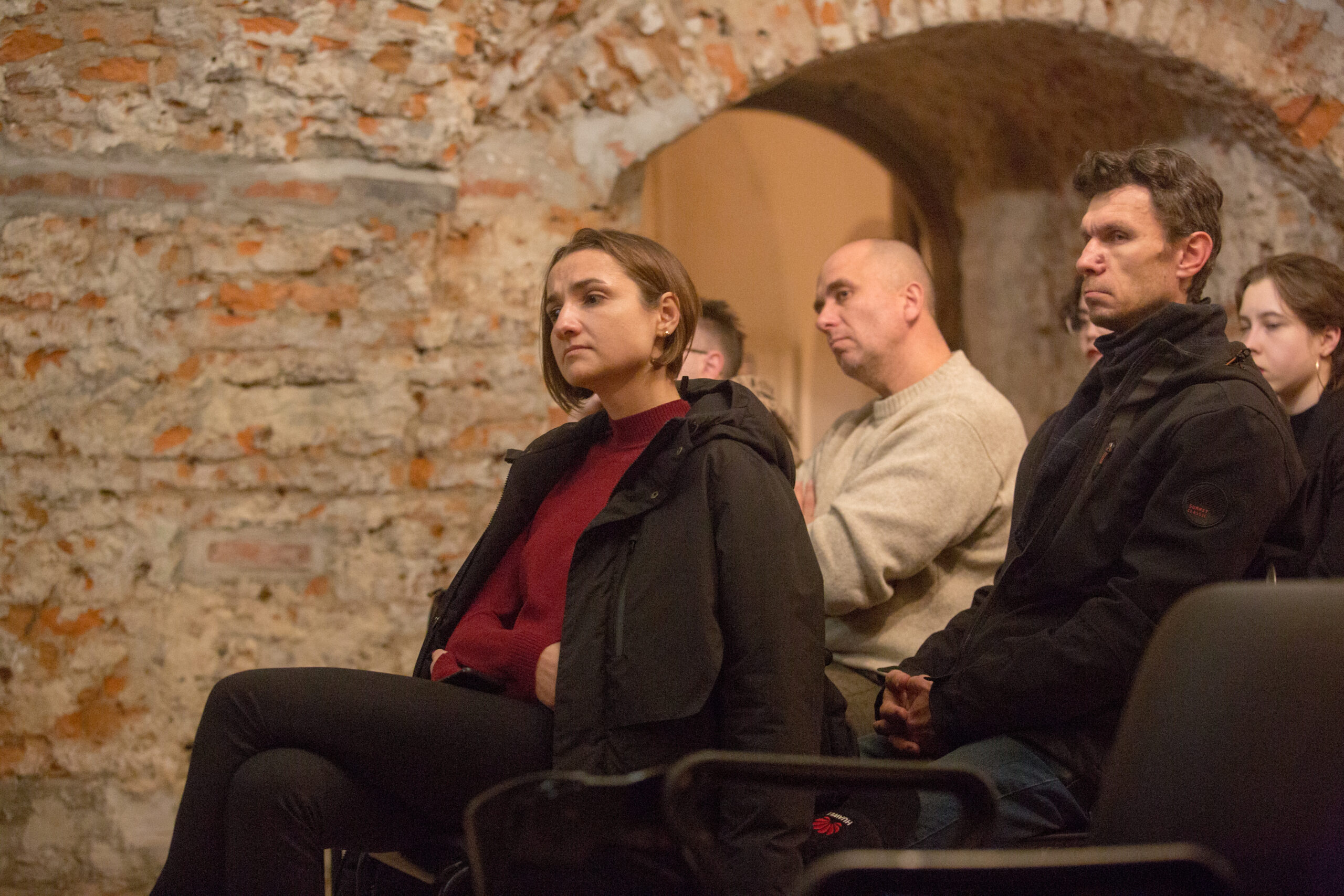 Tetyana Teren of PEN Ukraine attends a meeting of writers in held in a university cellar in Kyiv. (Photo by Oleksiy Karpovych)

The cruel targeting of Ukraine’s writers and artists, its cultural infrastructure and heritage is yet another tactic by the Russian Federation to make life unbearable for ordinary Ukrainians and part of its extensive targeting of civilians in its brutal war against Ukraine. Our report will be part of the record, providing evidence of a litany of war crimes and human rights abuses and contributing to efforts to hold war criminals accountable for their effort to erase Ukraine’s culture. It is also a testament to the toughness and courage of Ukraine’s cultural producers and their struggle for their human rights, freedom and dignity.