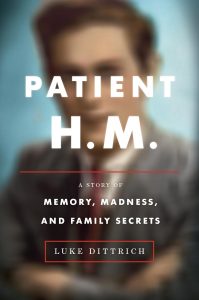 Luke Dittrich’s Patient H.M.: A Story of Memory, Madness, and Family Secrets is the winner of the 2017 PEN/E. O. Wilson Literary Science Writing Award. The following is an excerpt from the book.

The laboratory at night, the lights down low. An iMac streams a Pat Metheny version of an Ennio Morricone tune while Dr. Jacopo Annese, sitting in front of his ventilated biosafety cabinet, a small paintbrush in his hand, teases apart a crumpled slice of brain. The slice floats in saline solution in a shallow black plastic tray, looking exactly like a piece of ginger at a good sushi restaurant, one where they don’t dye the ginger but leave it pale. Annese takes his brush and, with practiced dabs and tugs, gently unfurls it. The slice becomes a silhouette, recognizable for what it is, what organ it comes from, even if you are not, as Annese is, a neuroanatomist.

He loves quiet nights like these, when his lab assistants set him up with everything he needs—the numbered specimen containers, the paintbrushes, the empty glass slides—and then leave him alone with his music and his work.

Annese coaxes the slice into position on the slide that lies half submerged in the tray, cocking his head, peering at it from different angles, checking to see that he has the orientation right. When you’re looking directly at the slide, the left hemisphere must be on the right side of your field of view, just as it would be if you were you staring into the eyes of the brain’s owner. Although brains are roughly symmetrical, they are not entirely so, and Annese has become familiar with the topography of this one, all its subtly asymmetrical sulci. At the very center of this slice, in an area that would normally contain a buttressing framework of neural tissue, there are instead two gaping holes, one in each hemisphere. Annese takes extra care not to tear the edges of the holes or distort them, dabbing painstakingly at their frayed perimeters with the tip of his brush. The holes are historic, precious in their own way. Annese does not want to become famous as the second doctor to desecrate this particular brain.

A few more prods and Annese begins to pull the glass out of the tray. Before he trained as a scientist, he worked as a cook, and he often uses cooking analogies to explain his techniques. The art of histology is a lot like baking, he says, since in both everything must be finely calibrated, with little room for improvisation. Soon the slide, with its burden perfectly positioned, is resting safely on the tepid surface of a warmer, where it will be left to dry overnight.

Annese reaches for another cryogenic vial, number 451, screws off the lid. Just before he tips the next slice into the tray, he turns to me and smiles.

“See how much work I have to do to clean up the mess your grandfather made?” he says.

There were things Henry loved to do. He loved to pet the animals. Bickford Health Care Center was one of the first Eden Alternative facilities in Connecticut, which meant that along with its forty-eight or so patients, the center housed three cats, four or five birds, a bunch of fish, a rabbit, and a dog named Sadie. Henry would spend hours sitting in his wheelchair in the courtyard with the rabbit on his lap and Sadie by his side.

He loved to watch the trains go by. His room, 133, was on the far side of the center, and from his window, several times a day, he could watch the Amtrak rumble past the abandoned redbrick husk of the old paper mill across the street.

He loved word games. He’d sit for hours and hours and work through books full of them. Many of the scientific papers that have been written about Henry over the past six decades describe his avidity for crossword puzzles, though in his later years he found them too great a challenge and started doing simple find-a-word puzzles instead.

He loved old movies. Bogart and Bacall, that era. The African Queen. Gone with the Wind. North by Northwest. We call them classics, though of course they were not classics to him. He’d ask to see one of these movies, and a nurse or attendant would pop in a videocassette. Television sets were no shock to him, TV being a technology that developed during his time. But he never did figure out how to operate a remote control. He loved talking to people. He’d tell them stories. He told the same stories, over and over, but he always told them with equal enthusiasm. When people asked him if he remembered meeting them before, he’d often tell them that yes, he thought they’d once been friends. Hadn’t they gone to high school together? Even when his uncertainty about these sorts of things frustrated him, he usually remained courteous and cheerful. Compliant, too. When the scientists would come to pick him up and take him to the laboratory, he never objected. And he almost always took his meds when the nurses asked him to. On the rare occasions that he refused, the nurses knew of an easy way to get him to cooperate. It was a trick passed down over decades, from one nurse to another.

“Henry,” a nurse would say, “Dr. Scoville insists that you take your meds right now!”Invariably he would comply.

This strategy worked right up to the end, until Henry died. The fact that Scoville had died decades before then, and that they’d had no contact for decades before that, made no difference. Scoville remained an authority figure in Henry’s life because Henry’s life never progressed beyond the day in 1953 when Dr. William Beecher Scoville, my grandfather, removed some small but important pieces of Henry’s brain.

I remember following my grandfather up a snowy hill during his last winter. I think he was wearing a light blue parka, and in my mind the parka is worn and threadbare, though that would have been uncharacteristic of him. This is a man who was once described by a New York Times reporter as “almost unreal in his dashing appearance.” But there it is in my memory: a threadbare blue parka. Maybe he even had a woolen cap, one with a pom-pom top, pulled down over his pomaded hair. He always combed his hair with olive oil, that’s what my mom says.

We were going sledding.

I remember snow, a white sky, some trees. Cold. Tramping up the hill together.

He was dragging an old-fashioned wooden toboggan behind him, big enough for the two of us. When he reached the top of the hill, he stopped, looked back toward me, and waited. Why do I remember any of this?

I remember because when the cascade of impressions from my eyes, ears, and skin bombarded me with sights and sounds and textures, with leafless trees and my grandfather’s hat and the crunch of our boots in the fresh snow, those impressions were channeled to some small but important parts of my ten-year- old brain. Then my brain went to work, processing raw sensation into something else: a memory, one that still resides inside me, three decades later, to be called up on occasion and dragged, blinking and uncertain, into the light.

I’m getting ahead of myself.

Memories make us. Everything we are is everything we were. This has always been true and is so obvious that it hardly needs to be said. But though memories make us, we’ve only recently begun to understand how we make memories. The story of how we’ve gained this understanding is the story I’m telling in this book. It’s a story with heroes and villains, tragedy and romance, violence and tenderness. My grandfather plays a part, but it’s much bigger than my grandfather.

It’s a story about science, and about nature, human and otherwise. And it begins, like a lot of stories do, with a fall.

This is an excerpt from Patient H.M.: A Story of Memory, Madness, and Family Secrets, published by Penguin Random House in 2016.