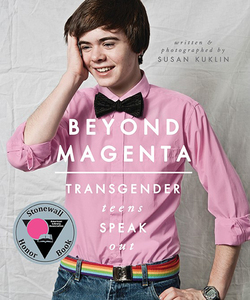 I did not set out to write a definitive transgender book. I wrote and photographed six individuals, ages 16 to 22, who fall under the transgender umbrella. This left me wondering, why were six kids challenged for expressing who they are? How can one make sense of this?

In the days that followed, as friends and colleagues congratulated me for “making the list,” I worried what it would mean to Jessy, Christina, Mariah, Cameron, Nat, and Luke, people I had come to love and respect. Magenta was written in the first person as a way to bring the individual’s identity candidly to readers. The idea behind writing in such a way is similar to that of most of my books: once we get to know individuals well who may be different from ourselves, it is less likely we will be wary of them. We will see the overriding number of similarities with them. Simple. Simple? Guess not. Instead of being “less wary” about the contributors, they challenged them.

Interviews for the book took place over a long period of time. I marveled at the subjects’ compelling power to take control of their identity. Memories, details, and insights followed the book right into production. Take Christina, a transgender young woman going to an all-boy Catholic high school in the Bronx. By her senior year Christina, then known as Matthew, refused to dress male. She refused to be anyone other than her true self. Like the five other young people, Christina gave up anonymity for identity.

That first day I walked outside, people just stared at me. I loved the attention. I didn’t think I looked like a girl yet, but there was something about people acknowledging me, wondering what I was, that made me happy.

And now, cloaked under such reasoning as “offensive language,” Christina, along with the other five, is challenged once again.

Could it be that the six kids were challenged because they posed some kind of threat to the contestant’s own identity? Perhaps by showing the commonalities that trans and cis people share, it becomes easier to come out? Does this make sense? To minimize the risk to our own orthodoxy, it’s best to not reveal the fact that we have many commonalties; best not to humanize the iconoclast? To counter the message, must we shun and demean the messenger?

The American Library Association’s Office for Intellectual Freedom Director, Jamie LaRue, who helped compile the list, said in an interview on CBS This Morning, “I think it’s the outsider. You know, it’s whatever part of our society that mainstream Americans still feel some discomfort with.” This seems inconsistent with the ideal that America is a melting pot. Why are some parts of the pot allowed to melt while others are not?

In the case of contemporary nonfiction, of Magenta, the naysayers are not only banning a book, they are banning real people, young people. And although I told the participants again and again that they could be subjected to nasty, hurtful comments, they chose to express their identity over maintaining privacy. The power and gratification of revealing one’s own self overpowered the fear of vengeance.

When the doctors confirmed that I was intersex, I thought WOW, I’m that whole other gender! It proved what I had been feeling all along. I was not only emotionally, psychologically, and spiritually both sexes; I was physically both sexes too. This is who I am.

Comments such as Nate’s This is who I am, have encouraged others. Among other expressed concerns, many young people email me, or come up after a talk, to say that they didn’t know how to tell their conservative parents that they are transgender, and that the six young folks showed them that they could speak out too. Some wrote on social media the pride they felt when they saw a person like themself on the cover of a book prominently displayed in a bookstore or library.

By not allowing a certain population, which has no power or desire to hurt others, to define itself on its own terms, we do a real disservice to truth. We deny people the basic human impulse, one that we all have, to define their public persona. That’s not right.

Susan Kuklin is an award-winning author and photographer of more than thirty books for children and young adults that span social issues and culture. Her books include, Beyond Magenta: Transgender Teens Speak Out, No Choirboy: Murder, Violence, and Teenagers on Death Row, Beautiful Ballerina, and many more. Her photographs have appeared in Time, Newsweek, and the New York Times.