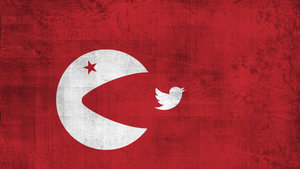 In the latest onslaught on free expression, the government of Turkey made international headlines this month when it again went head-to-head with internet sites Twitter, YouTube, Facebook, and Google over the issue of censorship. The contestation began when the government instituted a ban on press coverage of the kidnapping of Turkish prosecutor Mehmet Selim Kiraz. In particular, the Turkish government sought to censor images and video of one of the kidnappers holding a gun to Kiraz’s head just before the prosecutor was killed as a result of failed negotiations.

In what can only be seen as an effort to avert visual depictions of its own failure in the hostage situation, the government invoked its repressive new internet laws to shut down Twitter and YouTube until the sites complied with Turkey’s demand to pull the images or shut down the accounts of those that posted the pictures. Additionally, the government threatened Google and Facebook with a shutdown if they did not comply.  It also banned any media outlets that published the photos from attending the prosecutor’s funeral, accusing them of supporting terrorism.

Sadly, this type of scenario has become all too familiar under the Erdogan regime. Human rights organizations have been speaking out about the attacks on free expression in Turkey since 2012. According to Freedom House’s Freedom of the Press report, Turkey’s protections for press freedom have been on a slow decline since around 2009, culminating in a precipitous drop in 2014 that repositioned it into the Not Free category. The Committee to Protect Journalists places Turkey in the list of the top 10 biggest jailers of journalists around the world with countries like China, Syria, Egypt, and Vietnam. The regime seems determined to keep a tight rein on public opinion by quashing the voices of its detractors.

Over the past several years, the government has regularly targeted journalists for criminal prosecution by utilizing anti-terror laws as well as troubling provisions in its penal code. In an alarming illustration of this point, a Turkish journalist association recently released a report  on the first quarter of 2015 noting that between January and March, 13 journalists faced investigations. This crackdown has not only decimated independent reporting but has resulted in an increase in self-censorship among those in the media who hope to avoid the same fate.

Meanwhile, internet and social media platforms have been waging their own battle, mostly unsuccessfully, against the Erdogan government. Leaked documents from Turkey’s National Security Council (NSC) denote social media as one of the greatest threats to domestic security.

According to Twitter’s 2014 Transparency report, Turkey played the largest role in a worldwide 84% increase in content takedown requests. Turkish requests alone increased by 156% during the second half of last year: Twitter received 477 requests, either in the form of a court order or a directive from a government agency, from Turkey. In more than 70% of these cases, Twitter filed formal objections with Turkish courts on the basis that Turkey restricted free expression but was mostly unsuccessful, succeeding in challenging Turkish orders in only about 5% of cases. In the past few years, Twitter and other social media platforms have learned several times that when they refuse to take down material, the Turkish government simply blocks or bans access to their sites. This often occurs concurrently with important political moments such as elections and anti-government protests.

Despite the way the government throws around the word ‘terrorism’ in its efforts to stymie free speech, ISIS recruiting sites and other sites that support terrorist activities and jihad are freely operating in Turkey while the government spends its time pursuing censorship of ordinary citizens and journalists that dare to criticize the Erdogan government and religion. Tens of thousands of websites have been blocked over the past few years by the Turkish government under the draconian Internet Law 5651, with reported numbers ranging from 15,000 to more than 67,000 websites blocked. Among those websites blocked are the websites of the country’s first atheism association, the French magazine Charlie Hebdo, and the independent news provider T24, which aired the terrorist attack on the Charlie Hebdo office. Turkish citizens have become so accustomed to government-mandated blocking of websites and social media sites that many have begun to use circumvention technology to be able to continue accessing them. This is not, however, a long-term solution. In order to reverse the trend of burgeoning internet censorship in Turkey, internet and website companies must be willing to stand by their principles on censorship and free speech, even when it means losing revenue. Additionally, internet and website companies must work in solidarity with human rights groups and the business community to maintain pressure on Turkish authorities, release imprisoned writers, end official harassment of journalists, revise laws and policies to protect the media’s rights to report freely, and clear the path for social media to be an avenue of free expression.