On William Faulkner’s As I Lay Dying 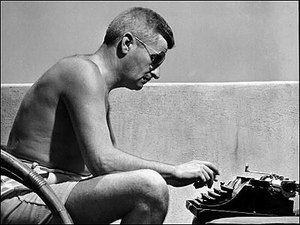 And so it was because I could not help it. It was then, and then I saw Darl and he knew. He said he knew without the words like he told me that ma is going to die without words, and I knew he knew because if he had said he knew with the words I would not have believed that he had been there and saw us. But he said he did know and I said “Are you going to tell pa are you going to kill him?” without the words. And that’s why I can talk to him with knowing with hating because he knows.

—Dewey Dell, from As I Lay Dying

Books are continually banned around the world, mainly for political reasons, even if the “politics” are oblique or cosmetic. During the apartheid years in South Africa, the young adult classic Black Beauty was banned simply for the combination of “black” and “beauty.” When there still was an East Germany, an East German friend of mine told me that he was given one of ten extant copies of a banned novel. My friend is a prominent physicist, and so was given the courtesy of being able to finish the offending “bourgeoisie” novel before the secret police politely took it from him.

In the US, book bans in conservative areas are cropping up with alarming frequency, most egregiously in Arizona, where State Stature A.R.S. § 15-112 prohibits courses and classes that “promote the overthrow of the United States government, promote resentment toward a race or class of people, are designed primarily for pupils of a particular ethnic group or advocate ethnic solidarity instead of the treatment of pupils as individuals.” So what books did they ban as a result? “The Tempest” for one. Yes, Shakespeare’s play is banned in Arizona. Yes, I am embarrassed to travel abroad.

While ideological book banning is infuriating, banning out of ignorance and vague religiosity are, to me, even more galling. William Faulkner’s classic, As I Lay Dying, has been banned by several US school districts. One Kentucky district removed it from the curriculum for obscenity, using God’s name in vain, and the mentions of abortion and reincarnation. These conclusions were reached even though every member of the school board admitted that he or she hadn’t actually read the book. Another Kentucky school board tried to ban it because of “profanity and a segment about masturbation.” While a third Kentucky board pulled it due to profanity and questioning the existence of God. In Maryland, a school board tried to pull it due to “coarse language and dialect.”

“Coarse language and dialect” is exactly Faulkner’s project. By banning As I Lay Dying, you are banning a sensibility and worldview, one that is as complex and vast as Faulkner’s fictional Yoknapatawpha County. Faulkner, a Mississippi high school dropout, made it his mission to capture the emotional lives of the rural poor, unflinchingly writing about race, gender, sexuality, and power. In 1929, hot on the heels of writing The Sound and the Fury, the thirty-two year-old was newly married and the stepfather to two children. He was working as a fireman and night watchman at the University of Mississippi, writing in the middle of the night in the school’s power plant. Faulkner decided that it was now or never if he was going to make a living as a writer. “I set out deliberately to write a tour-de-force,” Faulkner wrote. “Before I ever put pen to paper and set down the first words, I knew what the last word would be…. Before I began I said, I am going to write a book by which, at a pinch, I can stand or fall if I never touch ink again.”

Faulkner delivered. He wrote As I Lay Dying in six or eight weeks (six by Faulkner’s claim, eight by looking at the carbon typescript). He also claimed not to change a word when he was done with the one and only draft, sending it off to his publisher who had to barely lift his red pencil.

As I Lay Dying seemed to come out fully formed. The tale of a family trekking across the countryside to bury their matriarch, Addie, is told from the point of view of each member of the family, including Addie. It is sad, strange, harrowing, funny, and full of pathos. It gets at the inarticulate heart of grief. Witness Dewey Dell: “I heard that my mother is dead. I wish I had time to let her die. I wish I had time to wish I had. It is because in the wild and outraged earth too soon too soon too soon. It’s not that I wouldn’t and will not it’s that it is too soon too soon too soon.” Or poor Vardaman, who is reduced to “My mother is a fish.” Those five words comprise an entire chapter. There are so many lines that stop you, force you to rethink the world and the power of words. “I feel like a wet seed wild in the hot blind earth,” again, from Dewey Dell, but is one of those lines that you read and cry out “Yes! That’s me. That’s how I feel.”

Not two years after the publication of As I Lay Dying, Faulkner would be lured to Hollywood, and later would win the Nobel Prize for Literature. His is a singular American voice. When you ban Faulkner, you ban authenticity and complexity. The easy, the black and white, the orthodox—these are not what readers need to understand the world and themselves. What we need is more authenticity and complexity.