On Robert Cormier’s The Chocolate War 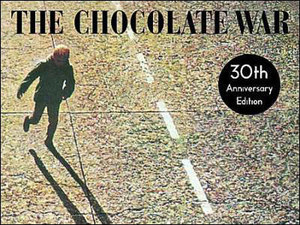 Looking at the posters and seeing his own name there, Archie plotted how his own fifty boxes would be sold. He wouldn’t dream of selling the chocolates himself. He hadn’t touched a box since his freshman days. Usually he found some willing kid who’d gladly sell Archie’s quota along with his own, figuring it was something special to be singled out by the assigner of The Vigils. This year, he’d probably spread the burden around, picking out five guys, say, and have them sell only ten boxes each. It was better than sticking one kid with the entire quota, wasn’t it?

Sitting back in comfort, Archie sighed now, contented, gratified by the heights his sense of fairness and compassion could reach.

—from The Chocolate War

Ever since it was first published in 1974, Robert Cormier’s The Chocolate War (along with its sequel) has been consistently challenged and criticized by schools, libraries, and parents for its language, sexual content, violence, and bleak message. At the same time, the book was cited as the “Best Young Adult Book” at the 1975 National Council of English Teachers convention. What gives?

In the book, there is indeed a large amount of strong language (twenty-four “bastards”, ten “goddamns”, and four “son of a bitches”, among others, according to Sibbap.org), sexual content (“At night in bed, he could have one without even touching himself, just thinking of her”), and violence (the book’s climax is a brutal boxing match in front of an entire student body). What I have always found most startling in Cormier’s novel, about a student refusing to participate in an all-male boarding school’s chocolate candy fundraiser, is its pessimistic takeaway, that there is no glory or triumph in individuality. And that message is a hard pill to swallow, especially in a book directed towards a younger audience that meets challenges of peer pressure everyday. However, as author Robie H. Harris commented on the banning of her own books, “children, even our very young children, do not live in bubbles. They live in the real world.” Cormier would have agreed with Harris’s statement as he defended his novel over the years, telling the Associated Press in 2000, only months before his death, that he felt he must had done something right because “there wouldn’t be all these concerns about an ineffective book.”

The question is then, if the book is effective, why does such an honest-to-life book continue to be objected? Are we that afraid of the truth, which we continue to shroud in Cracker Jack excuses like bad language and sexual innuendo? This is a book that was at the forefront of a new educational trend in the mid-1970s, where young adult fiction was read in middle and high school classrooms rather than classic Victorian, Romantic, or Early American novels.

The answer may be simply that some people can’t look past the novel’s subject matter. However, I can’t help but point out that the book’s politics and mirror on gang intimidation and the abuse of power are as relevant today as they were in 1974; as Cormier bleakly writes near the end of the novel, “they don’t want you to do your thing, not unless it happens to be their thing, too.” While objectors will continue to focus on irrelevant story elements, like language and masturbation, these same objections are what validate how our kids talk, think, and act (a fact I know all too well from experience). Cormier once said that his goal in his writing is to “communicate the emotion that I want [the reader] to feel. I sacrifice everything to that.” We shouldn’t expect anything less from our writers.