On John Steinbeck’s Of Mice and Men 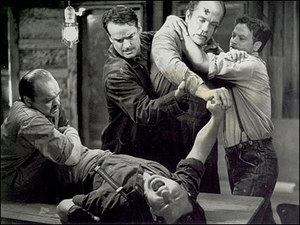 “George’s hands stopped working with the cards. His voice was growing warmer. “An’ we could have a few pigs. I could build a smoke house like the one gran’pa had, an’ when we kill a pig we can smoke the bacon and the hams, and make sausage an’ all like that. An’ when the salmon run up river we could catch a hundred of ‘em an’ salt ‘em down or smoke ‘em. We could have them for breakfast. They ain’t nothing so nice as smoked salmon. When the fruit come in we could can it—and tomatoes, they’re easy to can. Ever’ Sunday we’d kill a chicken or a rabbit. Maybe we’d have a cow or a goat, and the cream is so God damned thick you got to cut it with a knife and take it out with a spoon.”

—from Of Mice and Men (Penguin)

In many 20th century censorship battles, the lines in the sand between artist and plaintiff were clear. Ulysses wasn’t available for import or sale in the U.S. for nearly a decade following its publication because of its coarse language and sexual content. Ginsberg’s Howl faced trial in 1957 for references to gay sex and drug use. Naked Lunch by William S. Burroughs was an obvious target as it contained some of the most disturbing passages of its era, including lurid descriptions of sexual violence.

These high-profile fights form a convenient narrative about how American courts have historically reaffirmed the First Amendment rights of individual artists. Because the artists have—in these famous cases and in others—won out, it seems all too easy to assume that America generally values the rights of writers and readers.

But one look at the American Library Association’s list of the most frequently challenged and banned books could take the gloss off that optimistic view of American openness. Since the ALA list deals most specifically with school and library challenges and bans rather than with broad legal cases, it tells the often-overlooked story of what censorship looks like at the community level.

One of the first things one might notice about the ALA list is that it’s chock-full of books often taught in public schools. That observation is partly tautological—of course the books that are challenged are those that are taught in schools. No doubt, there’s plenty of room for discussion about what we should or should not be reading in classrooms, but it is jarring to see texts like The Handmaid’s Tale, Song of Solomon, and Slaughterhouse Five routinely labeled as indecent, immoral, or unfit for instruction.

Which brings me to John Steinbeck’s Of Mice and Men. In the book, two migrant workers, George and Lennie, have come to a ranch near Soledad, California, to find work. They speak of saving their stake so that they can one day buy a little place where they’ll “live off tha fatta the lan’,” as Lennie puts it. But it’s the middle of the Great Depression and finding decent work, let alone saving money, is a difficult prospect. Add to this that Lennie is physically gigantic yet has the mental and emotional capacities of a child, and the men’s dream of shorter workdays, property ownership, and self-sufficiency seems particularly out of reach.

As recently as 2007, a challenge to the book’s inclusion in a high-school curriculum was mounted in Newton, Iowa, based on its use of “Jesus Christ” as an exclamation in dialogue. Other challenges have cited the novel’s depictions of violence, its use of racial slurs and profanity, and the contention that the book is not appropriate for particular grade levels or age groups. There have even been claims that the book promotes euthanasia.

In an ironic twist, while the book hasn’t been used to justify any actual cases of assisted suicide that I could find, it has controversially been used in Texas as a measure of when it’s acceptable to administer the death penalty to a criminal of diminished intellectual capacity. This so-called “Lennie standard” essentially holds that a criminal of diminished intellectual abilities who is perceived to be smarter than Lennie (who is a fictional character, remember) should be eligible to receive the death penalty, while an individual who is less intellectually capable than Lennie should not. This standard made headlines last month when the state of Texas executed Marvin Wilson, who reportedly had the lowest recorded IQ of any person executed in the state’s history.

While some of the complaints about the novel—particularly those about the book’s inclusion of racial slurs—certainly merit evaluation, it’s hard to shake the feeling that there’s a more fundamental reason that the book has repeatedly raised hackles. It is, after all, a work in which two men, who are not blood relatives, are deeply bonded. The strangeness of their partnership is evident both to the reader and to the people who George and Lennie encounter. Even Slim, the level-headed mule driver whom the two men admire notes, “I hardly never seen two guys travel together […] It jus’ seems kinda funny a cuckoo like him and a smart little guy like you travelin’ together.”

Stranger still might be George and Lennie’s shared dream of owning a place of their own. Their world is one in which bosses own the land and workers break their backs for a month or two at one ranch before moving on to the next. It’s not, in other words, a world in which one can easily buck the system, and it’s certainly not a world in which people treat minorities and those living with disabilities fairly (or kindly).

Things inevitably go awry for George and Lennie and the possibility of realizing their dream dissolves entirely. The story is a tragedy predicated on the idea that working one’s fingers to the bone for little pay and no security is fundamentally corrupt. It’s a tragedy about how even the simplest dream can provide hope in the face of desperation. It’s a tragedy in which the bond between two men is so strong that it leads George to the impossibly difficult and ultimately loving act of sparing Lennie a violent and painful execution at the hands of men who despise him.

Given our country’s growing wealth gap and stagnating wages, it’s hardly a surprise that the book carries contemporary weight, politically speaking. It’s a novel that clearly condemns exploitation, that exalts a dream of communal subsistence living, and in which a mercy killing is an honorable and humane alternative to “justice.”

And that’s why I’m ambivalent about Of Mice and Men falling out of the ALA’s top 10 most challenged books. For two decades, it held that dubious honor, and if the book is challenged less frequently in recent years, I’m less inclined to believe that this is the result of people coming to their senses. Rather, fewer challenges to the text likely means that the book isn’t being taught or read as frequently as it once was even though now more than ever, it’s a book we need to read.