On James Baldwin’s Go Tell it on the Mountain 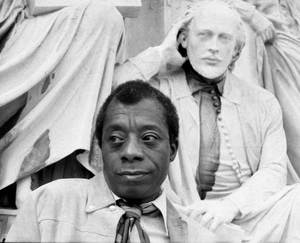 “Everyone had always said that John would be a preacher when he grew up, just like his father. It had been said so often that John, without ever thinking about it, had come to believe it himself. Not until the morning of his fourteenth birthday did he really begin to think about it, and by then it was already too late.”

Whatever fear strikes any reader of Baldwin’s book awaits right in that opening paragraph: an unseemly portrait of faith. It is not literary sex, or violence, or the conflation of violence and sex that Prince William County, Virginia truly found offensive in 1988. If it were, one would think they might have strayed from the William County ninth-grade summer reading list and questioned Thomas Harris’ Silence of the Lambs, a wildly successful bestseller of that very same year. Alas… I’ve read Baldwin’s novel a few times, now, because it helped birth me. I might sincerely recite those opening lines as if they were autobiography. My father, too, was a preacher. And I was, too. Hell, so was Baldwin. What strikes me now as most “dangerous” in the book is its steamy mix of sex and spirit, body and soul, of lust and faith. Which makes good sense. The two urges cry out for transcendence, a lifting out from this world. Deliver me, o lord. Kiss me, kiss me, kiss me… In the case of John, Baldwin’s fourteen-year-old, the cry is for love from his father, his mother, and from Elisha, the strapping young man he looks up to. John loves Elisha. Is he in love? Not quite. He’s too young to know what that is, or what his kind of love means, or to even know his own still-forming identity. It is a love more like that between the biblical Jonathan and David, between men, intense, unnamed. The real power in the novel comes from its take on the incendiary possibilities of love, love in itself, all kinds, and of John’s awakening to the physical world, the sense and scents of sex, its terrors and pleasures, how Elisha’s “thighs moved terribly against the cloth of his suit.”

John’s faith is not like that of his father’s—“He would not be like his father, or his father’s fathers. He would have another life.” John’s faith is not “subject to death or alteration.” It is his “identity” and therefore part of “that wickedness for which his father beat him and which he clung to in order to understand his father.” John’s is a stubborn faith, one that refuses nostalgia, and blatantly decries the traditional worldview of his parents—all rather dangerous notions for a rebellious ninth-grader, no? Maybe worse, John believed that “he had in himself a power that other people lacked, that he could use this power to save himself, to raise himself; and that, perhaps, with this power he might one day win that love which he so longed for.” John is a confident boy, God bless him. A nightmare for his dad, surely, and for any school administrator looking for wills to shape and bend.

I was raised in very religious home, by very loving parents, and yet I always felt like something of an alien, there. This was not me. I did not pine for apocalypse. I eventually left. And yet, to this day, I wonder what those first twenty years of faith, of “belief” were constituted of. I still ask John’s same question. It’s a profound question. What is the difference between “belief” and coming to believe you believe? Like John, I was of the latter camp, and, fed by his confidence (Baldwin’s, too), I left. I chose the here and now, to explore and sanctify the physical world, daily. And I remain moved by John’s simple need “to touch things, the table and chairs and the walls of the room, to make certain that the room existed and that he was in the room.”

Perhaps most dangerous of all was Baldwin’s brave and artful decision to end the novel with John’s salvation. He falls to the floor, convulses, has visions. He speaks to and hears the Lord. He is saved. But this is a complex redemption, a throughly modern and subversive portrait of faith. It is utterly physical, as it causes “a sickness in his bowels, a tightening in his loin strings.” It is death-haunted, despairing, and undiscerning—“Now, John felt only hatred, nothing, only a bitter, unbelieving despair: all prophecies were true, salvation was finished, damnation was real.” And it is sexual—“In his heart there was a sudden yearning tenderness for holy Elisha; desire, sharp and awful as a reflecting knife, to usurp Elisha’s body, and lie where Elisha lay.”

What awaits upon his return?

Elisha kisses John on the forehead, a holy kiss.

And then the sun rises, and the sun shines out, falling over Elisha “like a golden robe,” and it shines on John’s forehead, “where Elisha kissed him, like a seal ineffaceable forever.”

This is what truly scares them, all of those afraid of this book: the sun shines on us all, everyone of us. So should love. Shout it from the rooftops, go tell it on the mountain. Pray every ninth-grader understands that simple message, and makes for us all a better world.