On J.D. Salinger’s The Catcher in the Rye 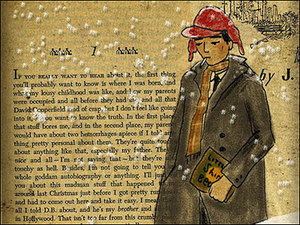 While I was walking up the stairs, though, all of a sudden I thought I was going to puke again. Only, I didn’t. I sat down for a second, and then I felt better. But while I was sitting down, I saw something that drove me crazy. Somebody’d written “Fuck you” on the wall. It drove me damn near crazy. I thought how Phoebe and all the other little kids would see it, and how they’d wonder what the hell it meant, and then finally some dirty kid would tell them—all cockeyed, naturally—what it meant, and how they’d all think about it and maybe even worry about it for a couple of days. I kept wanting to kill whoever’d written it. I figured it was some perverty bum that’d sneaked in the school late at night to take a leak or something and then wrote it on the wall. I kept picturing myself catching him at it, and how I’d smash his head on the stone steps till he was good and goddam dead and bloody. But I knew, too, I wouldn’t have the guts to do it. I knew that. That made me even more depressed. I hardly even had the guts to rub it off the wall with my hand, if you want to know the truth. I was afraid some teacher would catch me rubbing it off and would think I’d written it. But I rubbed it out anyway, finally. Then I went on up to the principal’s office.

I went down by a different staircase, and I saw another “Fuck you” on the wall. I tried to rub it off with my hand again, but this one was scratched on, with a knife or something. It wouldn’t come off. It’s hopeless, anyway. If you had a million years to do it in, you couldn’t rub out even half the “Fuck you” signs in the world. It’s impossible.

I was the only one left in the tomb then. I sort of liked it, in a way. It was so nice and peaceful. Then, all of a sudden, you’d never guess what I saw on the wall. Another “Fuck you.” It was written with a red crayon or something, right under the glass part of the wall, under the stones. That’s the whole trouble. You can’t ever find a place that’s nice and peaceful, because there isn’t any. You may think there is, but once you get there, when you’re not looking, somebody’ll sneak up and write “Fuck you” right under your nose. Try it sometime. I think, even, if I ever die, and they stick me in a cemetery, and I have a tombstone and all, it’ll say “Holden Caulfield” on it, and then what year I was born and what year I died, and then right under that it’ll say “Fuck you.” I’m positive, in fact.

J.D. Salinger and children—precious, precocious, but profane? Among the book banners were there any who had read one story from Nine Stories, and recalled “For Esme—With Love and Squalor,” and the soldier for whom Esme’s wish was that he return from war with “his faculties intact?” Or Uncle Wiggly in Connecticut with the imaginary childhood friends, Mickey Mickeranno and Jimmy Jimereeno, or Down at the Dinghy, where a boy overhears the maid call his father “a big-sloppy-kike” and tells his Mother who asked if he knows what it means, and answers, “It’s one of those things that go up in the air…with strings you hold.” (I taught a weekly seminar on Salinger at the University of Texas at Austin, and not one student had ever heard the word “kike.” Some things get better with time.) Or, for crying out loud, had anyone in the ban-the-book-crowd sat down with Franny and Zooey? If they banned Salinger to protect the innocent, they chose the very man for whom bruises of heart and mind among the young was an animating force.

What Salinger gave to us were memorable meeting points between innocence and the world’s soiling stains. There was so much authenticity in his stance and sympathy that his artificialities were most always incidental. He provided a rare knowledge of war’s toll and adolescent wounds and resilience. His coinage of phrase and deft sense of moment—wry, joyful and touching—should have shamed those whose sanctimony banned Catcher in the Rye. As Holden would have said, they were jerks.