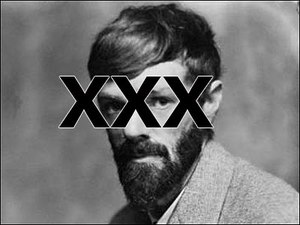 More often than not, we read ourselves into our books: and it follows that, with sex on our minds, we read one of the most notorious of the banned masterpieces, D. H. Lawrence’s Lady Chatterley’s Lover, in great anticipation of sweaty encounters in the woods between Mellors and Connie. But refresh your memory, if you’ve read the book, or take a dip in these supposedly turgid waters if you haven’t, and look at a passage that appears early in the novel:

Wragby was a long low old house in brown stone, begun about the middle of the eighteenth century, and added on to, till it was a warren of a place without much distinction. It stood on an eminence in a rather line old park of oak trees, but alas, one could see in the near distance the chimney of Tevershall pit, with its clouds of steam and smoke, and on the damp, hazy distance of the hill the raw straggle of Tevershall village, a village which began almost at the park gates, and trailed in utter hopeless ugliness for a long and gruesome mile: houses, rows of wretched, small, begrimed, brick houses, with black slate roofs for lids, sharp angles and wilful, blank dreariness.

Phrasing such as this is not what one might expect from a novel with a scandalous rep, perhaps the most scandalous of any: the description is poetic but politically aware, evoking not so much a dreamy romp in the hay (or a gritty fling with the game-keeper) as the incipient clash of classes. And that is what is at the heart of Lady Chatterley’s Lover, a novel written by a miner’s son born in the aftermath of the Industrial Revolution—class conflict, the lopsidedness and decadence of a society ruled by a few and sustained by the many—not sex. In paragraphs such as the above, the foundation is being laid for a book that is less romantic idyll than radical manifesto.

Connie was accustomed to Kensington or the Scotch hills or the Sussex downs: that was her England. With the stoicism of the young she took in the utter, soulless ugliness of the coal-and-iron Midlands at a glance, and left it at what it was: unbelievable and not to be thought about. From the rather dismal rooms at Wragby she heard the rattle-rattle of the screens at the pit, the puff of the winding-engine, the clink-clink of shunting trucks, and the hoarse little whistle of the colliery locomotives. Tevershall pit-bank was burning, had been burning for years, and it would cost thousands to put it out. So it had to burn. And when the wind was that way, which was often, the house was full of the stench of this sulphurous combustion of the earth’s excrement. But even on windless days the air always smelt of something under-earth: sulphur, iron, coal, or acid. And even on the Christmas roses the smuts settled persistently, incredible, like black manna from the skies of doom.

In fact it’s not so hard to imagine that this book, first published in expurgated form in 1928 and only released in the U.S. in its original incarnation in 1959, was held up as a prime exemplar of the depths of artistic depravity. What scandalized (and scandalizes) conservative forces and even many of Lawrence’s colleagues in the literary world was not only Connie’s adultery, but the author’s failure to condemn the same—and in addition Connie’s choice of a partner. And that this partnership—for that is what it is, unlike the vassal/lord relationship between her and her husband—is sustained, and triumphs in the end, is unbearable for those who like their marriages traditional, their women meek, and their ruling class upheld.

Connie, “warm” and “womanly”, drifts through life, diffident, disconnected: she observes (and profits from) the horrors of the furnaces but as though from a great distance, and remains unmoved, unable to take action of any sort. She strolls aimlessly through the grounds of the estate, kicking up leaves; she dutifully consorts with the sycophants surrounding her and her husband Clifford, an aristocratic writer of “rather spiteful . . . meaningless” “stories about people he had known”, but never engages. It is only when she rejects aristocracy and traditional English society and takes up with Mellors, spurning her assigned role in things, that she begins to define herself. Clifford, the writer, aristocrat and supposed intellectual, is revealed as a callow, self-serving brute; love, beauty and hope are on the side of the self-exiled rebels.

Lady Chatterley’s Lover is a triumph of the modernist, humanist impulse, uplifting and revolutionary. No wonder they banned it then, and still do.