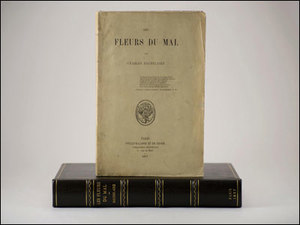 from “The Vampire’s Metamorphoses”

When she had sucked out all the marrow from my bones
And I languidly turned toward her
To give back an amorous kiss, I saw no more
Than a wine-skin with gluey sides, all full of pus!
Frozen with terror, I closed both my eyes,
And when I opened them to the bright light,
At my side, instead of the robust manikin
Who seemed to have laid in a store of blood,
There quivered confusedly a heap of old bones,
Which of themselves gave forth the cry of a weather-cock
Or of a sign on the end of an iron rod
That the wind swings to and fro on a winter night.

In August of 1857, less than two months after Charles Baudelaire published Les Fleurs du Mal, a French court banned six poems from its contents: “Lesbos,” “Femmes damnés,” “Le Léthé,” “À celle qui est trop gaie,” “Les Bijoux,” and “Les Métamorphoses du Vampire.” The judges argued that these pieces would “necessarily lead to the excitement of the senses by a crude realism offensive to public decency.” In other words, they were too sexy. The poems resurfaced once again in Les Épaves: a chapbook-like text containing 23 pieces, published separately in Brussels in 1866. A “mutilated” version of the book, as Baudelaire referred to it, was published along with new work in 1861 and posthumously in 1868.

I have never read Les Fleurs du Mal. I don’t speak French, and I suspect that translation is its own form of mutilation. I have read, many times, a New Directions edition of Flowers of Evil from 1955, which contains three of the six banned poems. My favorite, “The Vampire’s Metomorphoses” is not included.

In two swollen stanzas, “Vampire” employs many themes essential to my own work: the succubus, the dissolution of fantasy, the death wish, and the death unwish. A presumably male speaker makes love to a vampirous woman who embodies the attributes of a femme fatale. In various translations she possesses “moist lips,” “a mouth red as strawberries,” “words impregnated with musk,” as well as the capacity to replace the solar system for any man who sees her nude. While making love, the woman “lusts blood” and sucks the speaker dry of his marrow. Yet when this transfusion is complete, she is neither fattened nor enlivened. Rather, she herself is drained and rendered skeletal: an empty “wineskin.”

From a religious perspective, Baudelaire revels in the vampire’s role as an outlier for whom “impotent angels damn themselves.” It is here that his desire to make beauty bloom out of evil is realized. But as he writes in his first preface to Les Fleurs du Mal, “The poet is of no party. Otherwise he would be a mere mortal.” This poem is not merely pushing an outré sexual agenda. On a purely physical level, the speaker is satisfied with his masochistic role, emitting a “loving moan” at being consumed. The dissolution of self, and self-control, is its own reward. But the vampire’s subsequent annihlation embodies the end of a fantasy—one that sucks the dreamer dry only to disappear. When the object of fantasy ceases to transcend temporal reality, when she takes on the “faceless” look and “pus” of death, the speaker can no longer escape his own mortality through her.

Like Byron, Baudelaire had no tolerance for those who lack imagination. I don’t either. I want every fantasy to sustain itself forever. I want multiple dark and romantic fantasies and I want them to defeat the facets of reality that I find most distasteful: time, drudgery and death. This is a tall order, a crazy demand. Rather than try to live out every fantasy, I write them. Says Baudelaire, “Being as chaste as paper, as sober as water…it would not displease me to be taken for a debauchee, a drunkard, an infidel, a murder.” In my work, I too fuck and murder. Sometimes, a poem’s total reality is a fantasy that never reveals itself as a fantasy. At other times, I seek within a text to acknowledge the painful relationship between fantasy and reality. Baudelaire’s gift is to make this acknowledgment, but first to allow a poem to live out its every last want.