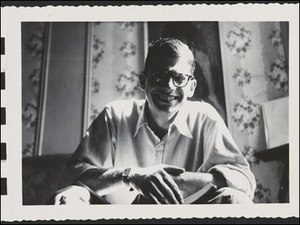 When I was 19 and Ginsberg was in his early 50s, I won the job—won because I had a car—of picking him up at O’Hare Airport and driving him to South Bend, where every year Notre Dame had the bad judgment to give a band of sophomores $15,000 to organize a literary festival. I knew nothing and my car, a fishtailing behemoth of a Buick, sucked; its systems could go dark and shut down for no reason, even at highway speeds. I dreaded a breakdown, or anything else that would drag out what were sure to be 120 very awkward miles.

But Ginsberg was lovely. Cheerful, comfortable, sane, witty, he shared just enough of himself to put me at ease, so by the time the snow starting falling there was no anxiety at all to settling in to a cautious, responsible speed.

Somewhere near Gary, mid-conversation, Ginsberg dove for his shoulder bag and scribbled a note. I was dying to know, and within a few miles I’d worked up the nerve to ask him what he wrote.

I tried to picture it coming toward me again in the snow.

And as he said that, I could read it. And it was true:

I saw, for the first time, what it really means to be a poet—to have the habit of mind where the universe reveals itself through linguistic forms the way, for physicists, it whispers its truths through math equations.

That was in February, 1979, twenty-three years after the first public recitation of “Howl” and twenty-one years after a California judge cleared Lawrence Ferlinghetti, Ginsberg’s publisher, and Shig Murao, the City Lights Bookstore manager who sold a copy of Howl and Other Poems to an undercover cop, of obscenity charges.

Nearly three decades later, closing in on the age Ginsberg was that winter, I found myself summoning a box of files from the PEN archives because, incredibly, “Howl” still scared people. A few years before, the FCC had raised the fine for violations of its obscenity standards to up to $325,000 per offending word. Now, on the 50th anniversary of Ferlinghetti’s and Murao’s court victory, WBAI-FM radio in New York was balking at broadcasting the poem for fear of incurring bankrupting fines.

The box contained records, some with Ginsberg’s own comments and correspondence, of earlier FCC skirmishes, most recently a 1995 decision in a case in which PEN and Ginsberg were co-petitioners. That decision had widened the window during which “Howl” and other material deemed not obscene but indecent could be broadcast, from midnight to 6 a.m. to 10 p.m. to 6 a.m. Now, in 2007, we had lost Ginsberg, and things were clearly trending in the opposite direction.

In that same box was another batch of files filled with messages and notes from Ginsberg, these ones often fired off and faxed as he was preparing to travel overseas. I’m heading to these countries, he would say. Who are the writers in jail or in trouble there? Whose case should I be pressing?

I’d been to some of those same countries by then. I hadn’t known I was following in his footsteps, in a way, not as a poet but as a representative of PEN. But wherever I went, it was clear he had been there; the worse the repression a country had suffered, the more the writers remembered Ginsberg’s visits, and the better they knew his work. “Howl” may still agitate censors in the U.S., but I’ve heard the phrase “starving hysterical naked” in so many beautiful strange accents and cadences that I hear it now as a natural exhalation of the earth.