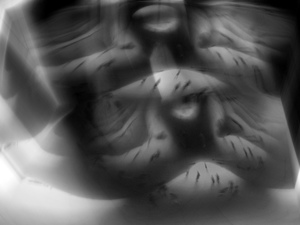 Noon and Do Ghosts Remember are translated from the original German.

outside the shadows are dwindling but we are so tired again.

buildings: inside couples lie close and barely know one another.

we are there too, you and me too on the floor. my skin cools against

yours, outside as always the heat but I am as always too cold. are you

asleep, my friend? one clock hand stopped dead on top of the other and someone

do ghosts remember? which ones do? which
ones don’t? and if they do, which organ

might they use? brain, bones, maybe
the eyes or perhaps after all the ear?

do they recall the long grass by the yard?
the grating of rose thorns as they grew

how the pear-tree creaked, the magnolia
sang with its turbines of blossom on every twig

brigades of bluebottles inside, how the planes
purred in the insane blue bowl of the sky

-and does someone recall the thrum of the
ghosts in the tops of the trees, in the thicket of air?

Publishers and editors who wish to express an interest in any of these projects are invited to contact PEN Literary Awards Coordinator Arielle Anema (arielle@pen.org) for the translators’ contact information.

Ulrike Almut Sandig was born in Großenhain (GDR) in 1979 and started publishing her poetry by pasting it on construction fences (eyemail) and reading at concerts (earmail). Today she works with musicians, composers, and film makers to stress the musical aspects of language and voice in her performances. She holds a MA in Religious Studies and Modern Indology and an MFA from the German Literary Institute in Leipzig. She has published three volumes of poetry, a story collection, and two audiobooks of poetry and pop music. In 2015 Schöffling & Co. published her second story collection Buch gegen das Verschwinden (Book against the Disappearing). Her many awards include the prestigious Leonce-und-Lena Prize (Darmstadt), and the Poetry Award (Meran).

Karen Leeder is a writer, critic and translator and is Professor of Modern German Literature at New College, Oxford. Recent translation projects include Volker Braun, Rubble Flora: Selected Poems, with David Constantine (Commended for the Popescu Prize in 2015), and Michael Krüger, Last Day of the Year: Selected Poems. Prizes include the Schlegel-Tieck Prize for her Evelyn Schlag, Selected Poems (2005) and The Stephen Spender Prize for her translations of Durs Grünbein (2013). In 2015 she was awarded the English PEN translation pitch prize for her versions of Ulrike Almut Sandig. Website: Mediating Modern Poetry