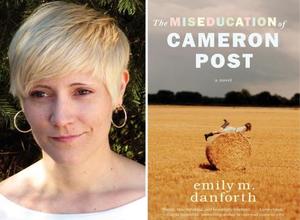 The following was issued by PEN American Center partner organization  The National Coalition Against Censorship. PEN joined their efforts to help students stand up against book banning in Delaware.

NEW YORK—The National Coalition Against Censorship (NCAC) is proud to announce the 1st place winner of its essay contest in response to the Delaware ban of emily m. danforth’s novel The Miseducation of Cameron Post, Hannah Lowe.

The contest, co-sponsored by PEN and other free expression groups, invited high school students in Delaware to write a 250-500 word essay saying what they felt school board members should know about The Miseducation of Cameron Post before deciding whether it should be removed from a school reading list. This followed the Cape Henlopen School Board’s decision first to remove the book, and then to eliminate the entire summer reading list for incoming 9th grade students at Cape Henlopen High School. Cameron Post, a book concerning a teenager’s struggles to come to grips with her homosexuality, came under fire from board members. The board claimed the book was removed because of profanity, but there is evidence that the decision was also motivated by hostility to the book’s subject matter. The board’s actions attracted considerable local and national concern, including letters from the contests’ sponsors.

In her essay, Lowe passionately criticizes the school’s decision to remove the book. “It is the natural instinct for adults to look out for children; to shield young people from what grown-ups view as evil in the world. However, this parental guidance can grow into overprotection,” Lowe writes. “Censorship allows prejudice to flourish instead of diminish. After all, narrowing the world of media for teens will only narrow the world we grow up to create.”

The winning essaysare a compelling, eloquent response to a Delaware school board’s controversial decision to remove the book from the summer reading list. The second and third place prize winners are Katie Redefer and Rachel Wagner, respectively. In her essay, Redefer, argues that the book’s removal downplays the gravity of suicide rates among LGBTQ teens in the country. Wagner questions the board’s decision to judge the 470-page book on the scant 10 pages of text that contain foul language.

“We were overwhelmed and inspired by the submissions we received,” said NCAC Executive Director Joan Bertin. “The essays showed that teenagers can be mature and thoughtful in their approach to books that some adults consider controversial and inappropriate. They also suggest that these students have a greater appreciation and respect for the value of literature and intellectual freedom than some members of the school board, who voted to remove the book as a summer reading option without having read it. ”

Noted children’s literature expert Pat Scales, who judged the essays, had high praise for all entries. “The students of Delaware were right to be concerned, and even angry, when the Cape Henlopen School Board sought to abridge the free speech rights of students by removing The Miseducation of Cameron Post from the ninth grade summer reading list,” Scales commented. As the former President of the American Library Association’s Association for Library Service to Children, Scales brought unique knowledge and experience to her role. “It is clear that the students who submitted essays understand what the school board doesn’t – books should not be judged by taking words and thoughts out of context.”

The announcement of the winners coincides with Banned Books Week, which takes place this year from September 21-27. Launched in 1982, Banned Books week is the national book community’s annual celebration of the freedom to read, aiming to draw attention to the many books that face challenges across the country throughout the year.

About the National Association Against Censorship

NCAC’s mission is to promote freedom of thought, inquiry and expression and oppose censorship in all its forms. The Coalition was formed in response to the 1973 Supreme Court decision in Miller v. California, which narrowed First Amendment protections for sexual expression. For the last 40 years, as an alliance of more than 50 national non-profits, including literary, artistic, religious, educational, professional, labor, and civil liberties groups, NCAC has engaged in direct advocacy and education and mobilized support for First Amendment principles and addressed new modes and targets of censorship.