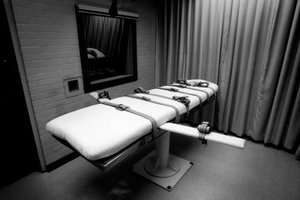 It’s a strange thing, waiting for someone to be killed.

It happened one evening. The local news reported the impending execution of a Tennessee death row prisoner like any other story. They showed file footage of the accused, showed the handful of protestors — and the larger handful of death penalty supporters — camped outside Riverbend Maximum Security Institution where the execution was to take place, talked about the lack of evidence, and they mentioned that the condemned was out of appeal options, and the governor would not likely grant a stay.

And then it was on to other news: the unemployment rate changed a few more points; the Titans had traded one controversial player for another; there was violence in the Middle East. Soon it was on to weather, sports, and before I knew it, Letterman was counting down the top ten offensive odors found in New York City taxi cabs.

Meanwhile, believe it or not, someone somewhere would soon be killed.

A man was about to be murdered, and people knew about it, but no one even called the cops.

Is that an absurdity, to call an execution a murder?

Is that not what happened when the needle was inserted and the buttons pushed?

They surely “knew” they were killing the guy, right?

And take note: the statute gives no exception for executioners or other state-sanctioned killers. According to the letter of the law, the people who perform executions—who are of course only doing their jobs—are, technically, murderers.

Additionally, the state and federal judges who refused to grant a stay committed the act of conspiracy when they neglected to stop the intentional
and/orpremeditated execution. According to TCA § 39-12-103, there’s a criminal conspiracy “if two (2) or more people agree that one (1) or more of them will engage in conduct that constitutes the offense.”

The courts “agreed” that a man should and would be killed. According to the law, they conspired to commit murder.

Okay, so maybe I’m coming off as just a tad bit facetious here, but it doesn’t change the fact that murder, even the government-approved variety, is still murder, by the very definition of the law. What’s more (and I’m going out on a limb here), capital punishment is immoral, and it’s a sin of our modem, civilized society.

And, by the way, I’m not alone in such sentiments—just ask the citizens of Canada, Mexico and Europe. In fact, the European Union considers capital punishment so inhumane that EU countries won’t extradite someone accused of a capital crime to a countiy that practices capital punishment unless that countly guarantees that the death penalty won’t be sought.

But in the United States, specifically in Tennessee, it’s a different stoiy. They like to kill people here.

I guess I’m just more highly evolved or perhaps more civilized than the majority of my fellow citizens. Sounds conceited, I know, but how else do I explain this unusual empathy and compassion I have for my fellow huhian beings?

I maintain the preposterous notion that life is sacred, and that society should never take it, not even from those who have.

Sometimes people do very atrocious things, and sometimes people are simply dangerous and unable to change, and those people should probably be kept away from society, but to kill them flies in the face of the very principles we’re trying to uphold.

I’m not the first to come up with such notions, of course. Italian criminologist and economist Cesare Beccaria said this same stuff some 250 years ago, noting that, by legitimizing the very behavior that the law seeks to repress —the taking of life — capital punishment contradicts the moral message it conveys.

Now, sure, maybe some people “deserve” to die, such as mass murderers, child killers and those rude jerks that cut you off in traffic; but that is simply my personal opinion, and opinion is not sufficient justification for the stateto kill people, particularly when it does so arbitrarily and haphazardly.

For instance, statistically, the murder of a white victim is regarded as more deserving of the death penalty than the murder of a non-white person. According to the Death Penalty Information Center, just half of all murder victims are white, yet nearly 80% of all executions are for the murders of white people.

And in Tennessee, whether or not a convicted murderer is sentenced to death depends upon the region of the state where the crime occurred—and the personal preferences of individual prosecutors.

A report by the Tennessee Comptroller’s office found that some prosecutors seek the death penalty only in cases considered the “worst of the worst,” while other prosecutors seek it in every case in which they believe a jury will deliver.

Leading the state in death sentences, however, was Shelby County — home of Memphis — which sought the punishment in a whopping 44.7% of cases.

And despite what some death penalty proponents say, capital punishment is not a deterrent. Ask any convicted murderer—and I’ve known more than a few—and they will tell you that, at the time a crime is committed, they didn’t pause to consider the state’s stance on capital punishment.

Murder is typically a desperate crime committed by desperate people who typically don’t think or care about the punishment options they might face if they are caught.

And as for an intentional murder that is coolly planned in advance and free of excitement, it’s just like any other premeditated crime: it’s the likelihood of getting caught, not the severity of punishment, that has any potential of preventing it — a phenomenon also observed by Beccaria two-and-a-half centuries ago.

The deterrent argument lacks substance, and criminologists and others know it. A 2012 review by the federally-funded National Research Council found that, after three decades of death penalty research, there is no reliable data that shows capital punishment is a deterrent to homicide.

No, what the death penalty is really about is vengeance and retribution, also known as “justice” or “closure.”

And in my alienated perspective, it seems odd to me that a state with such a large number of self-professed Christians would support a system that kills people out of vengeance.

How is it, I wonder, that Ch4stians could actually support the death penalty?

Many point to Old Testament passages to support their position, such as God’s instructions to Noah and company after the Great Flood (“Whoso sheddeth man’s blood, by man shall his blood be shed: for in the image of God made he man.” Gen. 9:6), or the body of civil and religious laws found in other OT books, such as Leviticus, Deuteronomy and Exodus.

The latter is the source for the “eye-for-an-eye” mantra that many use to reconcile the death penalty with Christianity (see Ex. 21:24). While this book containing ancient Jewish laws does require execution for a man “that smiteth a man, so that he die” (Ex. 21:12), it also mandates a death sentence for one who “curses” his parents (vs. 17).

If modem Christians were to follow the tenants of Exodus, the leading cause of death for American teenagers would be public stoning.

It seems to me that Christian supporters of the death penalty forget one important detail: the New Testament.

I’m no theologian or Bible scholar, but it seems obvious that the message and example of Jesus — set out in the four Gospels — encourages those who wish to follow Him to embrace love and forgiveness.

A prime and obvious example comes from the Gospel of John. As Jesus was teaching a gathering of people, Jewish officials brought in a woman who had been caught committing adultery. Note that, in the Old Testament, where it says some crimes must be paid for with an “eye for an eye,” it also says that the sin of adultery is punishable by death (Lev. 20:10). That’s just the way they handled things back then: they killed you.

But here’s Jesus, preaching about love and forgiveness, and the “prosecutors,” if you will, want to know how to deal with this wayward adulteress who has committed a sin that, according to OT law, warranted a death sentence.

Jesus, it turns out, wasn’t big on violence and vengeance. After cleverly pointing out that the accusers themselves were not sinless (and therefore had no standing by which to accuse someone else), He pardoned the woman and told her to sin no more (John 7:11).

When confronted with the death penalty, Jesus passed on it.

In Matthew, Jesus said, “Ye have heard that it hath been said, An eye for an eye, and a tooth for a tooth: But I say unto you, That ye resist not evil: but whosoever shall smite thee on thy right cheek, turn to him the other also.” (Matt. 5:38-39)

This doesn’t mean that Christians should let others run over them or get away with crimes. It’s simply a denouncement of revenge and retaliation, a message of love and forgiveness that was absent in the old Jewish edicts.

Christians who are unable to follow Christ’s example, however, and who refuse to overcome their vengeful urges, also use New Testament references to support their position.

In Romans 13:1, for example, the apostle Paul told Roman Christians: “Let every soul be subject unto the higher powers. For there is no power but of God: the powers that be are obtained by God.”

Most interpret this verse to mean that Christians must obey the government and its laws—including laws upholding the death penalty—because governments govern only by the grace of God.

Beyond the contextual aspects or Paul’s letter (written over 2,000 years ago to an ancient civilization ruled by an imperialist, military-style dictatorship), the “powers that be” in this country today, are the people themselves. This is a democratic republic, and it’s the voters who, at least indirectly, decide what the law should be. The State of Tennessee kills its citizens only because the electorate permits and sanctions those killings.

Obviously, the old Jewish law was meant for its time and place, but Jesus ushered in a new way of thinking.

If you ask “what would Moses do” to someone caught killing another man, the answer would probably involve stones and a violent death, which a lot of people today would support.

If you ask “what would Jesus do,” however, the answer would inevitably be something different.

But that doesn’t matter to most politically active Christians in this country. Abortion and gay marriage are issues worth protesting and can decide political races, but the death penalty well, that’s the ignored elephant in the room, the “beam that is in thine own eye,” la Jesus’s Sermon on the Mount (Matt. 7:3-5).

Meanwhile, the state has promised to kill many more people who currently sit on death row. These are people who will probably be murdered, yet no one calls the cops; no one tries to get them out of danger. We simply leave them to their fate.

And that seems like a strange thing, waiting for 86 people to be killed.