An Evening with Liao Yiwu 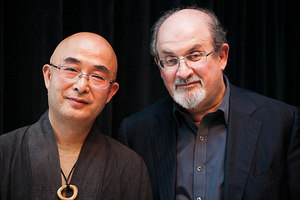 PEN American Center is honored to present poet, novelist, musician, and documentarian Liao Yiwu, one of China’s most exciting and most censored writers, in his first U.S. appearance.

Liao Yiwu, who has been called the “Studs Terkel of China” for his vivid literary portraits of the lives of ordinary Chinese, was denied permission to travel to New York for the PEN World Voices Festival of International Literature earlier this year, but escaped to Berlin via the Vietnamese border on July 6, 2011. Mr. Liao was imprisoned for four years in the 1990s for his epic poem “Massacre,” a condemnation of the government’s bloody crackdown at Tiananmen Square, and has endured constant harassment since. Though all his books are banned in China, he has continued to write. He is visiting New York on the eve of the publication of his new book, entitled God Is Red: The Secret Story of How Christianity Survived and Flourished in Communist China, translated by Wen Huang.

Huang, a journalist and author, also joins Liao at the event. Not only has Huang been working actively to support and publicize Liao Yiwu’s work since 2001, he has translated Liao’s major works into English, including God is Red. Huang also received a PEN Translation Fund Grant in 2007.

PEN President Kwame Anthony Appiah notes, “As it gets harder for independent-minded writers to leave China, an opportunity like this to hear directly from a great Chinese writer is an increasingly precious thing.”

This very special evening of music and words includes a reading from his forthcoming book and a performance of the xiao, or Chinese flute, which Mr. Liao learned to play while incarcerated. PEN World Voices Festival founder and chair Salman Rushdie introduces the event and Mr. Liao is joined by journalist Philip Gourevitch for an on-stage interview.