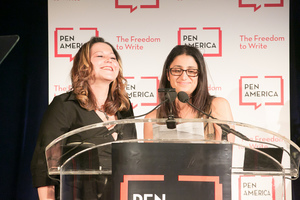 Lee-Anne Walters and Dr. Mona Hanna-Attisha were two essential voices in exposing the lead poisoning of Flint’s water supply, calling out grave damage to public health. A mother of four, Walters faced off against local government apathy, taking months of independent research on Flint’s water supply and testing protocols directly to the EPA. Dr. Hanna-Attisha conducted a survey to find that the number of lead poisoning cases had doubled since the city’s move to a new water system, and announced her findings at a press conference during a time when the city and state continued to insist that Flint’s water was safe. Together, the actions of Walters and Hanna-Attisha are a vivid demonstration of the potency of speech in forcing truths out into the open and the centrality of citizens’ expression to a thriving democracy.

Lee-Anne Walters: I feel honored and blessed to be here to receive the 2016 Toni and James C Goodale Freedom of Expression Courage Award.  I want to say thank you to my best friend and husband Dennis, who has been my rock through all of this. Thank you to my amazing children, Kaylie, J.D., Gavin, and Garrett. Without all their love and support, the crazy hours spent working on this would not be possible. I want to say thank you to the first people to believe me when no one else would, Miguel Deltoral and Professor Marc Edwards. Two of the best mentors anyone could ask for.

I want to congratulate Dr. Mona who is also being honored here tonight. Thank you for all of your hard work on behalf of the children of Flint and your efforts to ensure our children have the brightest futures possible.

I want every resident in Flint to know I am not accepting this award just for myself but for every one of us who was ridiculed, dismissed, and ignored in our fight for clean water. We are one. We are given this award because we refused to be silenced.

I will continue to fight until the Lead and Copper Rule is properly revised to protect people. I will not stop until I am assured no mother will ever be asked again by her child, “Mommy is this clean water or yucky water?” like my 5-year-old twins still ask me daily.

Because of what my family and all the families in Flint continue to go through, I along with other Flint residents have launched a non-profit to assist the forgotten.

I thank you again for having me here tonight. Some say it is courage, some say heroism, but I am honestly just a mom, doing what moms do, protecting their children.

Dr. Mona Hanna-Attisha: Thank you. It is an incredible honor to be here today to receive the 2016 Toni and James C. Goodale Freedom of Expression Courage Award.

It is particularly an honor receiving this award with Lee-Anne Walters. In Flint, we would be nowhere without Lee-Anne. Her stubborn and effective activism started the domino effect. Without her, I have no doubt kids would be drinking lead-tainted water. She is a Flint water warrior momma you don’t want to mess with.

I also want to recognize my parents and my daughter, who are here. Talia, David, and Nina, please stand up. My parents instilled in me the values that led me to stand up. We are Iraqi-Americans, leaving Iraq 35 years ago, because we didn’t have freedom of expression. My grandfather was a political prisoner and lost his job and career because of his activism. The mission of PEN is in our DNA. When my dad went off to college while the Ba’athists took power, my grandma buried all of my dad’s books with red covers. We understand the value of freedom of expression. But even when they left Iraq, they led by example and continued to speak up about the atrocities of the regime, including the massacre at Halabja, where children were poisoned to death by chemical weapons.

On a lighter note, my daughter Nina is here, primarily to see Ms. Rowling, who is teaching children through her Harry Potter books, the importance of standing up for justice and against racism.

It is difficult to comprehend that in Flint, in the middle of The Great Lakes, in 2016, we cannot guarantee a population safe access to drinking water. And for 18 months, residents were told to relax. Residents would go to town hall meetings with jugs of brown water and get arrested.

Who listens to citizens when a city has lost democracy, when the city is under state-appointed financial emergency management, when the city is poor and predominantly minority? No one in government was listening to the courageous and heroic people of Flint.

Yet there were so many courageous truth-tellers trying to sound off alarm bells—parents, journalists, experts from Virginia Tech and even a brave EPA official.

All of these truth-tellers were dismissed and ridiculed. For my part I needed to know the truth and that truth needed to be shared as soon as possible. For me this was a “choiceless choice”—I had no other option. I was doing my job. It is my job as a pediatrician to protect and advocate for our kids, especially our most vulnerable kids.

I used the data the state already had, but didn’t bother to understand, and used modern analytical techniques and software to prove the increased lead levels because of the water switch. We out-scienced the state, but we shouldn’t have had to.

When my findings were dismissed and ridiculed I even doubted myself. I felt sick. But with the support of media, and along with others who raised their voices, it took evidence that children had increased elevated lead levels to finally turn this story. Soon after, residents were told not to drink the water and later a federal emergency was declared.

Already, the story of Flint, perhaps like the story Rachel Carson told of communities poisoned by DDT, is changing the conversation not only about lead in water, but about democracy, austerity, environmental racism, indifferent bureaucracies and deadly infrastructure. This is a story about the forgotten places in this country, forgotten people.

Like I said, I was just doing my job, and my job today is to continue to fight for our kids. To garner the long-term resources that they will need to not only recover, but to thrive. And to tell the story of Flint, so it doesn’t repeat elsewhere.

Thank you again for this incredible honor. I accept it on behalf of the smart, proud, beautiful, and resilient children of Flint, the true heroes and survivors of the water crisis.