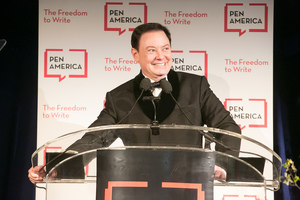 Welcome to PEN’s largest and most successful gala ever. We have raised more than $1.75 million tonight, far ahead of our goal. I honor the gala co-chairs: Cathy Graham, Jay McInerney, and Alexandra Munroe; and our honorary chairs: Toni Goodale and Annette Tapert. I thank the remarkable committee who have pulled this off, and the Literary Hosts, who have been such valiant supporters of our work. I acknowledge PEN’s tireless staff, under the exceptional leadership of our Executive Director, Suzanne Nossel. I am also grateful to our generous award benefactors: Annette Tapert and Joe Allen, Toni and James Goodale, and Pam and Peter Barbey. I extend warmest thanks to all of you, our guests and supporters, who strengthen PEN’s mission to celebrate literature and defend freedom of expression.

PEN’s new logo, evocative of both a book and a thought bubble, reflects our commitment to speaking, writing, and thinking. Our defining values are likewise celebrated in a new tagline: “The Freedom to Write.”

A few months ago, my husband and I asked our six-year-old son where in the world he’d most like to go. George thought for a moment, then said, “Syria.” John and I were alarmed. “Syria? George, why on earth would you choose Syria?” Using a phrase that is common parlance in our house, he shook his head and said, “Somebody has to tell those people about inappropriate behavior.” When I recounted this story to the celebrated Iranian-American writer Azar Nafisi recently, she said, “Perhaps he could go to Washington first.”

The current election cycle has repeatedly called into question the principle that words—uttered, written down, heard—are the most powerful basis there has ever been for social justice. We have a presidential candidate who deploys insults and unapologetic lies to consolidate his power. We face a larger political establishment that has deliberately escalated xenophobia, frightening everyone so much that many Americans won’t leave their country, nor rise to welcome those who knock on our door. The statement, “We’ll build a wall” is itself a wall of words. It subverts the singular ability of language to help us sympathize with people who are different from us. Hatred is the inevitable consequence of this linguistic pollution, of using speech to construct barriers where we need bridges.

People love and tolerate one another in words. There has never been a peace treaty that did not make use of them, nor any redress of human inequalities without something being said or written. There is a principle in biblical interpretation that the angels on the Ark of the Covenant were placed to face each other to denote that God exists between people, more in the discourse than in those who are discoursing. Language substantiates that profound, interstitial meaning. In the current electoral fandango, candidates have banked on the idea that voters won’t care whether what they are being told is true so long as they like its emotional thrust. Let all of us in this room stand for the higher use of language—on sustaining truth when powerful forces seem hell-bent on annihilating it.

With the phrase, “The freedom to write,” we contend that what is said through high art, via journalism, or by anyone voicing a well-considered opinion, are all connected. If reporters don’t find common cause with novelists, if essayists do not recognize the activists who confront corrupt power, we will all be diminished. There is no such thing as free speech only for writers. William Carlos Williams declared, “It is difficult to get the news from poems, yet men die miserably every day for lack of what is found there.” At PEN, we hold free speech to a high standard: free speech entails the news that censors wish to hide, and the poetry that reveals our nature to us.

A good book is both a window and a mirror; it allows us to see things we’d otherwise be unable to imagine, but it likewise reveals us to ourselves. Sometimes, the mirror is harder to face than the window. It is becoming so now. The German natural scientist Alexander von Humboldt once said, “The most dangerous worldview is the worldview of those who have not viewed the world.” We cannot view the whole world physically, but we can encounter it by reading. Opposition can weaken speech, but it can likewise strengthen it; those whose speech is most constrained are often the ones who whisper with greatest urgency. We at PEN are a noisy, obstreperous lot. Silence is not so golden around here.

No one who cares about literature will forget the image of children lining up outside bookshops as they awaited J. K. Rowling’s next release, drawn along by delightful storytelling that is also exquisitely moral. Those who read Rowling’s work emerge better suited to build a principled world; my eight-year-old daughter has asked deeper questions since she started these books that bespeak both joy and decency. It is a privilege to have J. K. Rowling with us tonight.

A free-speech organization advances the freedom to be heard. Tonight, we honor Lee-Anne Walters and Dr. Mona Hanna-Attisha, the women who exposed the inconceivable disgrace of the poisoned water supply in Flint, Michigan. The voices of the disenfranchised are seldom heard by those elected to represent them; these two women made their cause audible even as local and state governments tried repeatedly to discredit them as hysterics.

We also honor Ahmed Naji, who languishes in prison in Egypt, where a constitution that protects the rights of writers and journalists is flouted unabashedly.

We think tonight of others on whose cases PEN is working, too many to list here. Among them, Ashraf Fayadh was sentenced to death in Saudi Arabia on grounds that his poems that were an “incitement to atheism”; we joined the effort through which his sentence has been commuted to eight years in prison and eight hundred lashes, which is said to constitute benevolence and mercy.

From Russia to Nigeria, the persecution of gay people violates their civil liberties. Without free speech, gay people can achieve no open, authentic selves.

PEN is in conversation with whistleblowers, from Edward Snowden on down, who have lost their jobs, their reputations, and even their freedom because they dared to speak out.

We recognize Black Lives Matter; women silenced by misogyny; people yanked off airplanes here because their seeming to be Muslims made others “uncomfortable.”

In February, PEN brought a delegation of freedom-defending Russian writers to the United States. We talked about how Russians have become vulnerable to propaganda, but also how we are deluged with it. Commenting on Putin’s supposed 85 percent approval ratings, the renowned novelist Ludmila Ulitskaya characterized the meeting as “our 15 percent speaking to your 15 percent.”

Too easily, our personal right to privacy gets conflated with government’s undue secrecy. Too often, our need for security is put forward to justify intrusive surveillance.

The first award presented tonight is the Jeri Laber International Freedom to Publish Award, named for munificent PEN Trustee Jeri Laber, who is here tonight. It is given to a publisher outside the United States who has demonstrated exceptional bravery, and this year goes to Bangladeshi publishing house Shuddhashar. Shuddhashar has incurred the wrath of Islamic extremist groups for printing secular and rationalist work. PEN has drawn the world’s attention to a pattern of murders of secular bloggers and publishers in Bangladesh, many of whom have been hacked to death. We have spurred the United States to offer safe haven to those most at risk, and are galvanizing the United Nations to act as well. Mahbub Leelen joins us tonight on behalf of Shuddhashar. We salute you for your fearless battle against censorship at great personal risk. Would you please stand?

Now please join me in welcoming Donna Tartt, the Pulitzer prize-winning author of The Goldfinch, to bestow the publishing award on Michael Pietsch. Thank you.