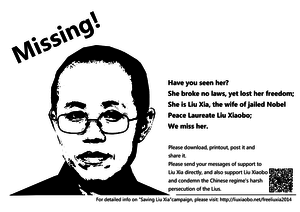 In 2011, a social media artist named Crazy Crab launched a viral Internet meme campaign he called the “Dark Glasses Portrait,” calling on people inside China and around the globe to photograph themselves wearing sunglasses and posting them to his website to raise awareness of the plight of blind legal activist Chen Guangcheng, who was being held under extralegal house arrest at the time. The campaign worked, people started asking questions and trying to visit him, and in 2012, Chen, with the help of friends and activists, escaped to freedom. Now, a group of activists has launched a similar campaign for Liu Xia.

“Saving Liu Xia” calls on netizens, as well as your regular wheatpaste-toting activists, to spread an image of a “Missing” poster around their workplaces, around their towns, around their cyber villages. This is not only for westerners. The group has formulated a contest to see who can post the image closest to Liu Xia’s home in Beijing.

Are you up to the challenge? We think this is an amazing kind of advocacy. Liu Xia’s neighbors will know. Shoppers will know. Moms and dads taking their kids to school will know. And the government will know that people are concerned about this missing person.

Spread the image however you can, through your social networks or up on your bulletin boards. And keep watching the Saving Liu Xia homepage to track its progress.