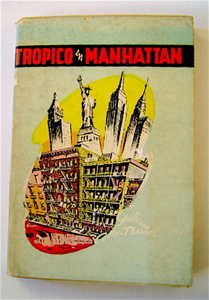 J. Bret Maney is the recipient of a 2014 PEN/Heim Translation Fund Grant for his translation of Manhattan Tropics by Guillermo Cotto-Thorner. Read an excerpt of the translation here.

The first novel about the Puerto Rican mass migration to New York City, Guillermo Cotto-Thorner’s Manhattan Tropics (1951) offers a rare window into mid-century life in Spanish Harlem. Through scores of vignettes of characters living and working in El Barrio, Cotto-Thorner captures the joys and trials of a host of colorful mid-century types: boxers, racketeers, students, ministers, gossips, communists, lotharios, ballplayers … Among these characters, the novel’s protagonist is Juan Marcos, a young, middle-class Puerto Rican who moves to New York after graduating from university and working as a high school teacher on the island. Juan Marcos registers his impressions—by turns astute or green, overheated or doleful, funny or stark—of his adjustment to city life, the English language, and American mores, as well as his effort to fulfill his ambitions in the American metropolis in spite of prejudice and unequal opportunity. Trained as a sociologist, Juan Marcos proves to be a sharp cultural critic, quickly zeroing in on issues of class, ethnicity, gender, and language. Over the course of the novel, he becomes a passionate defender of New York’s Puerto Rican community.

I first learned of Guillermo Cotto-Thorner’s unfairly forgotten first novel from a colleague who was studying with the Puerto Rican scholar Juan Flores at NYU. Reading the novel, I became fascinated with Cotto-Thorner’s use of Spanglish neologisms, which he calls Neoyorquismos, and the glossary of these words he places at the end of the book. His energetic use of Spanglish at a time when many Puerto Rican intellectuals were engaged in a vituperative defense of the “purity” of Spanish against English-language contamination makes Manhattan Tropics an important literary forerunner of Nuyorican writing. The novel’s early adoption of Spanglish should win many adherents on the current literary scene, especially in the wake of Junot Díaz’s national success, which has given North-American readers a greater appreciation for code-switching and bilingual aesthetics. I decided to translate Manhattan Tropics when I came to grasp its significance as a historical and artistic document; as the first novel of the mid-century Puerto Rican diaspora in New York City, it ranks as a foundational text of Latino literature. The inclusion of excerpts in recent canon-making anthologies like Herencia: The Anthology of Hispanic Literature of the United States (2002) and The Norton Anthology of Latino Literature (2011) provided me with encouragement to recover this important out-of-print work and make it available in the first full English translation. Manhattan Tropics will appeal greatly to readers with an interest in Puerto Rican culture, migration narratives, and, more generally, the formation of Hispanic communities in the United States. The novel is also, and perhaps above all else, the narrative of an encounter with New York City, a paean to the careening, noisy street life of Manhattan in the middle of the last century, and an early installment in the history of the “latinization” of Nueva York.