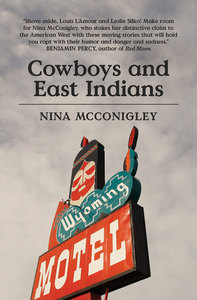 In Cowboys and East Indians, Nina McConigley gives us Wyoming precisely the way we expect it—in landscape, sky, and animal life—and in ways we don’t. The inhabitants of this surprising, thrilling, and richly textured short story collection are unpredictable, both in their actions and identities. A crossdresser, a kleptomaniacal foreign exchange student, a disabled mother, and others share a domestic setting—featuring trailers that look like dollhouses, motels whose rooms are identical, no matter the city they’re in—reflecting the stuckness and wanderlust of the collection’s characters, who are insider/outsiders in every sense. In these stories, McConigley has shaped a work destined to be a classic, like Sherwood Anderson’s Winesburg, Ohio. Its characters—Indians in America, Americans in India, and Indian-Americans in both places—echo Vonnegut’s statement that “Out on the edge you see all kinds of things you can’t see from the center.” It’s electrifying to be out on the edge with this book.

Nina McConigley is the winner of a 2014 PEN Open Book Award for a Distinguished Work by an Author of Color.

We were the wrong kind of Indians living in Wyoming. There were Arapahoe, Shoshone, even some Crow. And then there was us.

We were the only brown faces in school and they called us niggers. The first time, I was ten. Before that, I’d just been invisible. I was playing tetherball during recess with my cousin Kamal. I was winning. A group of sixth grade boys wandered by and said to us in loud voices, “Hey niggers, why don’t you go back to the cotton fields?”

Kamal kept hitting the ball; it wrapped tight around the pole. I knew enough to be ashamed. Kamal was older than me, but had only been in the US for four months; he was still slow with his English. Dried Sloppy Joe ringed his mouth, his breath made clouds in the cold air. I took his hand and we waited by the main doors for recess to end.

Home from school, I sat drinking my Tang and eating my samosa.

I burst into tears. Those boys were smart. In the spring they would be gone for calving; in the fall, hunting. They lived on ranches and would all have hardship licenses in two years. Kamal sat quiet eating his samosa, his fingers slick with grease. He was the wrong kind, I thought. My mom asked him what had happened.

“Athai, some boys called us Snickers. I don’t mind. Snickers taste good, no? It must be because we are dark.” He continued to eat.

His affection for chocolate had grown in the four months he had lived with us. He liked that chocolate didn’t melt here like it did in India. He was growing fat.

Purchase a copy of the book from FiveChapters Books or Powell’s Books.