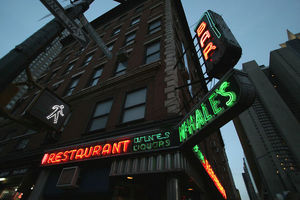 This piece was submitted by Susan Choi as part of the 2014 PEN World Voices Online Anthology.

Susan Choi’s event: Workshop—Susan Choi on The Role of “Place” in Creativity and Storytelling

Once upon a time there were bars that were simply for drinking, in much the way there were coffee shops simply for eating. Apart from a difference in lighting, their spirit and aesthetics were largely the same. That you knew what to expect, walking in, was an asset. Affordability was assumed, not considered a signal of dubious quality. Those items on offer were as familiar and iconic as the neon sign outside, as the chrome stools lining the counter or bar. There might be powdered donuts on display, or a wire rack of chips. The printed menu, whether coffee shop or bar, was wholly unnecessary. Only a time traveler or a Martian might not know how to order: grilled cheese sandwich or Manhattan, two eggs over easy or a bottle of beer. Coffee shops and bars were for people, they weren’t for themselves. They comforted us and served us, they enabled our communion or our solitude. They didn’t demand recognition for artistry, or purity, or irony. They didn’t grow their own mint for mojitos. They didn’t try to outdress or abash their patrons as if they were the first punk-rock kid in sixth grade. They were brisk, adult places, far more about the working lives of their patrons than they were about leisure. They fit themselves in—to available time and available budget.

I think of them longingly now, deep into my adulthood, when, bewilderingly, they’re as rare as they once were ubiquitous. Every place to eat and to drink now—of course I mean in New York, perhaps elsewhere things are still as they were—is some sort of performance. When I want to just have a drink with a friend, I have to sort through the whole range of potential experiences in an effort to choose the right one. With the sorts of extinct bars I’m talking about, you simply chose the nearest, most comfortable one. For me, for a long, happy time, that bar was McHale’s.
Oh, how unexpected to be one of those middle-aged cranks who extols the superior past! Get a load of the antiquity of my remembered scene: when I first started going to McHale’s, sometimes I’d leave my fact-checking job at a magazine so late they’d already be loading the next morning’s paper, damp off the presses, into the big idling New York Times trucks all along 44th Street. The quality of the light in Times Square was different then, and not just because of the haze of nostalgia. There really was quantitatively less light, and qualitatively different light, most of it incandescent, with a palpable, bodily warmth. It was still the same light Hopper painted, fifty years earlier, in “Nighthawks,” and it was the same light you glimpsed through the windows, approaching McHale’s. The neon sign projected from the deco-style corner entrance like the bowsprit from a prow; and once inside there was the pleasure of everyone else looking hale and glad, the way everyone does in the light of a campfire.
At that time of my life there were a lot of through-the-looking-glass bars, where after a certain hour the laws of nature and even of gravity seemed not to hold, and adventures were had that were thrilling but squalid, that you retold like exhibiting scars. McHale’s wasn’t like that. It was, after all, equal part restaurant, renowned for its burger, although in my experience most meals there occurred hours into a night of convivial drinking, to enable the drinking to last that much longer. Yet I never had a binge night at McHale’s. I never lost two or ten hours in the blink of an eye, or the well of a shot glass. I never sang Cats with the bartender, or drank for free from two a.m. until dawn, or had my shoes pissed on because the man next to me at the bar didn’t want to waste time meant for drinking locating the bathroom. There was no dying parrot nor oracular crazy old woman. I never fell in love there, or did coke off the toilet seat, or even so much as danced to the jukebox. For all those reasons, for a long time I undervalued McHale’s—the Wayne Gretzky hockey stick over the bar, the unremarkable after-work crowd, the squeeze bottle of French’s mustard. It was equally close to my office as it was to the subway I took to get home, so that I didn’t realize it was worth traveling for because I’d never had to. It didn’t occur to me that the seeming ordinariness of its ability to meet my every need, to be just the place that I wanted, one evening after another, was in fact painfully rare, so rare I’ve never found it anywhere since.
In the late 90s I left my job in midtown, and not long after that I left Manhattan entirely and joined the exodus to Brooklyn. I don’t remember the last time I went to McHale’s. It wasn’t the bar that I sat in the day the Twin Towers came down, or the bar to which my husband and I lugged our newborn son straight from the hospital, tinily strapped in his bulky car seat, so I could have my first post-partum beer. As easily as it entered my life, McHale’s—that welcoming ship on calm water and strung with warm lights—slid away.
It was years before I passed by that corner again and realized where I was, facing the cold gray façade of a steel and glass high rise almost laughable in its total adherence to the Death Star architectural style. Before the McHale’s building was sold by its landlord to New Jersey developers, who tore it down in 2006 to build luxury condos, McHale’s had been run by the McHale family since 1953. The same cook, Italo Huaringa, had been making those mythical burgers for 35 years. The bar had come from the 1939 World’s Fair. These were facts I hadn’t known, when I drank there—but no sum of the facts can explain why that place felt like home. Standing there on that sanitized corner, I was sick to my stomach with loss. McHale’s had been a club for all of us, and now not just the physical place, but that very idea, seemed by some selfish power destroyed. I didn’t realize how much McHale’s mattered until it was gone.

This essay is forthcoming in the anthology Come Here Often?: 52 Writers Raise a Glass to Their Favorite Bar, edited by Sean Manning, to be published by Black Balloon Publishing in October 2014.