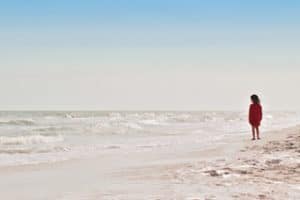 This week in the Guernica/PEN Flash series, we feature a piece by Sara Majka. Subscribe to the series and get new flash delivered to your inbox twice a month—no spam or news, just stories.

Or another Portland story, one of those heard and almost forgotten, told late at night, when no one has anywhere to be and you’re not sure if anyone is talking. Maureen had been the bartender at the Regency Bar for nearly 20 years. The place was under the highway ramp, and had dark wood, torn covers in the booths, and old lamps, though this wasn’t lovely in the way this might suggest, just generic. Most of the men drank Bud from bottles and sat for a long time, and sometimes, on slow nights, Maureen would lean over and talk to them. She had been beautiful when she started, and most of the men could remember that. One night she told them about being at the beach with the man she had once been married to and their baby daughter. It was easy to see a younger Maureen on the shore, wearing a stretched-out bathing suit and cutoffs, her long hair greasy but shining. Already some of the weight gained, but it would have looked good on her. There would have been something sympathetic in the thickening under her arms. And her husband, thin and bare-chested, a mustached man spread across the blanket, with their baby playing in between. The two of them drinking cups of beer, and afterward walking barefoot through the parking lot, teetering on pavement embedded with small rocks. The shock of the hot car, then lifting the baby in and buckling her, careful not to clip the fact of her legs.

The baby had died later, a few years later, in a car accident. Maureen had been newly divorced when it happened. She had just moved into the apartment and her ex came on Saturdays to pick up the girl, Clarice. That morning Maureen could tell he had been drinking, but still, she helped her daughter into her coat and went back upstairs. She enjoyed the empty apartment. She would do nothing—pick up laundry, smoke a cigarette, take a bath. She had been lying in bed, watching the curtain, smelling her shoulder, when the phone rang.

After that time, she felt there was something wrong with her, that she was empty in ways she shouldn’t have been. That emptiness prepared her for what she saw on the town green one day, years later—a little girl who looked like her daughter, in a group with other children, being led down a path. She looked to see if anyone else noticed, thinking perhaps they were an imaginary thing that had come to fill the space. But other people, too, saw the children.

The next time, she followed them to story time at the library. She stood outside the children’s room in the basement, watching the kids, then went to the information desk and asked if she could read. Well, the woman said, it’s usually the librarian or someone at the senior center, but we always like help here. So on Tuesdays she put on her good dress, a thin spring dress she had owned for years, and brushed her hair while watching the old man in the garden out her window, the old man working his tomato patch in a green hat, moving over the earth like a delicate animal. She didn’t look at him when she backed out of the drive, but felt he knew.

Afterward, after reading at the library, she would smoke by the fence and try not to get too close to what was happening. She felt if she moved smoothly enough, without sharpness or rise in her voice, if she didn’t pay attention, or look closely, only watched from the corner of her eyes. . . The few times she approached the girl were an allowance. Did you like that book? she had asked her. What she must have seemed to the little girl, with her off-voice and stifled inconsistency. She wasn’t in control, but felt if she moved slowly, almost crept, that nothing would startle and break loose.

When her ex-husband appeared at her door one day, she thought it was a harbinger, the very thing she was trying to avoid. It reminded her of the Saturdays when he had picked up their daughter. Opening the door was like that, too, except he was older and it hadn’t done well for him. It was as if they had agreed on this play, but their aging and lack of reason made it a pitiful thing. She looked past him to see if the man was in the garden, but she didn’t see him. What do you want? she asked her ex-husband. He held up his hands, Just to talk to you. She asked him to wait while she put on shoes. Upstairs she tied her raincoat, put on flats. She looked out the bathroom window for the old man but still didn’t see him and wondered if that was a bad omen.

They walked to the corner bar, slipping inside the door. They stood near each other. It was midday and nearly empty. He was more lost than she was. It occurred to her that he was drunk, but she couldn’t tell. Do you still drink the same? she asked. He offered to get it, but she thought he might not have money, and said, No, I’ll get it, find us a seat. He picked a booth along the side wall; tinted windows showed a yellowed version of the empty street. She bought one drink and sat at the edge of the seat, sliding it to him.

I’m sorry, he said. I didn’t think of what I would say. He wrapped his hands around the glass. Instead of looking at his face, she looked outside. It was raining, what looked like yellow rain on a darker yellow sidewalk. I’m getting married again, he said. We’re going to move to Florida. I’m going to start up a bar there. He waited for her to say something. She said that she had to go. He reached for her, but she slid from the booth.

On the sidewalk, she put a hand in her purse and fumbled with her cigarettes. She lit one, threw it down, walked back to the bar. She stood in the entryway. There was a man in the far booth where they had been. He was tall, lanky, dark haired. She took steps toward him, but his features aligned into those of a stranger’s.

During her shifts she often smoked to steady herself. You could see her out there, holding her sweater closed with one arm and turning away from the wind. She looked like those women you find in rural areas who have kids, do the cooking, and work, who have no femininity in them, but also nothing hard, it was just that life had brought them to having no extra gestures.

Sara Majka is the author of the story collection Cities I’ve Never Lived In (Graywolf/A Public Space), out in February 2016. Her stories have been published in Guernica, Brick, American Short Fiction, A Public Space, VQR, and PEN America, among other places. She is a former fiction fellow at the Provincetown Fine Arts Work Center.