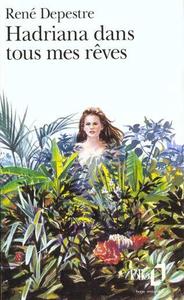 Kaiama L. Glover is the recipient of a 2016 PEN/Heim Translation Fund Grant for his translation of Hadriana in All My Dreams by René Despestre, one of the most prominent figures in Haitian literature. Read an excerpt of the translation here.

I have been smitten with René Depestre’s Hadriana in All My Dreams since first encountering the novel fifteen years ago in grad school. At a time when I was learning how to think and write about francophone Caribbean literature in ways that resisted exoticizing or otherwise “othering” cultures not my own, it was hard to know what to do with this fantastic tale of a beautiful French virgin, predatory Vodou sorcerors, and, yes, zombies. In an intellectual space where the ethics and politics of literature were cornerstones of endless and earnest seminar discussions, I was more than a little thrown by the unabashed erotic charge and seeming frivolity of Depestre’s novel. But as I hope readers of my translation will discover, things truly are not (only) what they seem in this story. Although set against a backdrop of magic, fantasy, and desire, and recounted with delirious humor, Hadriana brings to the fore universal questions of race, sex, politics, and folk modernity. The reader comes away at once enchanted by the marvelous reality of Haiti’s culture and convinced by Depestre’s lusty claim that all beings—even the undead ones—have a right to happiness and true love.

Hadriana marks the culmination of the three decades Depestre spent traversing the globe in the wake of his final exile from Haiti in 1958. He wrote Hadriana while in France, where he had been living since being ousted from Fidel Castro’s Cuba in 1978. Depestre began drafting the novel in the period immediately following the overthrow of President-for-life François “Papa Doc” Duvalier’s son, President-for-life Jean-Claude “Baby Doc” Duvalier, in 1986—a period of both extreme violence and wary hopefulness in Haiti. Indeed, after 30 years of unchecked exploitation and brutalization by the father-son duo that had kidnapped the State, the people of Haiti felt newly liberated in this moment to begin imagining alternatives. For Depestre, however, such a crossroads moment of possibility born in violence was nothing new. It was a phenomenon he had lived many times before. By the late 1980s, Depestre had been a militant Marxist for most of his life; he had believed fervently in the possibility of political, social, and cultural revolution but, time and again, had seen revolutionary projects fail thanks to the ambitions of charismatic, but ultimately corrupt, leaders.

I have always understood Hadriana as Depestre’s effort to face these disillusionments while still maintaining a measure of optimism. Because while the novel indulges in—and entertains with—evocations of the tropical, it is also a highly sophisticated work of social satire. Its irreverent, ribald plot pokes fun at ignorant extra-insular portrayals of Haiti and critiques the workings of power within the nation itself. It is a meditation on Caribbean history, a love-song to a lost homeland, and a cautionary tale; it tells Depestre’s complex relationship to a home he has inhabited solely through the detritus of memory and the gift of his imagination.

As a Caribbean literature professor at a US-American faculty in a New York City institution, translating this novel has particular importance for me. Several of my students are first-generation Haitian-Americans who read and write in English—not French. So I have been a firsthand witness to the phenomenon whereby a transnational population finds itself alienated from certain aspects of its cultural patrimony. It seems to me, then, especially crucial that this work be made accessible to those whose experience of migration in some ways resembles Depestre’s. And insofar as Depestre is an incontrovertible pillar of the Haitian literary canon, his celebrated contribution to world letters ought to be read by those who can and should claim him as their own.

René Depestre is a Haitian poet, novelist, and former communist activist who writes in French. A prolific writer, he has won the Prix Apollinaire and the Prix Renaudot. After he was exiled from the Duvalier regime, Depestre then resided in Paris, Brazil, and Cuba. He is also a founder of the Casa de las Americas publishing house. and a special envoy of UNESCO for Haiti.

Kaiama L. Glover is Associate Professor of French and Africana Studies at Barnard College, Columbia University. She is author of Haiti Unbound: A Spiralist Challenge to the Postcolonial Canon (Liverpool UP 2010), co-editor of Marie Vieux Chauvet: Paradoxes of the Postcolonial Feminine (Yale French Studies 2016), and translator of Frankétienne’s Ready to Burst (Archipelago 2014). She has received awards from the National Endowment for the Humanities, the Mellon Foundation, and the Fulbright Foundation. She is a recipient of a 2016 PEN/Heim Translation Fund grant for her translation of Hadriana in All My Dreams.