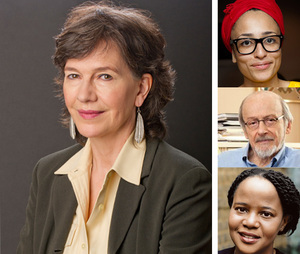 PEN is pleased to announce that Louise Erdrich has been named the winner of the 2014 PEN/Saul Bellow Award for Achievement in American Fiction, selected by award judges Edwidge Danticat, Zadie Smith, and E.L. Doctorow, who won the award in 2012. Established in memory of Nobel Prize-winning author Saul Bellow, the $25,000 award is presented biannually to a living American author whose scale of achievement in fiction, over a sustained career, places him or her in the highest rank of American literature.

“Such prestigious awards as the PEN/Saul Bellow Award exist as a way for us to pay homage to a writer whose literary impact is profound,” said Peter Godwin, President of PEN American Center. “PEN is thrilled that this year’s judges have chosen to recognize the remarkable career of Louise Erdrich. Her influence spans generations and crosses cultural boundaries. In its ambitious scope and its commitment to issues of social justice, Erdrich’s work truly embodies the spirit of this award. It is PEN’s great pleasure to honor her and her extraordinary contribution to American fiction in this way.”

Erdrich exploded onto the literary scene in 1984 with her National Book Critics Circle Award-winning novel Love Medicine, which follows 60 years in the lives of a small group of Chippewa Indians—a band of which Erdrich herself is an enrolled member. In her nearly forty novels, short story collections, poems, and children’s books since, Erdrich has often brokered the delicate politics of the American Indian Reservation System and explored the relationships between its residents and the adjacent communities. Her most recent novel, The Round House, won the National Book Award for Fiction in 2012.

In their citation, the judges said of Erdrich’s career, “Some writers work a small piece of land: Louise Erdrich is not one of those writers. Her work has an awesome capaciousness – each person is a world. For Erdrich, the tale of the individual necessarily leads to the tale of the family, and families lead to nations, while the wound of a national injustice is passed down through the generations, expressing itself in intimate deformations, a heady intertwining of the national and the personal. Yet despite the often depressingly familiar, repetitive nature of so much human business, Erdrich’s eye is always fresh, her sentences never less than lyrical.” To read the judges’ full citation, click here.

Erdrich, along with all 2014 PEN Award winners, will be honored at the 2014 PEN Literary Awards Ceremony on September 29 at The New School in New York City.