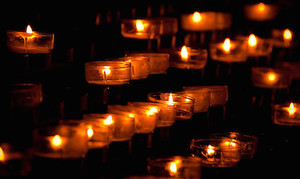 This week in the Guernica/PEN Flash series, we feature a piece by Nicola Gardini. Subscribe to the series and get new flash delivered to your inbox twice a month—no spam or news, just stories.

The snow had already blanketed the stairs and the pine grove. It fell at a regular pace, thick and dry.

My father had on a blazer and tie, my mother a dark dress that Signora Dell’Uomo had given her a few years ago, with a smattering of sequins around the hem and the neckline. “How does it look on me?” she asked. It was the first time she was wearing it.

“You look like a real signora,” my father teased her. We picked up the baking dishes full of food and headed to the building next door. My mother struggled to walk in the snow. She held onto me, afraid she might fall, and shivered from the cold because her dress was too light and her overcoat wasn’t long enough. “What the hell is going on back there?” my father exclaimed while we were going through the gate.

“I’ll wait for you at Gemma’s,” she said, without turning around.

At the other side of the garden, some of the tenants had assembled around the fountain to pray. Each of them held a lit candle in their left hand, while their right was cupped around the flame to keep it from being snuffed out by the snowflakes. Pale, motionless, with their faces illuminated from below, they looked like a gathering of the dead. The seamstress was there, too. Signora Dell’Uomo’s husband officiated. On behalf of the whole apartment complex he invoked the name of Christ the Savior, beseeching him to protect those present and their loved ones, granting health and prosperity to everyone, and easing the difficult road that lay ahead. “Blessed be the day that Christ the Savior was born!” he intoned. And the others behind him repeated, “Blessed be the day that Christ the Savior was born!”

In addition to us, Gemma had also invited Carmen and her husband. Her boss had granted her the use of the conference room on the ground floor for this special occasion. We occupied only one end of the long table, which was barely covered by the tablecloth.

I wasn’t hungry. Instead of eating, I looked through the big picture windows at the falling snow and thought about the Maestra. How much more I wanted to be with her! Although I tried hard not to cry, my cheeks were moist with tears. Luckily no one noticed. My parents and their friends were only paying attention to the food and the conversation. The women complimented each other’s recipes and gossiped about the other people in the buildings. The men told dirty jokes freely, as if I couldn’t understand.

Once the first course was over, I stood up with the excuse that I had to go to the bathroom. I went to the end of the hall and snuck down the cellar staircase. The lights were off, but from outside, the reflection of the streetlights shone through the high grating. I was terrified, but I had no intention of returning, of sitting back down, of pretending to be cheerful. I curled up between two piles of boxes and, after having a good cry, fell asleep.

I was awoken by music. I didn’t know how much time had passed. Maybe an hour. I went back upstairs and into the conference room. The table had been pushed against the wall and the men were in the middle of the room, dressed up like women and dancing. Leaning against the opposite wall, the women were clapping their hands. My father seemed to be enjoying himself the most. He wiggled his ass and the fake breasts, twirling around and around. The other two men aped his movements. What embarrassed me the most, even more than my father’s dancing, was my mother’s enthusiasm. She pointed at his naked thighs and laughed so hard she had to hold her sides. Gemma and Carmen were also gesturing toward their husbands’ hairy legs and almost competing, breathlessly, to see who could laugh the loudest. Roaring with laughter, they threw orange peels and twisted napkins at their husbands’ crotches. I thought to myself, “If the Maestra could see us now…”

Before midnight we collected our baking dishes because my mother wanted to go to mass. My father protested that he was tired, but eventually he gave in.

In church we had to find room in the back, in the last available spots. After we were seated, we realized that the pew in front of us was occupied by the Rovigos and the Paolinis, and we hadn’t spoken to them since the day that Rita had fallen in the fountain. My father was so tense he couldn’t listen to a word of the sermon. A second before the Sign of Peace he tried to escape, but my mother held him back by his coattails. “Stay where you are,” she whispered into his ear, “the last thing we need is to feel like we’re not even free in the house of the Lord!”

Padre Aldo commanded, “The time has come to exchange a sign of peace,” and the Rovigos and Paolinis shook each other’s hands. When they turned around to shake the hand of the persons behind them, they were startled to find themselves facing the doorwoman’s family. For a second I thought they would turn back around, but they didn’t. Once they got over their surprise, they extended their hands to us. But they did not look us in the face. Nor did they say, “Peace be with you.”

Nicola Gardini lives in Oxford and Milan. Gardini’s first novel to be translated into English, Lost Words, was awarded the Viareggio Prize and the Zerilli-Marimo/City of Rome Prize. A Fellow of Keble College, Oxford, Gardini teaches Italian literature.

Michael F. Moore, chair of the PEN/Heim Translation Fund, has recently translated from the Italian Live Bait by Fabio Genovesi, The Drowned and the Saved by Primo Levi, and Agostino by Alberto Moravia.