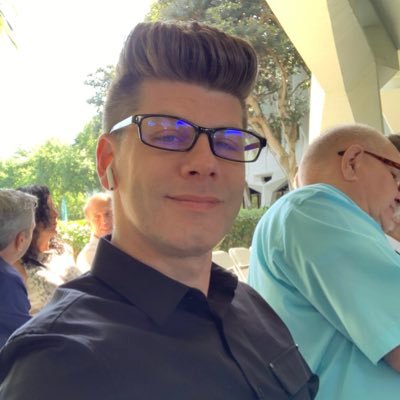 From the current slate of anti-trans legislation to HIV-specific criminalization laws, regional LGBTQ+ news reportage is needed now more than ever—and yet as PEN America has shown, strong investigative journalism at the local level, where many of these stories play out, is under threat.

This Pride Month, PEN America is highlighting the work of a group of regional journalists and news outlets that have helped cultivate an informed LGTBQ+ community. We asked a cadre of LGBTQ+ journalists and editors on why they do what they do and what must be done so their platforms can thrive.

The following is an interview with Jason Parsley, the associate publisher of South Florida Gay News. The interview has been condensed and edited for clarity.

Can you tell me a little bit about your personal origin story in regards to local news, LGBTQ+ news, and regional reporting?
When I was in college, my student newspaper advisor always asked the question: “What do you want to do when you grow up?” I said I wanted to be a gay journalist, and he helped me in that effort. After I graduated, I started working at the South Florida Sun Sentinel, which is our hometown newspaper here in Broward County, but they have a subsidiary of hyperlocal newspapers across Broward and Palm Beach counties.

There are so many small municipalities down here. I covered several different cities. Then, about three years into that gig, my college newspaper advisor sent me an email telling me that there was an opening here at the South Florida Gay News, and I should apply for the managing editor position. So I did, and I got the job the next day.

What was it that drew you to this type of work?
At first, I didn’t necessarily want to do local news. It’s just that I went to a very mediocre journalism school, so my options were limited, and that’s the job I got.

Through that job, I did end up loving local news. I really came to appreciate and understand the value of local news and how important it is to inform our communities. The way I like to explain it is that anyone can write a story about Donald Trump’s tweets, but ultimately Donald Trump’s tweets don’t affect whether I get to work that day on the highway. It doesn’t affect whether I need to scrape my windows of ice in the morning if I live in a northern city. There’s such a big disconnect between those national news stories and the everyday life that I live.

“LGBT presses are not in it to make money, per se. Of course, we want to pay our bills. And of course we want to keep our heads above water, but you have to love this. There is a love and a sense of community that the big corporations lack.”

What role does your paper play in informing the public?
In terms of South Florida Gay News, 20 or 30 years ago, the mainstream papers weren’t covering our issues. The only place to get our news was in the LGBT press. Then, that flipped; they started covering our news.  They did well sometimes, bad at other times. But what we have seen now, because of this contraction of news outlets, they don’t have the resources anymore to cover a lot of LGBT news stories.

At the Miami Herald, we had a local reporter who was one of the few LGBT issue reporters at any top daily newspaper in the country. And he retired recently. Well, they’re not replacing that gig. Even several years before he retired, he suddenly got all these other jobs piled onto him. The LGBT portion slowly took a backseat to his main job.

That is an interesting trajectory because I remember that moment when it felt like, “Hey, everyone has a LGBTQ vertical or a reporter.” And now, that robust coverage does exist at the larger papers.
The Miami Herald several years ago launched a LGBT magazine for the Miami-Dade area. We were a little upset because we knew that that was going to cut into our advertising revenue and whatnot. And within three years, they shut down. And that’s the difference between a mainstream paper covering our issues—if they see an opportunity to make money, they’re going to take that opportunity. But if that money doesn’t come to fruition, they’re going to cut our community loose.

“I understand everyone wants the scoop and the exclusive, but sometimes stories to me transcend that, and they just need to be out there. And it doesn’t matter if I have exclusive rights to it in South Florida. I want that story out there.”

Maybe I’m too noble in that way because I understand everyone wants the scoop and the exclusive, but sometimes stories to me transcend that, and they just need to be out there. And it doesn’t matter if I have exclusive rights to it in South Florida. I want that story out there. One story we just did was about the South Florida Asian queer community. I don’t think anyone’s covered it. We did a huge story on it. My reporter said, “Can I send this to the Philadelphia Gay News and some other publications?” I said, “Of course, anyone that wants to run it, go for it, take it.”

Is there any piece that you worked on that you feel changed the narrative or created a narrative that did not exist about a certain issue or topic?
There have been several controversial stories we’ve written over the years, mostly on holding our own LGBTQ community leaders and politicians accountable, in ways that the mainstream press just ignored

Florida has been getting a lot of press about their recent anti-trans bills. How has your paper responded?
Well, one of our cover stories a month and a half ago was about these bills. I initially wanted to focus on educating the community, because oftentimes the role of informing the public gets lost in the actual heat of the moment.

I was at dinner with some gay friends of mine recently, and I realized that they were not so much on the conservative side of the issue, but to me, they were using conservative talking points. I realized that even in our own community, people need to be educated on these issues, in an expansive way beyond a sound bite.

We, as a journalist, as a newspaper, must be the ones that delve deeper and help people clearly understand complex topics. A reader contacted me about these anti-trans bills and said, “Jason, will you do a story about this? Because I need to be educated. I don’t understand it. And I think it would be helpful if people actually understood it.”

What are some of the things that you think can help navigate some of the struggles in the local news landscape?
When it boils down to it, it’s more money. To do our jobs, we have to be funded. We’re very lucky we survived the pandemic and came out still standing. But it was a hard year. It is just advertising: That’s what keeps us afloat. We don’t have a subscription. We’re a free newspaper. All the LGBT newspapers are free. A lot of the alternative press is free. They don’t charge. And so, those ad dollars—we rely on that. We depend on that. We recently launched a donate button so that just the readers could just give us money if they so choose. We’ve raised a little bit of money—not certainly enough to keep us afloat, but every dollar helps.