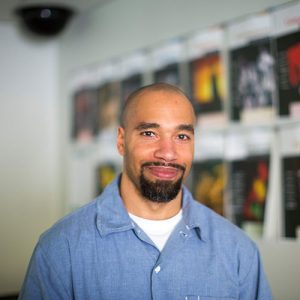 Can you share a little bit about the newspaper you work for, and your role within it?
I’m currently an associate editor for The Prison Mirror, the oldest (1887) continually published prison newspaper in the country. Some of the issues I write about include prison policies, prisoner profiles and achievements, prison sports, and criminal justice reform. I also do layouts, editing, and some photography.

What do you think is missing from the media’s coverage of how coronavirus is affecting incarcerated individuals?
I think what is missing from the media’s coverage on prisons during this epidemic is coverage on prisons. I have seen some segments on national news, but I’ve seen more coverage of advertisements for ASPCA, an adoption program for cats and dogs. I think what is also missing is coverage about the poor healthcare in prisons provided by for-profit companies. Just as this epidemic has brought attention to healthcare disparities among Blacks and Latinos, I would like to see coverage on the lack of quality prison healthcare and multiple—but preventable—deaths that occur in prisons across the country due to medical neglect and incompetence.

“Just as this epidemic has brought attention to healthcare disparities among Blacks and Latinos, I would like to see coverage on the lack of quality prison healthcare and multiple—but preventable—deaths that occur in prisons across the country due to medical neglect and incompetence.”

What do you consider to be the biggest threats to the speech rights of reporters covering COVID-19 within prisons and of incarcerated writers, reporters, and sources?
I think one of the biggest threats to the speech rights of reporters, especially incarcerated reporters writing about COVID-19, are policies and rules that allow anything to be considered a “security threat” or “inciting a riot.” Just as society had “black codes” that could be loosely interpreted to arbitrarily punish a class/race of people under the guise of an unbiased law as written, prisons have their own vague rules that they never have to qualify or be held accountable for. The phrase “security threat” is accepted as justification and enough of an explanation in itself.

As many newsrooms turn the bulk of their focus to COVID-19, they will lose the capacity to do much of the vital watchdog, accountability, and solutions journalism they normally do. What is one story you fear may be eclipsed by the media’s focus on COVID-19?
One of the many, many, stories I fear may be eclipsed by the coronavirus is immigration. Particularly, the slave trade that continues in America today. Whether it’s the labor slave trade or the sex slave trade, current U.S. policy seems more concerned with sending back Dreamers—Americans by values, family, ethics, culture, contributions, and many other accounts other than birth—than addressing its original sin. Slavery did not end in 1865. Many migrants are taken advantage of and sold into slavery right here in the United States, and U.S policy doesn’t do enough. U.S. corporations are culpable. U.S. media that don’t scream at the top of their lungs and investigate are culpable. Even those who are descendants of slaves—who provided slave labor working for free in penitentiaries and got out, who are here only because of Harriet Tubman and the likes—are culpable if we don’t ring the alarm.

“I think one of the biggest threats to the speech rights of reporters, especially incarcerated reporters writing about COVID-19, are policies and rules that allow anything to be considered a ‘security threat’ or ‘inciting a riot.’”

What books, poems, or other creative media have you been turning to for comfort or inspiration?
During this time of the pandemic, I’ve read Tao Ching by Stephen Mitchell, The Book of Awakening by Mark Nepo, Not That Bad by Roxane Gay, Twenty Chickens for a Saddle by Robin Scott, and Bodega by Su Hwang. I’ve also written several poems around the themes of race and domestic violence, and bopped my head to my daughter’s favorite musical artist Billie Ellish, as well as some of mine—Alicia Keys, The Manhattans, Buju Banton, Boosie Badazz, and Mozart.

Jeffrey Young became interested in writing after his freshman English composition class at Grambling State University. But after graduating, he really didn’t write much until his incarceration. Writing helped him believe he still had purpose and could contribute something to his community. He is currently a student in the Minnesota Prison Writing Workshop program and first started journalistic writing in 2011 when the Minnesota Spokesman-Recorder, the state’s longest-running African-American owned newspaper (since 1934) offered him a monthly column called “Reaching Out From Within.”

An audio emerged of what is said to be a Belarusian Interior Ministry official discussing plans to build an internment camp, complete with barbed wire, for political prisoners https://bit.ly/39SBgUr. Sign our letter in solidarity with Belarusian people: https://bit.ly/30Uw4w0.

Weaving together first-person narrators & Cherokee folklore, Brandon Hobson's novel THE REMOVED is one of the most anticipated reads this winter. Join us for a special #PENOutLoud conversation with @bwhobson & @rebeccamakkai to discuss THE REMOVED: https://bit.ly/3snBrPS.

TONIGHT: Join @ashberry813, @theSoniaG, @Eloisa_Amezcua & @SbwyBookreview founder Uli Beutter Cohen for a free workshop on how to build an audience for your writing and your literary community as part of our You Are A Writer series: https://bit.ly/385I8Nh.