Lessons for Writers from RightsCon 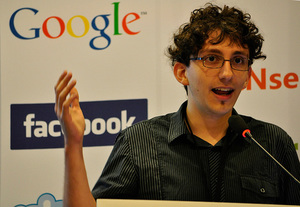 Human rights activists, technologists, corporations, and foundations came together this week in San Francisco at RightsCon, the leading U.S. conference on human rights and technology. PEN American Center joined to speak about writers and freedom of expression, and specifically to address the impact of surveillance on creative freedom.  On Wednesday, I’ll share the preliminary results from our research into the use of metaphors in media coverage of surveillance. (The answers are surprising–journalists seem especially prone to use nautical metaphors, for example.) We’ll also have an exciting panel with Adam Hochschild, author of King Leopold’s Ghost, Janne Teller, and PEN American Center Executive Director Suzanne Nossel. Meanwhile, here are three lessons for writers from the widely varying discussions of the conference.

Digital security cannot be implemented in a day.

We know that smart phones are tracking devices—they reveal our identity and location unless we manage network connectivity. We are also leaving a trail of digital data that can be exploited by would-be attackers. (At PEN, we’re especially concerned about technology because we know that 49.2 percent of the writers on our caselist were persecuted for their use of digital technologies.) This means that we need to work with writers to improve their security so that a Tweet or blog post won’t land them in jail. A variety of organizations have sprung up that provide training services, including Tactical Tech, IREX, Equalite, and others. However, after several years of working in the field, these organizations have identified that one-off trainings are rarely successful. Building security awareness takes follow up trainings and identifying champions within communities who are willing to update their training and make digital security a priority. True awareness often requires a change in mindset.

Chile may offer insight into how a net neutrality law might work.

As writers, we should be concerned about net neutrality. If you’re a blogger, the chance of your new blog being read will go down dramatically if internet service providers can choose to give more priority to customers who pay for it. Your breaking news story might be crushed under a torrent of nacho chip advertisements (more than usual, I mean).

Chile was the first country to legislate net neutrality in 2010, a bold and important step for making sure that some information is not privileged over other information on the internet. According to Chilean NGO Derechos Digitales, if an internet service provider charges privileges some information (say, from a large company) over others (from a blogger, perhaps), the ISP can be fined. This is great in practice and has been enforced. Yet, these providers are getting around the requirements by stating that they will allow net neutrality during certain hours of operation, but during peak hours they will make decisions about whether some information should receive priority over others. The lesson here is that enforcement is very important: net neutrality legislation needs the resources and capacity to manage such a regime.

It’s never too early for a company to incorporate a human rights analysis.

Early-stage technology companies may be strapped for resources. Human rights may not necessarily be a priority, but a lack of a human rights policy can have effects that harm writers. For example, quickly handing over user data to anyone who requests it would be terrible and dangerous for writers who rely upon that technology to communicate. To save on costs, companies may also rely upon a variety of third-party vendors to tackle tasks that are not efficient for them, such as hosting data on servers. The company may incorporate privacy protections into their own products and services, but a third-party vendor may not have the same policies. This becomes especially important with respect to law enforcement requests. An early-stage company with a considered privacy policy will not simply hand over user information to authorities, but this policy can be subverted if the third party hands over user information. A human rights policy will examine such contracts every step along the way.

You can watch events at RightsCon streaming live at https://rightscon.org.