Lamentations of a Coconut Tree 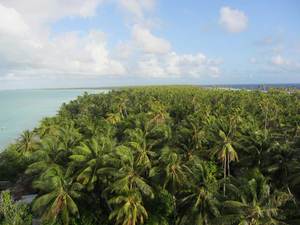 Eric M.B. Becker is the recipient of a 2014 PEN/Heim Translation Fund Grant for Selected Stories (Estórias Abensonhadas) by Mia Couto, one of the greatest Mozambican prose writers of his generation, and whose work borrows heavily from the indigenous languages and cultures of a multicultural, post-colonial Mozambique. Read Becker’s essay on translating Selected Stories here.

It was an event that made the Nation’s newspaper, official and authenticated. The buzz about the coconut groves of Inhambane was worthy of headlines and exultant columns. It all began when, seated along Inhambane’s seaside drive, my friend Suleimane Inbraímo split the shell of a coconut. From inside the fruit didn’t gush the usual sweet water, but blood. Exactruly: blood, certified and unmistakable blood. But that wasn’t the only astonishment of the matter. From the fruit sprouted a human voice, in cries and lamentations. Suleimane took no half-dismeasures: his hands, agape, dropped the coconut and blotches of red splattered about. He stood there, confwoozy, buffuzzled, spent. The shock caused his soul to dissipate in low tide.

When I ran to help, he still was in the same position, head stooped to his chest. Remains of the incident had been removed, hands washed, amnesic. Only his voice still trembled as he related the episode to me. I distrusted. Doubt, we know, is the envy that impossible surprises haven’t happened to us.

—Forgive me, Suleimane: a coconut that spoke, cried, and bled?

—I knew it: you weren’t going to believe me.

—Go ahead and ask, among these folk around here, ask about what happened with these coconuts.

I filled my chest to let my patience breathe. Strange things, I’m already used to. I even have a taste for stumbling upon these inoccurrences. But this was not the moment. We should have left that place long before. Our work had ended the week before and we still awaited news of the boat that would transport us back to Maputo. Not that the place wouldn’t allow us some minutes’ rest. Inhambane is a city of Arab manners, unpressed to enter time. The tiny houses, obscurlear, sighed in the weariness of this eternal measuring of strength between the lime and the light. The narrow streets are good for courting; it appears that in them, no matter how much we walk, we never stray far from home.

I watch in the bay the feminine blue, this sea that makes no waves nor creates urgency. But my travel companion already has a flea in his ear. When I ask about the arrival of the next boat, Suleimane wobbles, one foot then the other, as prisoners do.

The man spoke in imperfect certainty. Because in that very instant, as if issuing from his words, breezes began to swell. It squalled. First, the banana trees fanned. Gesticulant, the leaves swayed, obsolistless. We didn’t think it important.

After all, only a risk of wind is needed to fan the fruitful plants. They should be called, in that case, the fanana trees. But soon after, other greenery begin to shake in an anxious dance. Suleimane begins with a stammer:

—This squall isn’t going to allow any boat.

I sit still, ever so languid to show I have no opinion. I unwrap the little cakes I bought a short time ago from the old ladies at the market. A kid approaches. I think: here comes one more cryinbeggar. But no, the child stays beyond begging distance. My teeth are ready for the taste when the kid’s eyes grow wide, a shout rising in his throat.

I stanch my teeth, mouth in dread of who-knows-what. The boy renews his sentence: I was not to salivate on the flat cake. Explain he knew not how, but his mother came forward in sudden arrival, upon beckoning from the child. The woman entered the scene with colossal heft, grasping a nimble sarong.

—The child is right, I’m sorry. These cakes were made with green coconut, were cooked with lenho.

Only then I understand: they offended the local tradition that holds sacred the still-green coconut. Forbidden to harvest, forbidden to sell. The unripe fruit, lenho as it’s called, is to be left amid the tranquil heights of the coconut trees. But now, with the war, there’d arrived outsiders, more believers in money than in the respect of commandments.

—Many-many are these dislocated who sell lenho. One of these days they’ll even sell them to us.

But the sacred has its methods, legends know how to defend themselves. Varied and terrible curses weigh over he who harvests or sells the forbidden fruit. Those who buy it share in the fortune. The shell bleeding, voices crying, all this is xicuembos, hexes with which the forefathers punish the living.

—You don’t believe it?

The vast woman interrogates me. It’s not long before she’ll reel off her own variations, applying the principle that for he who half-understands two words of explanation won’t suffice. Even before she speaks those present click their tongues in approval of what’s going to be said. In the good country way, each one seconds the other. Exclamations of those who, saying nothing, agree with the unsaid. Only then does the woman unwrap her words:

—I’ll tell you: my daughter bought a basket way over on the edges of town. She brought the basket all the way here on her head. When she tried to take the basket off, she couldn’t. The thing looked like it was nailed down, we all used our might but it didn’t budge. There was only one remedy: the girl returned to the market and gave the coconuts back to the man who sold them. You hear me? Lend me a little more ear, right this moment. Don’t tell me you didn’t hear the story of neighbor Jacinta? No? And I add, sir: this Jacinta put herself to grating the coconut and began to see the pulp never had an end. Instead of one pan, she filled dozens until fear bid her stop. She laid all that coconut on the ground and called the chickens to eat it. Then something happened I can’t well relate: the little chicks were transformed into plants, wings into leaves, feet into trunks, beaks into flowers. All, successively, one by one.

Quieter than a seashell, I receive her reports. I didn’t want a mis-disunderstanding. Suleimane himself drank with anguish these stories of common man, fanatically creduligious. Until we were gone, leaving that place for a no-star hotel. We shared the intention to chase sleep. After all, the boat would arrive the following day. Our return trip was paid for, we no longer had to think about the spirits of the coconut groves.

Bags and suitcases tottering on deck, motors abuzz: that’s how, at long last, we made our way back to Maputo. My animated elbow brushes Suleimane’s arm. Only then do I notice that, hidden amidst his clothes, he carries with him the cursed coconut. The same one he’d begun to split open. I marvel:

—What’s this fruit for?

—It’s to send to get analyzed there at the Hospital.

Before I could draw on some reasoning, he countered: that blood, who knows in what veins it frolicked? Who knows if it was diseased, or rather, disAIDSed? He went back to wrapping up the fruit with an affection only meant for a son. Then he broke off, rocking it with a lullaby. Perhaps it was this lullaby of Suleimane’s, I could almost swear it, yet he seemed to hear a lament coming from the coconut, a crying from the earth, in the anguish of being woman.

This translation is available for publication.